Egyptian Art in the Age of the Pyramids," shown in Paris, New York, and Toronto in 1999 and 2000, is the first major, comprehensive presentation that offers a view of the fruits of ancient Egypt's greatest period of artistic achievement, the Old Kingdom. The exhibition also acquaints the general public with the results of an exciting scholarly reevaluation of this formative phase of Egyptian art that has taken place internationally during the last ten years.

Over the course of the roughly five-hundred-year duration of the Old Kingdom, Egyptians not only created the pyramids, the world's most abstract building form; on the basis of initiatives originating in the Archaic Period, they also once and for all defined the essence of their art. Centering their attention on the human image but depicting animals, plants, landscapes, and inanimate objects as well, Old Kingdom artists used stone as their primary medium. This was a material whose durability best served the culture's all-encompassing goal of defeating death, by preserving life in the form of statues and reliefs destined for tombs. Distilling the multiplicity of existence, artists created a limited number of standard types and a canon of circumscribed formal concepts that was flexible enough to allow the depiction of life's diversity through subtle variation and an infusion of innumerable realistic details. Keen observation of nature and a thorough understanding of the functioning of both human and animal bodies led to the invention of images of an organic truthfulness unparalleled at the time. As Heinrich Schäfer wrote, "Egyptians were probably the first to be aware of the nobility inherent in the human form and express it in art." That more than a sense of form is expressed in Egyptian statues becomes clear, however, when we encounter Old Kingdom art, where so much emotion is conveyed by spare, tender gestures. Compared with other periods of Egyptian history, the Old Kingdom, as reflected in its artistic legacy, emerges as a time of utter confidence in human achievement. Its images are sometimes stark and always straightforward, graced by what Eberhard Otto termed the irresistible "charm of the first time."

The concept of "Egyptian Art in the Age of the Pyramids" originated with Christiane Ziegler, Conservateur Général Chargé du Département des Antiquités Egyptiennes at the Louvre, who has herself contributed to the recent renaissance of Old Kingdom art studies with her publication of the Louvre's vast collection of Old Kingdom reliefs, paintings, and statues. In the midst of this undertaking, five years ago, she proposed to the Réunion des Musées Nationaux that Old Kingdom art from museums throughout the world should be united in a major exhibition. Her idea met with a favorable response; the project was, however, too ambitious to be accomplished by a single institution and by a single curator, let alone one who had to supervise the complete reinstallation of the Louvre's entire Egyptian collection at the same time the exhibition was taking shape. Dr. Ziegler therefore invited other curators and institutions to participate in the venture, and the Royal Ontario Museum in Toronto and The Metropolitan Museum of Art in New York joined the project. Thus Krzysztof Grzymski, Senior Curator, Egyptian Section, at the Royal Ontario Museum, and Dorothea Arnold, Lila Acheson Wallace Curator in Charge of the Department of Egyptian Art at the Metropolitan Museum, became Dr. Ziegler's partners in the planning and preparation of the exhibition and its French and English catalogues. Nadine Cherpion, of the University of Louvain, played a vital role by taking part in many discussions with Christiane Ziegler and Dorothea Arnold and writing a major essay for the catalogue. Bruce White, who photographed the bulk of the exhib­ited works, was an important collaborator in the mak­ing of the catalogue.

The idea of mounting an exhibition of Pyramid Age art arose at an exciting time in the history of Old King­dom studies. Old Kingdom works of art were first brought to light beginning in the middle of the nineteenth century, thanks to the excavations of the French Egyp­tologist Auguste Mariette and his countrymen Gaston Maspero, Emile Chassinat, and Jacques de Morgan. From the turn of the century until World War II more material was uncovered through the efforts of George Reisner, Georg Steindorff, Hermann Junker, and Selim Hassan, to name only a few of the Egyptologists active during this period. Soon after the war excavations resumed, providing new and unexpected finds and insights: in 1952 Ahmed Fakhry found the statue-cult temple at the Bent Pyramid, and in the 1960s Jean Leclant and his associates began explorations at the pyra­mids in South Saqqara. However, the pace of Old King­dom research both in the field and at scholars' desks accelerated notably during the 1980s and 1990s. Recent accomplishments in the field are due to the very effective activity of the Supreme Council of Antiquities, most recently represented by the excavations of Zahi Hawass; the work of Mark Lehner of the Harvard University Semitic Museum and the University of Chicago, carried out in the Old Kingdom industrial quarters at Giza; the French Archaeological Mission's continuing excavations at South Saqqara; and the efforts of the French Institute of Near Eastern Archaeology in the Dakhla Oasis, of the Czech Mission at Abusir, and of the German Archaeo­logical Institute at Dahshur. Also notable have been the collaboration of the University of Geneva and the Supreme Council of Antiquities at Abu Rawash and the Louvre's excavations around the tomb of Akhet-hotep at Saqqara under Christiane Ziegler. At the same time, the excava­tion and publication of tombs of Old Kingdom officials have proceeded apace, vastly enriching the documented corpus of relief decoration available for study. Key in this context are the Giza Mastabas series of the Museum of Fine Arts, Boston, edited and written in part by William Kelly Simpson, with volumes by Ann Macy Roth and Kent Weeks and forthcoming installments by Edward Brovarski and Peter Der Manuelian; the many publications of Naguib Kanawati of Macquarie University, Sydney, and his colleagues, which include tombs at provincial sites; and the German Archaeological Institute's volumes by Hartwig Altenmiiller, Ahmed Moussa, and others. No wonder that all this newly discovered and docu­mented material has inspired scholars to rethink hitherto unquestioned concepts.

William Stevenson Smith's History of Egyptian Sculp­ture and Painting in the Old Kingdom of 1946 so author­itatively presented the finds and researches of the archaeologists who worked during the first century of modern Egyptological exploration that more than a gen­eration passed before scholars challenged some of the views set forward in the book. After some years, how­ever, reevaluation did begin in the realm of intensive iconographical studies, such as Henry George Fischer's many works and Yvonne Harpur's study of decoration in Old Kingdom tombs, and, above all, in the field of dat­ing. Here Marianne Eaton-Krauss, Edna R. Russmann, Biri Fay, and Hourig Sourouzian have made significant contributions, and Cherpion's work has been decisive. The state of Old Kingdom research that resulted from these reassessments was aptly summarized by Rainer Stadelmann in his foreword to the published papers read at the first international conference on the art and cul­ture of the Old Kingdom, held at the German Archaeo­logical Institute in Cairo in 1991: "Several recently published studies with revolutionary proposals of new dates for outstanding works of both royal and nonroyal art have created a lively discussion among scholars con­cerned with the art history of the Old Kingdom." As Stadelmann noted, a symposium concerning the dating of Old Kingdom works seemed desirable to the partici­pants. Thus the first conference was followed by a sec­ond in 1994, sponsored by the French Institute of Near Eastern Archaeology in Cairo, and this meeting was suceeded by a third, at the Louvre in 1998. The papers read at all three conferences have now been published, adding immensely to the general knowledge of the subject.

The curators of "Egyptian Art in the Age of the Pyra­mids" are presenting to a wider public some of the results of this recent scholarly work. The wider audience may well ask why changes in the dating of Old Kingdom works of art are important. The answer is that these changes affect a fundamental aspect of Old Kingdom cul­ture and art: the relationship between the royal and the nonroyal spheres. To be sure, few works created for the pyramid precincts and solar temples of Old Kingdom rulers have been touched by the recent changes in dating, for royal statuary, reliefs, and minor arts either were found inside the pharaonic building complexes or are inscribed with the names of rulers, so that their attributions are fairly secure. The new datings primarily involve material from the tombs of Old Kingdom officials and their families, and each transfer of an official's statue, relief, or painting from one dynasty or reign to another changes the relationship of that work to the royal art that is now seen to be contemporary with it. For example, Renate Krauspe's redating to the Fourth Dynasty of the statue of Iai-ib and his wife, Khuaut (cat. no. 83), which Junker, its excavator, placed in the Sixth Dynasty, brings this astonishingly lively piece into close connection with the dyad of King Menkaure and a queen (cat. no. 67), thus opening up new insights into the manner in whichOld Kingdom artists were influenced by royal works. In the nonroyal pair the representational character of the Menkaure dyad evidently was transformed into an intimate depiction of the relationship between a man and his wife.

Redating has had other important ramifications. Thus, when reattributions placed many nonroyal sculptures in the Fourth Dynasty, this period emerged as a time characterized by much greater artistic diversity than previously thought. Smith's History acquainted us with a handful of nonroyal statues (and a number of very fragmentary pieces) from the Fourth Dynasty, while the reader of this catalogue and visitor to the exhibition is presented with eleven works of widely varied styles and types now dated to this dynasty. It is true that not all of the new placements will necessarily withstand intense scrutiny. Some viewers may, for instance, find it difficult to reconcile the differences between the pair statue of Iai-ib and Khuaut and that of Memi and Sabu (cat. no. 84). And, indeed, one of the aims of this exhibition is to allow judgments to be made in such instances by juxtaposing problematic works in one gallery. However individual cases may be resolved, the fact remains that the great Fourth Dynasty, the period that produced the most imposing of all pyramids, as well as the statuary of Khafre and Menkaure, can no longer be regarded as the monolithic artistic phase once envisaged.

While reattributions remove some important works from the orbits of the Fifth and Sixth Dynasties, the new dating scheme makes the artistic language of these periods more closely definable. Significant recent studies by Russmann and James F. Romano have defined a late Old Kingdom style, predominantly of the Sixth Dynasty, as the Second Style. The exhibition does not deal with this style in detail, but the works of this type that are included demonstrate the existence of an artistic language whose hallmarks are expressiveness and otherworldliness.

Ultimately, reading this catalogue and viewing the exhibition it accompanies should be a rewarding voyage through still widely uncharted lands. 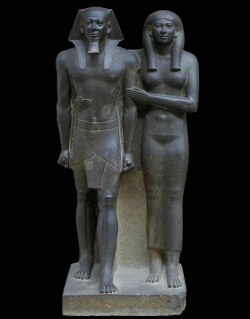