The nonroyal statuary of the Old Kingdom was not intended for public display. Destined for tombs, these "living images," as they were called by the ancient Egyptians, or images done "from life," were placed in offering chapels accessible to the priests who served there, shut away in a small concealed room called a serdab, or sometimes buried near the sarcophagus of the person for whom they were made. Texts in the cult chapels of the deceased explain that the statues were an integral part of the cult ceremony. Identified by the names and titles of the deceased, the statues received incense and nourishment. Before a funeral a priest performed a special rite called Opening of the Mouth[1] to bring the image magically to life. Their chief purpose was to receive offerings, in particular the nourishment[2] that would sustain the deceased in the afterlife.

They are thus not portraits in the modern sense of the term[3] but elevated and timeless images conforming to a canon, or set of rules, established in very ancient times. The limited range of poses, suppression of movement, and self-containment of the figures are doubtless attributable to their specific function.4 Many reveal an attempt to convey the physical characteristics of the individual. These works can be described as realistic without anachronism, for, unlike neighboring peoples, the Egyptians firmly believed that they would not sink into a sea of anonymous souls after death but would keep their identities intact.5 Although Egyptian artists paid particular attention to recording facial features, achieving a faithful likeness was not always essential. Other details contribute to the identification of the statue. There were perhaps fifty poses6 showing the deceased standing with left foot forward, sitting on the ground or on a seat, and—occasionally—kneeling; the person may be represented several times, in what is known as a pseudogroup, or in the company of various family members, or alone. This catalogue shows that individual statues of women are not numerous, and their tombs are few. Certain details of dress, such as the kilt, elaborate jewelry, and scepter, indicate the subject's prestige or— more rarely—his office, revealed, for example, by the wide sash of the ritual priest.7 Inscriptions—carved in relief on the walls and the false door of the chapel and written on funerary furniture and on the statue itself— enrich the architectural and religious setting.

Inscribed texts from the Old Kingdom are not long, including merely the name and principal titles of the person shown. Occasionally a dedication indicates that the statue was offered by a relative; for example, one of the statues of Sekhem-ka8 was dedicated by his son Ma-nefer. Less often the artist who sculpted the figure is alluded to (cat. no. 77). Texts might be placed on the base of the statue or on the subject's seat, generally on the front but sometimes on the sides. We do not know why the ample surface of the back pillar of nonroyal statues was not employed for this purpose during the period; at most, a short line of text may appear on its upper edge. It is almost unnecessary to say that the relationship between inscription and image is extremely close: the absence of any determinative at the end of a proper name suggests that the statue itself played that role.9

Only a limited number of royal statues survive from the Old Kingdom, whereas 948 statues of private persons have been recorded,10 and this figure does not include the many extant serving statuettes, which are not covered in this essay (see introduction to cat. nos. 136-143). Certain tombs contained no fewer than a hundred images!11 Fashioned from a rich selection of materials—wood, hippopotamus ivory, and stone—nonroyal statuary offers examples of work in almost every medium used by Egyptian sculptors beginning in the earliest dynasties.12 Only works in metal are absent, royal examples of which are known chiefly from written sources.13 As for wood, recent analytic studies of the Louvre collections14 show that acacia (Acacia sp., Mimosaceae family), a tree common in the Nile Valley, was the type most often used. The Egyptians also employed acacia, which was easy to carve and may have had symbolic importance in the cult of the goddess Hathor,15 for bas-reliefs and the false doors of mastabas. Jujube (Ziziphus sp., Rhamnaceae family) and ficus (Ficus sp., Moraceae family)16 were used for works whose style is characteristic of the Sixth Dynasty.17 Nothing testifies to the use of such exotic woods as ebony, although imported wood is mentioned in the tomb reliefs of Ra-shepses and Ti.18

Most nonroyal statues are carved in stone.19 Those dating from the inception of the Old Kingdom—from the Third Dynasty to the beginning of the Fourth—show a predilection for red granite from Aswan, as well as for the dark diorite that was also used sporadically throughout the Fifth Dynasty. No statue securely datable to the Sixth Dynasty seems to have been made of this material. Alabaster was also used (cat. nos. 26, 87) and, less frequently, anorthosite gneiss20 and Bekhen stone (graywacke).21 Crystalline sandstone (quartzite), whose dense texture is marvelously suited to the modeling of the human face, seems to have been reserved for works of exceptional quality.22 Limestone overwhelmingly predominates as the medium for nonroyal statuary, from the monumental figures of Sepa and Nesa (cat. nos. 11-13) to the delicate pair statue of the governor of Balat and his wife (figs 44, 45). Examination reveals that it was obtained from many locations: for the region around Cairo, from the Saqqara plateau, Helwan, and Tura; for the provinces, from oasis quarries, Middle Egypt, and Thebes. The richest tombs contained many statues; the number in the mastaba of Ptah-shepses, son-in-law of King Niuserre, has been estimated at almost twenty, and they were worked in stone of varying colors and textures, including alabaster, granite, and quartzite.23 However attractive the luster and polish of the material, the surface of these statues was at least partially covered with bright paints, and the garish effect conveyed was sometimes heightened by inlaid eyes.

Although most nonroyal statues are sculpted from limestone, the Egyptian artist did not take advantage of the properties of this soft stone. There is no openwork or drilled or punched detail, and no voids or effects of light and shade appear.24 Limestone was worked as if the sculptor had to obey the same constraints observed when granite was used. The Egyptian artist preserved the contours of the block of stone from which the human form emerged, delimiting the base of all statues, even those in wood, and the quadrangular seat on which the figure sat. The frontal view was primary, and the earliest statues indicate that a right-profile view that allowed both legs to be seen—the left extended in front of the right—was the most important (cat. nos. 11, 12). The artist of the Third Dynasty worked the back of a statue, but beginning in the Fourth Dynasty the back could be masked by a high slab (fig. 31),25 so any attack on the block was essentially made from the front.26 An essential feature of Egyptian stone statuary, the back pillar against which a statue rests is attested from the end of the Fourth Dynasty (cat. no. 91).

All the conventions of later Egyptian sculpture are present at the outset of the Old Kingdom. Glancing at the plates in this volume, the reader will sense the influence of the Egyptian canon, which manifests itself with seeming uniformity. There exists, in effect, an extraordinary degree of conceptual similarity between works made by different artists in highly diverse materials, owing to a shared system of rules applied in different contexts.27

The first principle in the canon is that of frontality,28 which translates into axial, symmetric organization.29 The articulated volumes of a subject's body represented in this way do not give a natural impression but rather the impression of a person completely still, with absolutely no tilting of shoulders or hips or overlapping of arms and legs. The stiffness that results is somewhat tempered by the advance of the left leg—hallmark of the characteristic pose of the standing male figure—and by asymmetries in the rendering of ears and eyes.30 Recent studies have shown that some figures twist slightly to their left.31 In groups represented according to the principle of frontality (cat. no. 83) the individuals are aligned in one plane and thereby isolated from one another. Only the gesture of an arm or clasped hands link the figures. At the close of the Old Kingdom, sculptors found a new solution, showing two persons at right angles to each other (cat. no. 172).32

Convention also determined the rendering of clothing. Beginning in the Third Dynasty the pleats of a man's kilt are represented by lines, and the decorative folds cover body parts without acknowledging their contours. With the exception of the clothing in one queen's statue,33 women's robes cling like an imperceptible sheath, hiding nothing of the shape beneath yet obscuring anatomical details, and thus expressing the body, according to Roland Tefnin, "in its dual essence, natural and cultural."34 Even the most fully realized sculptures, which can truly be called realistic, omit such details as skin folds, wrinkles, veins, and rippling tendons that convey the impression of real life and which the artists of the Archaic Period tended to overdo.35

Was this strict and invariable canon of conventions a characteristic expression of a principle of Egyptian thought,36 or should we see it, rather, as the conscious effort of an elite to define and sustain a particular world-view?37 Many interpretations have been advanced, but they all remain conjectural. Nevertheless, it is clear that at the very moment the Egyptians invented architecture in stone, they presented a coherent and perfected system for representing the human figure, executed with a flawless technique. This achievement especially elicits admiration in comparison to the accomplishments of contemporary cultures. The canon, whose formulas are probably the result of deliberate choice, would endure during the following millennia.

Nevertheless, in the sculpture of the Old Kingdom, which spans five centuries, a stylistic evolution is discernible, and it can be described—only provisionally, however, because dating the works is difficult. Although royal statuary defines the style of the period, comparing it with private statuary is not always useful. We must employ other dating criteria and begin with those statues whose owners can be assigned to a particular reign.38 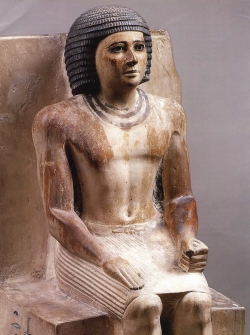 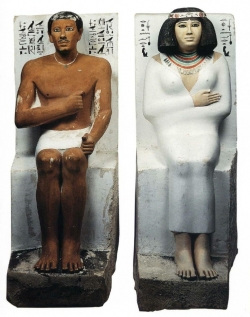 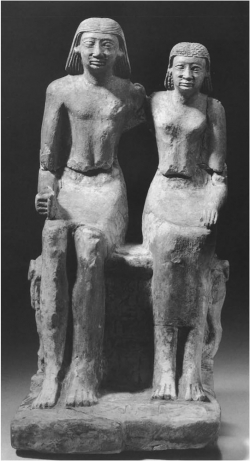 Fig. 44. Pair Statue of Ima-Pepi and His Wife Seated 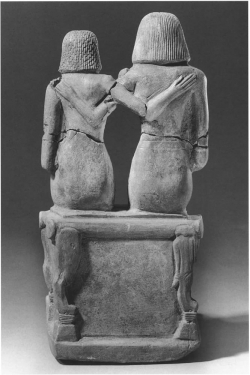 Fig. 45. Pair Statue of Ima-Pepi and His Wife Seated