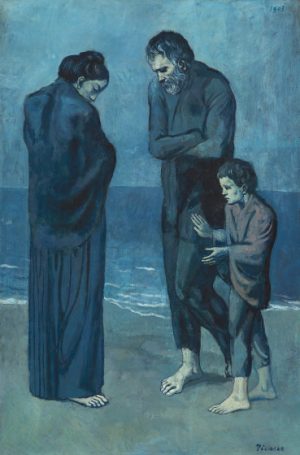 Pablo Picasso (1881-1973) often left visual clues on the surfaces of his paintings to suggest a hidden image underneath, as on The Tragedy of 1903. Artists frequently make changes to a painting or reuse a canvas or panel with an image already painted on it. Often the supports are reworked because an artist cannot afford to purchase new materials.

An artist also may scrape off an earlier painting and start again or occasionally cover an abandoned image with a uniform coat of ground. Picasso did this very rarely. When he reworked his paintings, he most often did so directly over earlier images, neither using a "clean" side nor obliterating the abandoned attempt. Early in his career, financial constraints were certainly part of his motivation for reusing supports, but Picasso reworked paintings throughout his lifetime. His reworking was not done because he was frugal, but for Picasso the initial subject, the shape or form on the canvas, often revealed itself in a different guise as he worked on or returned to a picture, and it served as a new inspiration.