On Thursday, Ringling Brothers and Barnum & Bailey Circus announced that its 13 traveling elephant performers would retire by 2018, ending a storied tradition for the Greatest Show on Earth.

The animals will leave the spotlight and head to the circus’s 200-acre conservation center in Florida. And who can begrudge the majestic creatures a sunny retirement? But I will admit to a bittersweet feeling that this particular part of the show won’t go on. It’s not just the end of a circus staple. For more than 200 years, the circus elephant has delighted and awed American audiences. And in its stately, lumbering way, it has been a lens for how the country sees itself.

Elephant performers have also generated a fair amount of controversy along the way. For decades, critics have argued that elephants, highly intelligent, socially sensitive animals, have no place in captivity. Animal rights groups have long battled circuses for their use of the prod-like metal ankus, or bullhook, as a training device, and some cities have even explicitly banned it. 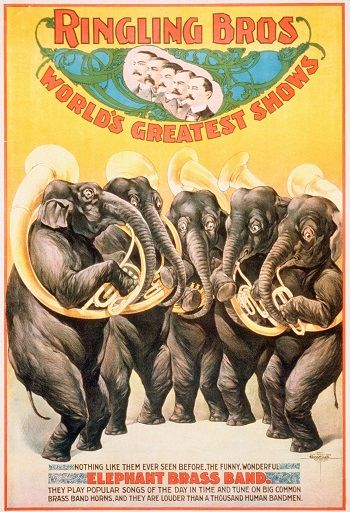 “There’s been somewhat of a mood shift among our consumers,” Alana Feld, executive vice president for Feld Entertainment, the circus’s parent company, said of the company’s decision. “A lot of people aren’t comfortable with us touring with our elephants.”

She’s right, it seems, but her statement also marks a stunning reversal. Elephants have been wildly popular in this country since 1796, when the first one arrived on American soil. Jacob Crowninshield, a ship’s captain from Salem, Mass., landed in New York City with a two-year-old Asian female from Calcutta. He sold the “Crowninshield Elephant” to an enterprising showman for $10,000. Thousands of eager Americans, including President John Adams, flocked to see the animal in taverns and courtyards, where audiences, fascinated by her trunk’s dexterity, plied her with gingerbread and wine. She and her keeper plodded from Rhode Island to New Orleans under cover of darkness for the next nine years because her owner was fearful of giving spectators a “free” look.

Americans at the time were particularly receptive to the Crowninshield Elephant and the many others who followed her, in part, because of nationalistic myth: Thomas Jefferson believed that flesh-eating elephantine mammoths roamed the American West, and he expressly ordered Lewis and Clark to look for one on their trans-Mississippi expedition. Performing elephants gave live, physical form to Jefferson’s notion of the American mammoth.

The sensational popularity of the Crowninshield Elephant led the way for others. The first elephant appeared in an American circus at the turn of the 19th century, and by the 1870s, impresarios defined their shows’ worth by the number of elephants they had. In response to decades of evangelical censure for displaying scantily clad human performers, circus owners pointed to their popular elephants as proof of their broader mission to educate and entertain.

In 1882, P. T. Barnum purchased Jumbo, a roughly six-ton African elephant who stood 12 feet tall. Huge crowds swarmed Jumbo’s arrival from London in New York City on Easter Sunday of that year, kicking off “Jumbomania.” Unfortunately, Jumbo was killed by a train in 1885, but his corpse lived on: Barnum profitably exhibited the animal’s enormous hide and skeleton.

Jumbo’s popularity reflected the prominent place of the circus in American culture at that time. In an age before electronic media, the circus offered Americans an intimate sense of the wider world right at home. Traveling coast to coast by railroad, the largest shows employed an international cast of more than a thousand people and hundreds of animals. On “Circus Day,” local factories closed and schools canceled classes.

Audiences also flocked to see the elephant because circuses could be thrillingly dangerous. Rain, wind, lightning, mud, accidents and fights wrecked a show’s militarylike precision. And, although rare, a few elephants, in circus parlance, infamously “went bad,” rampaging through town and stomping audiences and keepers alike. In 1903, Topsy, a former circus elephant, was electrocuted at Coney Island, the death captured on film. Contemporary animal rights activists point to this troubling history as yet another reason elephants should leave the circus.

Instances of abuse are an undeniable part of the historical record. But many modern circus elephants have lived long, fruitful lives, forming deep bonds with trainers such as Bill “Buckles” Woodcock and the late John Herriott, who rose to fame in their own right. These relationships mirror the fact that Asian elephants have toiled alongside human beings for thousands of years. Animal labor remains a reality of human experience, even in a motorized world. If we lose this relationship, we lose a vital part of circus history, as well as a direct emotional tie to these magnificent animals. No matter the reasonable case behind the decision, it is a real loss.

The last time I saw the Ringling Brothers elephants was two years ago, at a circus conference in Tampa, where eight members of the performing herd were showing off in a makeshift yard in an arena parking lot.

This was a preshow treat: seeing the elephants up close. Hundreds of children, and their watchful parents, joyfully swarmed the enclosure as the elephants ate hay and gave one another cloudlike dust baths with their trunks amid the mounds of white sand. The kids were squealing and wide-eyed, pushing forward for a better view, participating in the long American tradition of seeing the elephant.

Janet M. Davis is a professor of American studies at the University of Texas at Austin, and the author of The Circus Age: Culture and Society Under the American Big Top.