On my second visit to Chibok, I slept with a machete tucked between the headboard of the bed and the dresser, wondering if the reddish stains on the blade were rust or blood.

Across the hallway, I saw a wooden door with shredded panels. When I asked my friend about it, he said that some Boko Haram members had clawed through that door a few months ago in an attempt to attack the homeowner, a friend of his. My friend, a Chibok native and also a vigilante fighter against the Islamist militants, said that the owner no longer slept there. But he told me to make myself comfortable.

Sleeping across from that tattered door, I knew that I had once again come close to Boko Haram.

I had returned to Chibok, curious to see how the March presidential elections would go down in this town, which has become a symbol of Boko Haram’s disturbing penchant for abducting girls. Chibok, in Nigeria’s north-eastern Borno region, became world-famous in April 2014 when Boko Haram fighters abducted 276 female students from the local high school. More than 200 are still missing. 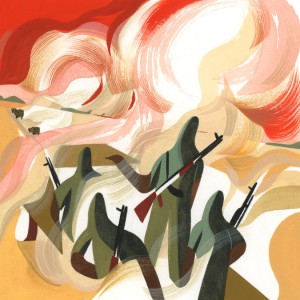 As I walked around Chibok on Election Day, most people told me they had voted for the former army general Muhammadu Buhari, banking on his promise to fight Boko Haram. Chibok residents were disillusioned with the ineffectual response to the security crisis of the incumbent president, Goodluck Jonathan.

The first time I visited Chibok, a few weeks after the mass abduction, I saw no soldiers. This time, Chibok was better protected.

The soldiers stationed there allowed me and my friend to leave on the Sunday after Election Day. I was headed back to Abuja, but we were traveling with some government officials who needed to drop off Chibok’s ballot boxes at a nearby town called Biu, and we planned to stop there, too.

As we left, the sky grew suddenly dark. My friend turned off the headlights. “We don’t want to attract them,” he said.

He drove at a crawl, maneuvering over the bumps in the dirt road. On either side was nothing but untouched wilderness.

Finally, we reached Damboa, a city about 20 miles north of Chibok that had once been a haven for Boko Haram recruitment. Soldiers there told us there was no way we could proceed: The road ahead was just too dangerous, they said. Just hours earlier, they’d exchanged fire with a group of Boko Haram fighters and dismantled a checkpoint the militants had set up.

So we slept in the car on the side of the road in Damboa. When I awoke, the light of dawn revealed a marketplace where the stalls were charred and melted car parts lay about. My friend said it had recently been attacked.

We took off at 7 a.m., thanking the soldiers for keeping watch over us. The sky was bright and clear. Beside our two vehicles, there were no other cars on the road.

Thirty minutes out of Damboa, we were driving through an abandoned village called Kuboa, a known waypoint for Boko Haram fighters moving to and from their camps in a nearby forest.

In Kuboa, I saw a corpse. The color of the man’s shirt was indistinguishable from the blood spilled from his body.

My gaze was still on him when I heard the first explosion. Instinctively, I shrank down in the seat, tucking my knees beneath the glove compartment and stifling any noise. I knew that calmness was the key.

I looked over at my friend, watching his fingers curl tighter around the steering wheel, eyebrows gather and lips purse. His hunting rifle rested by his knee. We both understood that stopping the car to use the rifle could be fatal.

Three Boko Haram fighters in mufti, with black-and-white cloth tied around their heads, stood in the road on my side, carrying AK-47s. Two more, clad in camouflage, bearing rocket-propelled grenade launchers, were on my friend’s side. Behind them were acres upon acres of rolling grassland.

Bullets rattled against the side of the car. The smell of gunpowder and pops from rifles collided with my senses. My friend floored the gas pedal. The car was racing almost as fast as my heartbeat. I guessed they were aiming at the tires.

We lost sight of our four companions, the officials driving behind us. We kept speeding until we were out of earshot of the gunfire.

Our companions caught up. Their car had a cracked windshield, bullet holes everywhere, and one side looked almost ripped off by a hit from a rocket-propelled grenade. Miraculously, none of them were injured. When we reached a checkpoint, we reported the incident to the soldiers.

We had encountered the hit-and-run militants who villagers said use magic charms to disappear into the air. Young women who had lived in forced captivity with Boko Haram told me that they acted like men “not from this world.” In interviews I’ve conducted, victims described Boko Haram as “demonic” or “ghosts.”

Reporting on Boko Haram over the years had brought me close, but never as close as that day — not even in the town of Buni Yadi, where Boko Haram had slaughtered dozens of boys at a high school last year. Bloodied strips of school uniforms dangled on glass shards still attached to the burned-out window frames.

To many, the faces of Boko Haram are still a mystery, hidden behind an impenetrable religious austerity and desperation. But the people in the northeast hope that this new president has the political will to tackle the insurgency.

“Boko Haram is a mindless, godless group who are as far away from Islam as one can think of,” Mr. Buhari said during his May inauguration.

His own identity as a Muslim from northern Nigeria gives him authority on the issue. But this military man, who no longer wants to be referred to as “general,” also knows that it’s his military experience that many Nigerians hope will help him defeat Boko Haram, once and for all.

But Mr. Buhari faces another challenge: Nigeria’s divided reality. Those who live in southern Nigeria have little idea of the brutal forces ripping through communities like Damboa, Kubwa and Chibok. I’ve even heard whispers that the insurgency is a hoax.

The scope of the violence seems too great for them to comprehend. When I talk to people in the south, I sometimes hear a sense of invincibility, a notion that Boko Haram is not a real threat because it could never penetrate into southern Nigeria.

Mr. Buhari, at least, knows the danger and means to stop it. Those of us who have seen Boko Haram up close hope he succeeds.

Chika Oduah is a writer and journalist.