In August, Iraq’s Kurds faced their most serious threat since the Baath Party’s massacres and genocide of the 1980s. The Islamic State came within 30 kilometers of Erbil, the bustling capital of the Kurdistan region.

The jihadist offensive forced the once-feared Kurdish fighters, known as pesh merga, to withdraw from the town of Sinjar, in northern Iraq. Up to 300,000 residents fled and tens of thousands were stranded on Mount Sinjar, leading to a humanitarian crisis and the threat of a genocide. It was only through American airstrikes that the Islamic State’s gains, which many Kurds believed involved the very survival of Kurdistan, were reversed.

Since then, the Kurds have proved a useful partner in the war against the Islamic State. But the Kurds’ security is in jeopardy again — this time because of internal divisions. The historic rivalry between the region’s two ruling parties, the Patriotic Union of Kurdistan, or P.U.K., and the Kurdistan Democratic Party, or K.D.P., has revived since August. 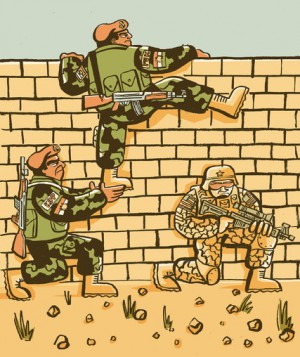 The P.U.K. started as a split from the K.D.P. in the 1970s. The two factions fought for power in a bloody civil war in the ’90s that was known in Kurdish as “brakuji,” or the killing of brothers. Formed as a reaction to the K.D.P.'s nepotism and tribalism, the P.U.K. itself fell victim to the same dynamics and suffered a decline, particularly over the past decade. Matters were not helped by the ailing health of its co-founder, Jalal Talabani, the former president of Iraq who had also been a unifying and stabilizing force in the Kurdish region.

The fall of Sinjar to the Islamic State changed the situation. It was pesh merga units affiliated with the K.D.P. who were forced to withdraw. Seeing this as an opportunity to reverse its decline, the P.U.K. capitalized on the retreat by calling it a capitulation and pointing out that P.U.K.-aligned forces had suffered no such defeats.

Most Kurds in the region have adopted this perspective. The P.U.K. succeeded in undermining the narrative that the K.D.P. ran the more effective organization.

Then followed the siege of the town of Kobani, close to the Turkish border in Syrian Kurdistan. Once again, the P.U.K. saw a chance to seize the initiative, by suggesting that it, rather than the Kurdistan regional government or the K.D.P., was providing weapons and supplies to the Syrian Kurdish fighters, who belong to a party that has historically been at odds with the K.D.P.

These events dramatically raised tensions between the two Iraqi Kurdish parties. Although K.D.P. officials hold key positions in the regional government of Iraqi Kurdistan, including the posts of both prime minister and president, the pesh merga forces of each party have operational autonomy. Despite more than two decades of self-rule and nation-building, there is no unified military command.

The fact that pesh merga units often act according to political objectives determined by party cliques is clearly a danger to the security of the region. As a senior official in Erbil told me last month, “We talk about independence, but talk counts for little when our pesh merga are more loyal to party than nation.”

The two parties have actually come a long way since the worst days of their internecine conflict. After 2003, they completed a reconciliation that had begun earlier with American support, and both secured their legitimacy by participating in elections that were seen as largely free and fair. The two parties, along with an opposition group named Gorran (itself a splinter of the P.U.K.), belong to a coalition government in the Kurdistan region.

As the advance of the Islamic State has shown, this accord no longer goes far enough. The Kurds must unify militarily if they are to contain the jihadist threat and secure their region from the kind of terrorist atrocity that Erbil witnessed just over three weeks ago, when suicide bombers struck the governor’s office and killed at least six people. A unified security force would be far more effective in fighting the Islamic State’s battle-hardened units. If pesh merga forces in Sinjar had been operating under central authority, they might in fact have held the town.

The Islamic State also proved that the Kurds remain heavily dependent on international support. This reliance is not sustainable. Once the immediate threat from the Islamic State has passed, long-term support from the international community is not realistic. The recent rush of aid does not signal a major shift in Western foreign policy toward Kurdistan.

The political reconciliation that has taken place is just one element of unification, and a relatively fragile and reversible one. To ensure that the Kurds never again fall into civil strife, the two main parties must reform the structure of the military command.

The pesh merga can no longer be a security force with divided loyalties. Both on the battlefield and behind the lines, the pesh merga must evolve into a professional army that is answerable to the regional government and its Parliament, rather than partisan elites.

The United States and the international community need to support the Kurds in this process. Erbil is already a regional center for diplomacy and business, but there must be a more engaged, less laissez-faire approach on the ground from the Kurdistan region’s international allies. It is in their interests, too, to see a transformation of Kurdistan’s armed forces into a more effective partner in the fight against the Islamic State. A centralized, professionalized pesh merga would also be a model for the region’s other Kurds who are fighting the jihadists, like the Syrian Kurdish forces around Kobani.

A unified military would help prevent the two parties from entrenching themselves in unyielding positions, and so reduce the risk of renewed hostilities. The lack of military unity has also undermined the judiciary, the independence of the media and the political process. Reforming the pesh merga command will strengthen the rule of law in the region more generally.

In the end, unity alone can truly insulate the region from the threat from the Islamic State. Without it, it is much harder to imagine the Kurds’ achieving the statehood that most, if not all, want.

Ranj Alaaldin is a doctoral candidate at the London School of Economics and a visiting scholar at Columbia University.