In 2014, the U.S. State Department Arms Control Compliance Report stated: “Iran currently is in violation of obligations under [the Nuclear non-Proliferation Treaty], its [United Nations International Atomic Energy Agency] Safeguards Agreement, and relevant U.N. Security Council resolutions .” Question: Why are we negotiating for a new agreement, when existing Iranian Nuclear Nonproliferation Treaty (NPT) violations persist unresolved, suggesting that Iran is busily producing nuclear weapons and is unlikely to comply with any new agreement? Historically, such negotiation is unprecedented.

Alarmingly, Iran is within three months of having nuclear warheads, according to the negotiators, and is therefore about to become another nuclear-armed North Korea. North Korea also cheated on the Nuclear Nonproliferation Treaty, and developed its own nukes and ballistic missiles. In fact, there is an alliance — Iran co-finances North Korea’s nuclear tests, North Korea has already staged nuclear tests for Iran, and Iranian missile telemetry is derived from North Korean telemetry. So Iran has long been collaborating with a notorious rogue and cheater.

Any international agreement trying to delay Iran’s imminent capability needs to acknowledge that the NPT negotiations with North Korea failed because that nation has long spurned any arms control obligations. Like North Korea, Iran is engaged in nuclear blackmail — cheating to break out of international constraints. Moreover, the end of sanctions against Iran will surely increase its ability to covertly acquire nuclear weapons. 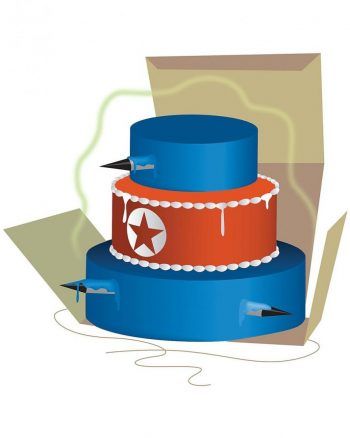 Iran has been party to the 1968 Nuclear Nonproliferation Treaty since 1970, but has long been violating this treaty. In April 2010, President Obama himself accused Iran of violating the NPT, and added “we will not tolerate actions that flout the NPT, risk an arms race in a vital region, and threaten the credibility of the international community and our collective security … .”

The most dangerous threat from Iran is a small nuclear suitcase bomb supplied to Hezbollah, Hamas or al Qaeda terrorists, which can only be deterred by effective and active intelligence operations. Will the most directly threatened Israelis, who have Iranian generals commanding terrorists around their borders, succeed in preventing a nuclear terrorist attack? Iran could have such a bomb within three months. It may even secretly have it now.

Alternatively, the Iranians could use a ballistic missile to detonate a nuclear warhead in space that uses an electromagnetic pulse to totally disrupt the electric power grids of Israel, Europe or the United States. This is an equally dangerous threat.

Analysis of some details of the new framework agreement is instructive. First, the very existence of Iranian ballistic missile programs indicates the intention to build nuclear warheads. Ballistic missiles are too expensive to develop, test and produce without warheads that are weapons of mass destruction. With help from the North Koreans, Pakistanis’ A.Q. Khan network, Russians and Chinese, the Iranians are developing long-range ballistic missiles. The United States implicitly recognizes this intention by continuing to oppose and penalize through ongoing sanctions Iranian development of ballistic missiles and terrorism.

Second, Iran has accused the Obama administration of lying about the substantive content of the “agreement.”

Third, the “final” agreement is due by June 30. The Obama administration may seek to evade congressional approval of the agreement because its substantive content is so bad that there is little possibility of approval. The ultimate form, signatories and ratification procedures of the new agreement are unresolved. There will be a severe constitutional and sovereignty issues if the agreement is not voted on in Congress, but instead is submitted only to the United Nations. The White House has threatened to veto any congressional actions on this agreement.

Fourth, it is possible that the Iranians already have acquired a small number of low-yield nuclear weapons from North Korea or have stored them there.

Fifth, economic sanctions are being used as current leverage, but how will they be reimposed once lifted? And once billions of euros and dollars have been spent, and how will sanctions “snap back”?

Sixth, the proposed signatories include Russia and China, but Russia is a confirmed arms control cheater (still accused by the United States of unresolved violations of the Biological Weapons Convention and Intermediate-Range Nuclear Forces Treaty), and China hides most of its strategic forces and nuclear weapons. After the chemical weapons controversy in Syria, whose supposed destruction of its chemical weapons was “verified” by Russia, this new agreement could be another case of cheaters verifying cheaters. China and Russia, as well as North Korea and Pakistan, actually helped Iranian nuclear and missile development efforts.

The history of negotiating, implementing and verifying arms control treaties with the Soviet Union and Russia was difficult enough. From 1970 through the 1990s, Soviet leaders cheated, and then after many years they publicly admitted to some key violations. Negotiating with Iran — “World Terrorism Central” — may be harder, because Iran considers the United States the “Great Satan.” The Iran-North Korea cooperation alliance could easily be a channel for covert Iranian circumvention or violation. North Korea is the only country in the entire world outside the Nuclear Nonproliferation Treaty.

In sum, the stakes are very high for verification, and any agreement must include constraints on the covert Iranian channel to North Korea.