Two options for dealing with climate change — reducing greenhouse gas emissions through a global agreement, and geoengineering proposals such as injecting sulfur into the stratosphere — tend to dominate current thinking. But there is a “third way” that is almost entirely neglected in political negotiations and public debate. It involves capturing carbon dioxide from the atmosphere and storing it or using it to create things we need. Because of the scale of the climate problem, I believe that in coming decades third-way technologies will become a major focus of activity.

Human emissions of greenhouse gases have grown so swiftly over the past decade that they’re following the worst case scenario of the Intergovernmental Panel on Climate Change. In round numbers, humanity is now emitting more than 10 gigatons of carbon (in the form of 40 gigatons of CO2) annually. The atmospheric CO2 concentration is nearing 400 parts per million, its highest level in millions of years. Because CO2 lasts so long in the atmosphere, even if no more were emitted, the existing gas would cause temperatures to rise by a further 0.5 degrees Celsius (to about 1.5 degrees above the preindustrial average).

Sadly, emissions will not stop instantly. Instead, the national pledges being made in advance of the international climate change conference in Paris at the end of this year suggest that not enough will be done to prevent global temperatures from rising beyond the goal of 2 degrees Celsius. 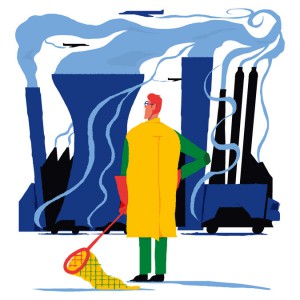 As the years go by, it will become highly desirable to remove some of that CO2. But it turns out that removing a gigaton of carbon from the atmosphere can be a task of planetary proportions.

For example, planting enough trees to capture a single gigaton of atmospheric carbon would involve establishing forests over an area the size of America’s contiguous 48 states at a rate sufficient to cover New York state every year over a 50-year period. Moreover, tree planting on that scale is likely to alter Earth’s albedo, making the planet darker and so heating it up.

Thankfully there are other means of drawing down atmospheric carbon. All fall into two categories: those that use the photosynthetic ability of plants to capture CO2, and those that use chemical methods. Using plants has the advantage that the primary energy source (the Sun) is free, but as the tree-planting example illustrates, their use is limited by the biosphere and the many demands humans already place on it. The chemical methods all require energy, often derived at present from the burning of fossil fuels (though hopefully increasingly through green energy), but they have the advantage of great capacity.

One biological approach involves converting plant matter into biochar, a process that yields valuable chemicals and fuels at the same time that much of the carbon content is stabilized for storage. At present, less than 1,000 tons of biochar is produced globally each year, so the industry would need to grow massively to make a meaningful contribution.

Opportunities for biological capture also exist offshore. Kelp grows fast, and sequesters lots of CO2. One study suggests that covering 9 percent of the oceans with seaweed farms would capture the equivalent of all of humanity’s current carbon emissions. Despite the fact that China already has more than 500 square kilometers of kelp farms, there is no proof that this is possible. And just where all of that captured carbon might be stored remains a problem.

Chemical methods of capturing CO2 are spectacularly varied — from direct air capture using resins, to the use of crushed olivine (a mineral that absorbs CO2 as it weathers) to seed beaches, to new forms of carbon-negative cement-making. If all the world’s cement were sourced from new carbon-neutral production methods for making concrete that can capture CO2 from the air, around a gigaton of carbon could be captured per year. Some cutting edge technologies even have the potential to transform CO2 into plastics or hydrocarbons.

One issue facing many third-way technologies is where to put the stupendous volumes of carbon or CO2 they would capture. This has led to a new look at geological storage. It turns out that the ocean crust three kilometers or more below the sea is a far better prospect for CO2 sequestration than is the land, because the pressure exerted by the overlying water helps compress the gas, keeping it stable. It’s even been suggested that giant chiller boxes be built over the Antarctic ice cap to lower the air temperature by around 30 degrees; that would cause the CO2 to fall out of the air as dry ice, which could then be buried in the ice cap.

At present, all of these approaches are in the very early stages of development, and none are anywhere near capable of drawing a gigaton of carbon out of the atmosphere. Costs remain high and can average $100 per ton of carbon sequestered for some approaches. This incidentally offers a good benchmark for a global carbon price: If it costs $100 to remediate a ton of carbon emitted, then surely the polluter should pay an equivalent amount to emit it. But just as costs have come down as investments have been made in wind and solar, so the costs of third-way technologies can be expected to fall over time.

It is critical that the main focus of the Paris meeting remain on reducing the burning of fossil fuels. There is therefore a moral hazard in urging action on the third way. But knowing how long it takes to get new technologies to scale, and how soon we are likely to need them, there is also a moral hazard in ignoring the urgent need for immediate investment.

If the appropriate investments are made, it’s a reasonable assumption that the third way could be drawing four gigatons of carbon out of the air each year — that’s 40 percent of current emissions — by 2050. And 4 gigatons is close to the 5 gigatons of carbon required to be taken from the atmosphere to reduce the concentration of CO2 by 1 part per million. That would leave just 119 parts to go before we reach preindustrial levels.

Tim Flannery is the author, most recently, of the forthcoming book Atmosphere of Hope: Searching for Solutions to the Climate Crisis.