Late last month, Cosimo Borraccino, a left-wing member of the regional council for Apulia, in southern Italy, proposed passing a local law to require the enforcement of national legislation granting women access to abortion. His opponents on the council, mostly from center-right parties, said the bill was unnecessary and that Mr. Borraccino was “slamming into a wall of self-evidence.”

They can do that because the very law that legalized abortion nearly 40 years ago also exempts medical personnel from providing the procedure if “they have a conscientious objection, declared in advance.” More and more conscientious objectors — many of them Catholic — have joined gynecological wards, women’s clinics and pharmacies since, and as a result getting an abortion in Italy today can be as hard as in countries where abortions are illegal.

Some 20,000 unsafe and illegal abortions are said to be performed in Italy every year, compared with about 100,000 legal ones. The number of illegal procedures is increasing, advocates for women’s rights say, even as the number of legal ones is decreasing. According to 2015 figures from the health ministry, the most recent available, less than 60 percent of public hospitals in Italy even provided abortions. Earlier this year, one woman in Padua, a city in the northeast, had to go to 23 hospitals before she found one that would terminate her pregnancy. 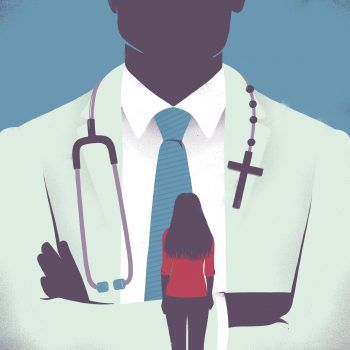 For this, Italy has been repeatedly chastised by the Council of Europe and the United Nations Human Rights Committee. The government has responded demurely, at times claiming that the number of medical personnel who are not conscientious objectors has remained steady for 30 years.

Yet, according to official figures, the share of conscientious objectors among gynecologists rose from 59 percent in 2005 to 70 percent in 2013. (The government has stopped releasing the data in recent years.) And Noemi di Iorio, an activist with the women’s collective La Mala Educación, told me during a women’s rights rally in Bologna on Sept. 28 — International Safe Abortion Day — that “the presence of religious conscientious objectors in women’s health clinics has reached a peak.”

A pitched battle certainly now seems to be underway — in hospitals and on the streets, in local assemblies and courts throughout the country.

Early this year, a major public hospital in Rome listed two job openings for gynecologists, specifying that it was seeking candidates who were not conscientious objectors. The Italian Bishops’ Conference denounced the ad as discriminatory, but a local court said it was legal. In August, an administrative court in Rome ruled that medical personnel could not invoke conscientious objection to refuse prescribing birth-control pills or withhold certificates of pregnancy, which women seeking an abortion need. Local media called the decision a “revolution.”

Almost as soon as Law 194 was passed in 1978, the Church and its political proxy then, the Christian Democratic Party, tried to have it repealed. A referendum was held in 1981, but voters rejected the idea — roundly, by a margin of 2 to 1. Having failed to change the law, the Church then set out to exploit its internal contradictions — which it had helped créate.

Even as Law 194 guarantees the right to an abortion, it “recognizes the social value of motherhood.” According to Angela Balzano, a researcher in philosophy and bioethics at the University of Bologna, that built-in tension, along with “the loophole provided by the clause on conscientious objection,” was an attempt to mediate between “two irreconcilable positions” in the late 1970s: the abortion-rights agenda of the Radical Party, a leading left-wing party, and the anti-abortion Catholics. She called this “a clear case of judicial antinomy.”

Four decades later, it’s apparent who has benefited from that weakness, and this result is no accident. Pope Francis himself, speaking at a gathering of Italian Catholic physicians in 2014, encouraged doctors to make “brave choices that go against the current,” referring pointedly to conscientious objection and abortion.

Although the Christian Democrats are no longer, Catholicism remains a major political force. The religious movement Comunione e Liberazione (Communion and Liberation), whose stated mission is to promote the “education to the Christian faith” and comes under the pope’s direct authority, has thousands of supporters — some say many thousands — including in hospitals, universities and women’s clinics, and among politicians in center-right parties, like those who opposed Mr. Borraccino’s law in Apulia.

In addition to legalizing abortion, Law 194 called for establishing specialized women’s clinics. But after years of cuts to the state health care system, many clinics today are Catholic, and those refuse to provide even information or basic services to women seeking an abortion. What’s more, they are partly funded with taxpayer money: 0.8 percent of personal taxes are directly allocated to the Church, unless taxpayers specifically ask to opt out. So much for the separation of Church and state.

The law granting women access to abortion has been gutted, Assunta Sarlo, a journalist and activist with the feminist group Usciamo dal Silenzio (Let’s End the Silence), told me, partly “because the religious forces have been able to count on political allies in what remains a strongly Catholic country.” But it’s also, she said, “because the reputation of abortion is such that choosing to be a gynecologist who carries out this type of procedure is akin to career suicide.”

Opinion polls suggest that the vast majority of Italians still support access to abortion. But some three-quarters of the population also call themselves Catholic, and so even for some Italians who support women’s right to terminate a pregnancy, abortion still carries a stigma. And that’s just the kind of tension that the Church has been expert at exploiting — at a great cost to women, as well as the rule of law, in Italy.

Ilaria Maria Sala is an Italian journalist based in Hong Kong.