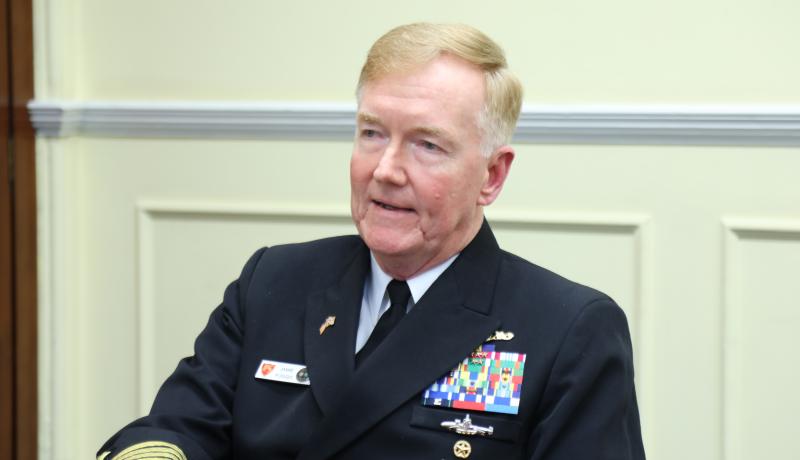 The commander of Allied Joint Force Command Naples and US Naval Forces Europe and Africa, James Foggo, speaks with Jason Naselli about how military intervention is changing and how NATO is preparing for future threats.

Are the days of large-scale Western military interventions over?

No I don’t think they are because we can’t predict with 100 per cent accuracy what the next threat will be, or work out where the next war will be. So what’s important, as [the NATO] alliance, is that we remain strong.

The motto that I grew up with in the alliance came from my time with Admiral [James] Stavridis [former supreme allied commander Europe]. He actually had a contest, and there was a young officer who provided him with the winner, which was ‘stronger together’. That remains to this day.

So, budgets have been rising as the result of threats. We see threats from Russia; we see what violent extremist organizations have done. We have shown an incredible interest in putting force in the areas where we have the threat: the Baltic region, eastern Europe – and we are now focusing south [of Europe] for obvious reasons. There are violent extremist organizations down there that have created instability. That instability tends to migrate to Europe.

The alliance has recognized that and the alliance is trying to help in a different way. Not a kinetic way, but as a facilitator, to help solve some of the problems in dealing with ungoverned spaces, the lack of rule of law and the presence of trafficking in all sorts of things. Narcotics, human trafficking, weapons trafficking – all facilitated by terrorists who tax these organizations and then use it against the rest of us in the West or in legitimate, sovereign African nations, who just want a better life for themselves and for their children.

You’ve described support that is ‘not kinetic’. Certainly one of the most notable differences we’ve seen in Western intervention is in Syria and Iraq, in the campaign against ISIS, which has been far more about supporting local proxy forces on the ground. Will future operations look more like this than the large deployments we’ve seen in the past?

In the upcoming months, you will see more than 35,000 personnel come ashore in Norway [for the Trident Juncture exercise]. There could be only one reason for an exercise of that magnitude, and that would be to send a very strong message to anybody who might want to interfere in the Baltic region or in Scandinavian nations who are members of the alliance. We’re going to show that we can get there lightning-fast with a preponderance of force that would overwhelm any nation that might take action against a NATO partner or ally.

On the intervention in Syria and Iraq: I watched with great concern as ISIS established a foothold – first, very publically in Mosul, and then in what looked like a potentially significant percentage of territory in Iraq – after many nations of the coalition spent their blood and treasure trying to give the Iraqis the right to self-determination. When ISIS attacked and started to move towards Baghdad and other areas, there was grave concern.

What we did differently this time was not to go back with large armies to fight ISIS, but to help the Iraqis help themselves. So there was a tremendous effort on the part of coalition forces to train the Iraqis, to rebuild the Iraqi army and put the Iraqi army in the fight. And I think it did a great job. ISIS is essentially crushed in Iraq and Syria. Now the concern is they’re going to pop up someplace else. That’s a smaller scale, but we all have to be concerned about it.

So we are ready to fight a big campaign if we need to; we’re going to demonstrate that in Trident Juncture. At the same time, we’ve learned the lessons from the Iraq War. In going back in, we did not do that with hundreds of thousands of troops. We had a smaller footprint and helped the Iraqis – and it took a while. It took about a year before they started to move on those cities and liberate those cities, but they’ve been very successful. And I think that’s a new model for intervention in the future.

So we’ve got to be ready for any contingency. We have to be able to fight a large-scale war; we have to get there quickly. At the same time, we have to maintain regional stability and try to prevent things from happening on the ground that might impact NATO partners or allies, that could lead to a regional crisis or a small war.

Is this new strategy as used against ISIS solely driven by strategic concerns? Certainly some of it seems to be driven by political concerns that publics no longer support large-scale military deployment. And similarly, in relation to the primary NATO function of collective defence, some polls show declining support among the publics of various NATO member states for actually coming to the aid of an ally when attacked.

So is it really about redesigning the strategy or is some of it about having to work within the confines of public opinion?

How much did public opinion drive the campaign to push back ISIS in Iraq and Syria? I think there was [an idea to] scale down the intervention, provide a smaller coalition force for an Iraqi army to fight nefarious elements – terrorist elements, violent extremist organizations – in Iraq.

How much of that was driven by ‘something else’? I think the something else is ungoverned spaces. I’ve always maintained that ungoverned spaces and a lack of rule of law are a threat to all of us. So if we look at what happened in Afghanistan pre- and post-9/11, it was an ungoverned space that was used as ‘the base’ – which is the translation for Al-Qaeda. We went back in there to eradicate Al-Qaeda and then got involved in a campaign against the Taliban, which are trying to overturn all the progress that we made in Afghanistan.

We went in to Iraq and Syria to help our Iraqi friends and allies because we don’t want ungoverned spaces there. About a year and a half ago, if you’d looked at the successes of ISIS on the battlefield, you’d see this ink blot that was encroaching on the Green Zone around Baghdad. They controlled a lot of territory, and from that territory they could conduct violent extremist operations elsewhere, like here in Europe.

And they did it. They’ve done it in national capitals, in Madrid, here in London, in Paris, in Belgium. They [attacked] the airport where I used to fly out of all the time when I worked at SHAPE headquarters. Nobody wants that.

So eradicate it there, on the battlefield, and eliminate the threat there, and the threat does not come here. In my own country – in San Bernardino, California; in the nightclub in Orlando – these were home-grown terrorists that were radicalized and inspired by ISIS. By reading some of the literature – Dabiq, for example – being online and being convinced to turn over to their side. In the parliament of the Canadian government – we saw it there. So eliminate it at its source, and you protect your own capital.

I think that public opinion is certainly part of the reason that we don’t do large interventions, large-scale wars, but I don’t think that had as much to do with whether we go after the threat, because the threat is against all of us.

How do you feel about how public opinion plays into what has generally been the primary function of NATO, which is defence against sovereign threats – revisionist powers you might call them?

I heard what you said about how some nations don’t believe that Article V [the NATO collective defence clause] is as solid as I think it is. I think if you’re a state actor, and you’re one of the 29 members of the alliance, you signed up to every one of those articles in the Washington Treaty [NATO’s founding document]. You believe in them. And I fully believe that the nations and their militaries believe in those articles, and if there’s an attack on one, they will come to the defence of others.

The only time Article V has been used since the advent of NATO in 1949 was the attack on America on 9/11. Americans deeply appreciate what the alliance did to come to its defence in the war on terror. And just like you did, we will come to your defence, and I believe every other nation will as well.

Certainly public opinion plays a part in this. You can read surveys or polls, and there are some who may not support full membership in NATO or what NATO means. They get a voice, but they don’t necessarily get a vote. If their government has signed up for this and is a full, bona fide member of NATO, there’s an obligation there, and that obligation must be fulfilled.

You mentioned ungoverned spaces, and making sure that they are eliminated so that they can’t be used as bases. There are different actors taking part in interventions now that use similar justifications, like Russia in Syria and Saudi Arabia in Yemen. Are you concerned about the methods that they use in their interventions and whether they present an alternative model of intervention to the Western model?

I think what the Russians have done in Syria is multi-dimensional and for many different reasons. One of those reasons is to get a foothold in a warm-water port from which to operate in the Mediterranean, so that they can try to show presence, and if necessary show force, in the Mediterranean theatre. Some of the Kilo-class submarines that they have in the eastern Mediterranean are eventually, according to Russian literature, headed into the Black Sea, so that they can control these bodies of water.

They do other things throughout the region to try to divide allies and partners. In cyberspace, they do things every day with the use of social media. There is lots of literature lately on trolls and bots and cyberattacks on different parts of the network. These are things that Russia does to try to destabilize the alliance.

But we’re still together and we’re still strong. So they’re unsuccessful. And we can’t allow them to be successful. We need to work on that aspect, that new domain, in cyber and social media to push back strongly.

And what is your view of Saudi Arabia’s operations in Yemen?

Saudi Arabia has seen a threat and they’ve acted on it. Saudi Arabia is an ally of the United States, and we hope that it will continue to be an ally of the United States. There are many different factions working under the radar in Yemen to destabilize Yemen. Again, this is an ungoverned space. I think the jury is still out and it remains to be seen what the outcome of that operation will be.

I won’t venture a guess but I will say it’s my hope that eventually the fighting stops, everybody goes back to their corner and we figure out how to legitimize a government in Yemen that can prevent the growth of terrorist or violent extremist organizations.