On Sunday, after months of bitter wrangling, the two leading candidates in Afghanistan’s presidential election agreed to form a national unity government. Ashraf Ghani, a Pashtun technocrat, is to be president, and Abdullah Abdullah, a former foreign minister of mixed Tajik and Pashtun descent, is to be chief executive, a newly created post akin to prime minister. The power-sharing agreement came after an audit of the ballots cast in April, in an election widely believed to have been partially rigged. It has no basis in Afghanistan’s election law. And given the rancor that has come before, it may not hold very long.

This deal, which was brokered with help from Washington, is yet another makeshift compromise that only reveals the shortcomings of the United States’ 13-year presence in Afghanistan. But rather than admit these failures, American and NATO officials would have us think that democracy is gaining traction in Afghanistan, the Taliban insurgency has stalled and Al Qaeda is being defeated. All these arguments, of course, serve as an excuse for U.S. troops to start withdrawing at the end of the year, a plan that seemed wrong when it was made in December 2009 and is proving catastrophically wrong now. 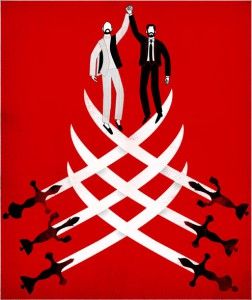 John Sopko, the special inspector general for Afghanistan reconstruction, apparently is the only official in Washington who dares speak truth to power. In a Sept. 12 speech at Georgetown University, he said that Afghanistan “remains under assault by insurgents and is short of domestic revenue, plagued by corruption, afflicted by criminal elements involved in opium and smuggling, and struggling to execute basic functions of government.” His comments were largely ignored by the American media, and there was no immediate reaction from the Obama administration.

And yet anything less than a heavy dose of honesty and fresh thinking by Afghans and their Western supporters will almost certainly mean the relapse of Afghanistan into civil war and the emergence of groups even more extreme than the Taliban, as has happened in Iraq and Syria.

Moving from the lengthy U.S. military presence to full Afghan sovereignty was premised on the completion of four distinct transitions. But none has been successfully carried out, despite more than $640 billion in U.S. direct spending in Afghanistan between 2002 and 2013.

The most critical transition, the one on which everything else rested, was political. Rather than build state institutions or carry out much-needed electoral reforms, President Hamid Karzai spent his long tenure encouraging a form of crony politics that failed to sap the power of the warlords. He won a second term in 2009, after a vastly fraudulent election. The following year, according to U.N. officials, he asked that the United Nations stop supervising elections in the country, and Washington and NATO went along.

The second promised transition was military. U.S. forces were to hand over security matters to Afghan forces, proving that the new, U.S.-trained Afghan Army would then be able to hold back the Taliban on its own. Yet Interior Minister Mohammad Omar Daudzai told Parliament in Kabul on Sept. 16 that the previous six months had been the deadliest ever for the Afghan police. Today there is fighting in 18 of 34 provinces, Afghan and NATO officials have told me. In many areas, Afghan soldiers are barely able to secure their own bases, much less retake lost territory. Helmand, the critical drugs-producing province in southern Afghanistan, is at risk of being taken over by the Taliban. If it falls, all of southern Afghanistan might too.

The third failed transition has to do with economics. According to a senior Afghan official at the Finance Ministry, The Washington Post reported recently, the Afghan government is broke and needs an emergency $537 million bailout; it was barely able to pay more than half a million government employees this month. Money spent on schools and hospitals has dramatically improved education and health for Afghans, but these services remain dependent on foreign funding. There has been little large-scale investment in agriculture or basic industry; instead, the bulk of the economy has focused on servicing foreign troops and on their spending. And now the troops are about to withdraw.

When I first visited Afghanistan in the 1970s, the country was desperately poor, but it was almost self-sufficient in food and had a small yet thriving export trade in fruit, handicrafts, furs and gems. Today, Afghanistan imports much of its food and it produces very few commercial goods. The service economy, which is run by the middle class, has been collapsing, as both educated people and billions of dollars in capital have left the country. The resulting vacuum opens the way for the opium-fed underground economy to expand enormously, breeding crime and corruption.

The fourth contribution expected of the U.S. presence was insulating Afghanistan from foreign interference, which many Afghans fear as much as the Taliban. Iran, Pakistan and Russia, but also India, Saudi Arabia and other states helped fuel the civil war in the 1990s. The Obama administration pledged in its first term to negotiate a noninterference agreement among Afghanistan’s neighbors. But that, too, has not happened, and the country remains vulnerable to meddling from outside.

History will not look kindly on the legacy of the U.S. government and Mr. Karzai in Afghanistan. But this also means that Afghanistan’s new leaders can do better, and now, simply by acting responsibly — and working together to legitimize the results of this problematic election that has brought them to power.

The four-page joint agreement between Mr. Ghani and Mr. Abdullah calls for convening a loya jirga, a traditional gathering of tribal representatives and elected district councilors, in the next two years in order to amend the Constitution to reflect the recent creation of the chief executive post.

But a loya jirga should be called as soon as possible, so as to promptly give constitutional cover to the power-sharing agreement between Mr. Ghani and Mr. Abdullah. The assembly should also discuss how the present presidential system, which is highly centralized, could be improved and how electoral reforms can be made to prevent future vote-rigging. And the gathering should be convened before the parliamentary elections scheduled for next year: This would allow the legislators who are elected then to have some of the legitimacy that is lacking at present.

2015 is supposed to mark the start of Afghanistan’s “Transformation Decade.” But if the country is to even get to 2015 in one piece, its new leaders must act fast to correct course after the failed transformation of the last decade.

Ahmed Rashid is the author of six books on Afghanistan, Pakistan and Central Asia.