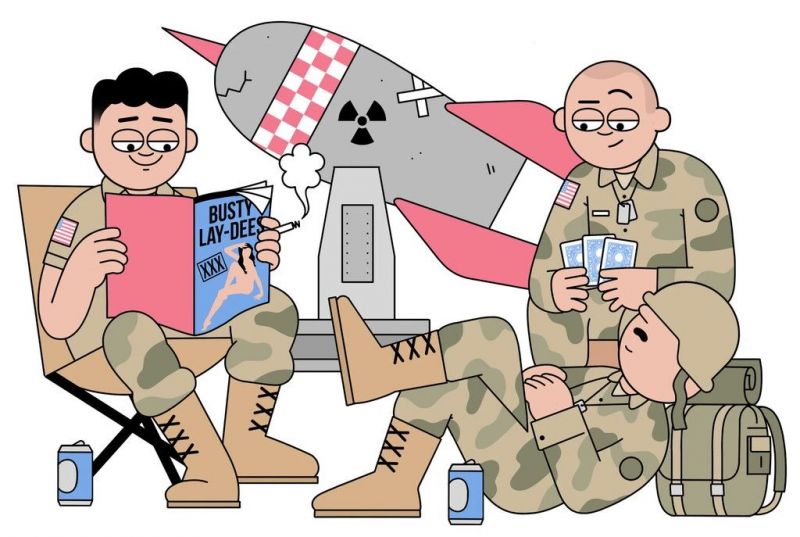 Earlier this month the Pentagon released a devastating assessment of its own management of the nation‚Äôs nuclear arsenal. The report, authored by two widely respected former four-star officers, judged that America‚Äôs nuclear weapons complex ‚Äî particularly the personnel who operate and maintain it ‚Äî is near its breaking point, worn down by years of neglect, lack of funding and unnecessarily invasive and inquisitorial screening of employees. This malaise has been exacerbated by bouts of apathy and even hostility on the part of prominent voices in and out of government: The prevalent attitude is that there are more important national security priorities and, among some, that nukes are useless and should be left to rust.

The situation is considerably worse than we thought ‚Äî even worse than in 2007 when it was revealed that the Air Force had inadvertently transported six live nuclear weapons from North Dakota to Louisiana. Last week a senior Pentagon official claimed in a background briefing that unless immediate and substantial action is taken to modernize antiquated infrastructure, prioritize the issue, and relieve suffocating bureaucratic pressure, the nation‚Äôs nuclear complex risks coming apart at the seams.

To avert this, the Pentagon has identified roughly 100 remedial actions, steps estimated to cost around one to two billion dollars annually, on top of the $15-$16 billion per year the department anticipates spending on nuclear forces in the coming half-decade.

That‚Äôs a pretty penny. And so voices have quickly been raised to say that this would be a foolhardy waste of money. Aren‚Äôt nuclear weapons becoming obsolete? Shouldn‚Äôt we welcome this review as a step toward a nuclear-free world? Shouldn‚Äôt we spend this money on conventional forces we might actually use? Aren‚Äôt nukes a monetary sinkhole and a strategic dead-end?

The answer to all these questions is no. Spending this money and making these changes is not just advisable, it‚Äôs essential.

First, the world is becoming more dangerous. America and the allies it has pledged to defend face challenges from a resurgent Russia, an increasingly assertive China, a bellicose North Korea and a recalcitrant Iran. At the same time, Russia, China and North Korea have all been modernizing their nuclear arsenals with a view toward using them in the event of conflict with the United States. Moreover, as the Pentagon is making more and more clear, non-nuclear military buildups, especially in Russia and China, are jeopardizing America‚Äôs conventional military advantages ‚Äî advantages that had until now allowed America to reduce its emphasis on its nuclear arsenal.

At the same time, the problems identified in the report and the consequent need for money and attention are not the product of some irremediable defect in the nation‚Äôs nuclear arsenal. They arose, as the Pentagon review made clear, because America‚Äôs nuclear weapons have suffered from a quarter century of neglect from the Pentagon, the Air Force and Congress.

The small amount of spending has been miserly. For instance, missileers at Minot, Malmstrom, and the F.E. Warren Air Force bases have had to resort to Fedexing a 1960s-era tool necessary for the maintenance of intercontinental ballistic missiles among the three bases where they are housed.

Nor has the problem been limited to money. Nuclear personnel have been subjected to a near-Orwellian inspections system and a degree of micromanagement far beyond what security and effectiveness require. For instance, the review reported that some especially conscientious personnel forgo important medical treatments because they fear that doing so will lead to their being suspended from work for weeks since even the most minor medical exams bureaucratically trigger the requirement for full-scale review of the individual‚Äôs reliability. Even a broken finger or sprained ankle is reason for temporary suspension from duty.

Little wonder, then, that there have been mistakes and a general decline in the quality of performance. Indeed, as the review made clear, it‚Äôs a testament to the dedication and skill of the armed forces‚Äô nuclear specialists that things have stayed together as well as they have ‚Äî but there is no margin left for continued jury-rigging.

If a nation needs something, it should be willing to pay for it. And strategic circumstances make clear that the United States will need a powerful and first-rate nuclear arsenal for years to come. Ensuring we have one won‚Äôt be cheap ‚Äî but it also won‚Äôt break the bank.

At its peak, recapitalizing the nation‚Äôs nuclear arsenal and the facilities that sustain it would only consume around 7 percent of the defense budget. But a lot of that bill will hit in the coming 10 to 15 years, and so Congress and the executive branch will need to make special efforts to allocate the resources required now. One way to do so might be through a dedicated national deterrent fund fenced off from the rest of the defense budget.

But this is not only about money. It‚Äôs also a question of political and institutional support. The president and major officials in both parties have been neglectful, and many on the left in particular talk openly about the need to sideline and get rid of nuclear weapons.

This needs to change. Instead, the executive branch and Congress should demonstrate clear and consistent support for the American nuclear deterrent and should ensure that the military services ‚Äî and particularly the Air Force ‚Äî focus on maintaining and modernizing it.

In an increasingly hazardous and unstable world, allowing America‚Äôs nuclear weapons to atrophy is a luxury we can no longer afford. Last week‚Äôs review is a gentle wake-up call. We should take this opportunity to fix the problem rather than wait for a ruder jolt.

Elbridge Colby is the Robert M. Gates Fellow at the Center for a New American Security. He previously worked in the Pentagon and for the Congressional Strategic Posture on nuclear issues.