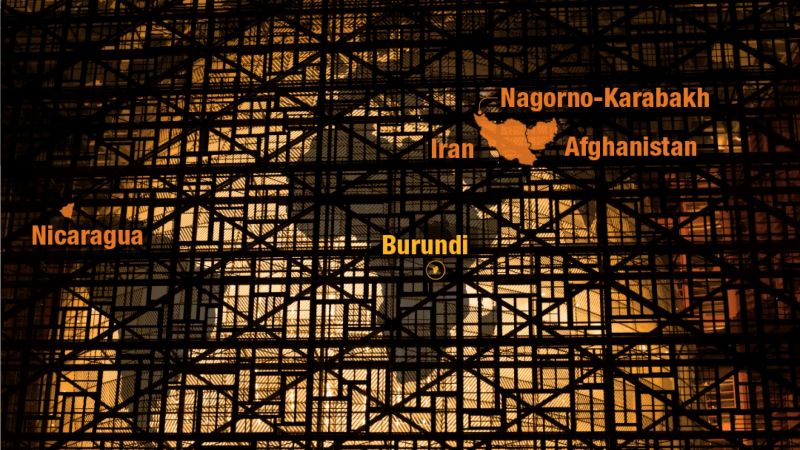 Reform promises by Burundian President Evariste Ndayishimiye have led to a marked improvement in relations with the EU. In this excerpt from the Watch List 2021 – Autumn Update, Crisis Group urges the EU and its member states to set benchmarks for Burundian human rights reforms and ensure compliance with EU-Burundi agreements.

After years of strained ties, the European Union (EU) and Burundi again are on speaking terms. The country’s president, Evariste Ndayishimiye, in power since June 2020, started talks with Brussels in February that could eventually lead the EU to resume direct budgetary support for Burundi. In 2016, due to concerns about Burundian government abuses, the EU invoked the suspension provisions in Article 96 of the Cotonou Agreement – its partnership pact with various African, Caribbean and Pacific states – as the basis for cutting that support amid the violent turmoil following former President Pierre Nkurunziza’s contested 2015 election bid. At roughly the same time, Brussels also sanctioned several Burundian officials for their repressive practices and their role in stoking the country’s political crisis. But President Ndayishimiye has sought to put relations between Burundi and its donors on a better footing. By loosening restrictions on civil society and taking a hard line against government corruption, he has tried to allay fears that he will govern like his late predecessor, Nkurunziza, while leaving the door open for dialogue.

Brussels can take heart that several rounds of negotiations with Gitega, Burundi’s official seat of government, have yielded a general Burundian commitment to embark on human rights and good governance reforms. The EU should not open the floodgates of aid money, however, until it can agree with Burundian authorities on more precise benchmarks for these reforms, in light of continued, widespread and destabilising abuses. In the past months, and notwithstanding President Ndayishimiye’s willingness to rein in repression, the intelligence services have cracked down harder on government opponents. The Imbonerakure, the youth militia of the ruling Conseil national pour la défense de la démocratie – Forces pour la défense de la démocratie (CNDD-FDD), which is dominated by the majority Hutu ethnic group, also continues to harass civilians and target dissenters. Certain members of the minority Tutsi ethnic group are at particular risk. Though Ndayishimiye may be open to addressing alleged abuses, ruling-party hardliners could press him to resist reforms that might loosen the party’s grip on power.

For Brussels to steer Burundi toward reform, it will need to adopt a consistent negotiating position with Gitega, and make sure it has the ability to monitor the latter’s adherence to the agreements it makes. Two obstacles could derail those efforts. First, EU diplomats themselves appear to hold different views as to how hard they should push for reform. Secondly, the pending conclusion of multilateral observer and monitoring missions, partly due to Ndayishimiye’s charm offensive, means that the EU will no longer have important sources of information about Burundi’s performance in meeting its commitments. Perhaps most importantly, the UN Commission of Inquiry on Burundi is likely to wind down its multi-year efforts after it reports to the UN Human Rights Council, which rounds off its 48th session on 8 October.

In negotiations with Burundi, the EU and its member states should thus:

Despite President Ndayishimiye’s attempts to convince international actors that he is serious about reform, the ruling party’s machinery of repression is still firmly in place. According to Human Rights Watch and the UN Commission of Inquiry, the Imbonerakure and intelligence services continue to violate human rights, mainly by targeting opposition members, young Tutsi and members of the army’s old guard, also mostly Tutsi, whom the CNDD-FDD sees as security threats.

The authorities often use the youth militia to supplement or replace the security forces, particularly in rural areas, giving them free rein to terrorise the population. The militia, which Ndayishimiye oversaw when he was CNDD-FDD secretary general, is known for shaking down, torturing, abducting, sexually abusing women and killing opposition members and ordinary citizens alike. Its members conduct night patrols and house visits to demand funds for CNDD-FDD coffers or personal gain. They also prevent the opposition from organising, by disrupting meetings and vandalising offices. While Ndayishimiye has taken some steps to reel in the Imbonerakure, for example by directing its members to stop extorting financial contributions from the population, he has achieved mixed results at best. The intelligence services, meanwhile, have stepped up abductions and arrests of people considered government opponents, often using internal and cross-border security incidents as cover for round-ups.

Any attempt by Ndayishimiye to roll back these practices is likely, however, to meet resistance from top generals in the CNDD-FDD, which started its life as a rebel outfit but has held power since 2005, when it transformed itself into a political party. Several top party and military figures, including many who enriched themselves during former President Nkurunziza’s fifteen years in power, are deeply suspicious of Ndayishimiye’s tentative rapprochement with the EU and baulk at the notion of conditions attached to renewed budgetary aid. The president will also likely take flak from hardliners who were Nkurunziza allies, such as Prime Minister Alain-Guillaume Bunyoni and Interior Minister Gervais Ndirakobuca, who is under EU sanctions for his role in the 2015 political crisis. Both of these powerful party chiefs supported Nkurunziza’s preferred candidate, Pascal Nyabenda, in the 2020 presidential election. Having appointed them to top posts, Ndayishimiye nevertheless faces a struggle to retain their loyalty.

Ndayishimiye’s engagement with Western, regional and other diplomats, meanwhile, has contributed to their support for a drawdown of multilateral oversight bodies tasked with reporting on Burundi, making it hard to establish whether change is genuine and sustainable. In December 2020, the UN Security Council removed Burundi from its agenda, noting improved security in the country and acknowledging Ndayishimiye’s reform efforts. The African Union Human Rights Observers and Military Experts Mission and the Office of the UN Secretary-General’s Special Envoy in Bujumbura, both established to monitor the situation in the country and find a way to end the violence, closed in May 2021.

The UN Commission of Inquiry is the only internationally mandated body still active in the country monitoring human rights abuses and the risk of further conflict. But the UN Human Rights Council will likely not renew its mandate, and it remains to be seen whether there is sufficient Council support for replacing it with another oversight mechanism. This matter will be resolved on 7 or 8 October when the Council votes on its Burundi resolution, which includes an EU proposal to create a new mandate for a special rapporteur who could take over some of the Commission of Inquiry’s monitoring functions.

What the EU Can Do

It is good news that Burundi and the EU are back in regular contact. Diplomats tell Crisis Group that the Burundian authorities have become significantly more forthcoming since President Ndayishimiye assumed office. Burundian officials show a clear appetite for dialogue, and the reasons why are readily apparent. The country needs financial support. Its economy is shattered following the 2015 political crisis and years of dysfunctional government. It never fully compensated for the loss of the EU as its biggest donor by turning to less traditional partners, such as China, Russia and Turkey, who offered only limited assistance. Even some CNDD-FDD hardliners may thus be inclined to continue negotiation.

This situation presents an opportunity for the EU, which should use negotiations to encourage the Burundian authorities to make reforms that can help bolster long-term stability and avoid the return to armed violence. Moving forward, the EU should focus on three priorities to ensure it can steer Burundi toward meaningful reform.

First, the EU should propose clear benchmarks on human rights that Burundi needs to meet if it is to receive renewed budgetary support from Brussels. The roadmap of reforms prepared by the Burundian authorities is an important first step, but it is not sufficient. A copy reviewed by Crisis Group details steps the government should take to adopt policies and strengthen institutions but makes no reference to the Imbonerakure. Nor does it define what authorities should actually do to curb abuses by the youth militia and intelligence services.

The EU should push for benchmarks that are consistent with the concerns expressed in the 2016 European Council decision to suspend aid in the first place, focusing in particular on setting out further commitments to corral abuses by the Imbonerakure, the main tool of CNDD-FDD’s repression, including by holding accountable those responsible for egregious abuses. Brussels should also draw upon the latest UN Commission of Inquiry reports, using the rights violations and other abuses documented as its reference points for the situation that Gitega must remedy. Benchmarks should also reflect the expectation that Burundi will cooperate with human rights monitoring mechanisms backed by Brussels.

Secondly, in the event that the UN Human Rights Council disbands the UN Commission of Inquiry and – as contemplated by the draft resolution on the calendar for 7 or 8 October – replaces it with a special rapporteur on Burundi, the EU and its member states should put their efforts behind making this reporting mechanism meaningful. The EU, which drafted the resolution that would provide the special rapporteur with his or her mandate, should also allocate sufficient resources to finance the work of local non-governmental organisations on which previous reporting mechanisms have relied heavily for information. In the event there are not enough votes for the special rapporteur position on 8 October, a fallback would be for the EU to strengthen its own capacity to monitor the authorities’ compliance with any agreement to which Burundi’s government commits.

Finally, when entering negotiations, EU officials should present a united front. At present, some EU delegates seem keen to turn the page and reach political normalisation with Burundi sooner rather than later. But other officials in Brussels appear convinced that Burundi requires meaningful reforms if it is to avoid further protracted crises, and thus are prepared for lengthy negotiations to see that Gitega adopts the best possible practices. Moreover, in order to revoke the suspension of financial assistance under Article 96, member states in the EU Council will need to adopt a legal act that requires unanimity, which may take time, particularly in the event of enduring concerns about Burundi’s progress.

The EU’s internal dissonance has distorted perceptions of the EU position in Burundian circles and could complicate talks going forward. Indeed, in June, after a meeting between Ndaysihimiye and the EU delegation’s head, the Burundian authorities wrongly announced on the presidency’s official Twitter account that Article 96 had been revoked. National and regional media reported this statement as fact, undermining the public’s understanding of the negotiations. Going forward, it will be important for Brussels to run a tight ship, with a coordinated position and messaging discipline, if it is to achieve its important goals in the negotiations.