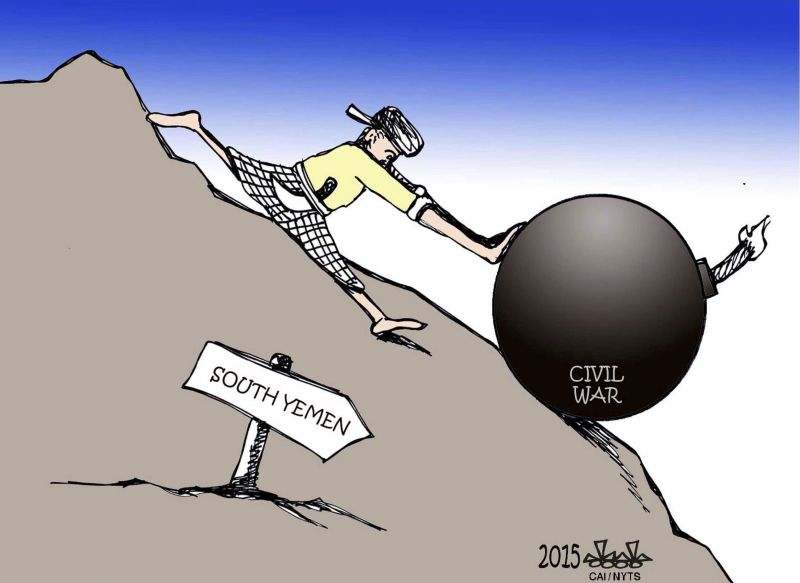 The last American troops are being pulled out of Yemen after al-Qaida fighters stormed a city near their base last week. Houthi rebels who have already overrun most of the country are closing in on Aden, the last stronghold of President Abdrabbuh Mansour Hadi.

The U.S. State Department spokesman put the best possible face on it, saying that “due to the deteriorating security situation in Yemen, the U.S. government has temporarily relocated its remaining personnel out of Yemen.” He even said that the U.S. continued to support the “political transition” in Yemen. But there is no “political transition.” There is a four-sided civil war.

Why would anybody be surprised? There has been no 25-year period since the seventh century when there was not a civil war of one sort or another in Yemen. (And the impression that it was less turbulent before that may just be due to poor record-keeping.) But this time it’s frightening the neighbors.

Yemen’s current turmoil started in 2011, when the dictator who had ruled the country for 33 years, President Ali Abdullah Saleh, was forced out by nonviolent democratic protesters (and some tribal militias who backed them). Saleh’s deputy, Abdrabbuh Mansour Hadi, took over and even won an election in 2012, but he never managed to establish his authority over the divided country.

Hadi had the backing of the United States and most of the Arab Gulf states (including Yemen’s giant northern neighbor, Saudi Arabia) because he was willing to fight the Islamist extremists who had seized much of southern and eastern Yemen.

But his main preoccupation was actually the Houthis, a tribal militia based in the largely Shiite north of Yemen.

Angry at the status that the north was being offered in a proposed new federal constitution, the Houthis came south in force and seized Sanaa last September. In February, after months of house arrest, Hadi fled to the great southern port of Aden, his home town and Yemen’s second city, and declared that as the capital instead. So the Houthis came south after him.

Meanwhile, Saleh, the former president, returned from exile and made an alliance with the Houthis — despite the fact that he had launched six major offensives against them back when he was president. That’s what radicalized the Houthis in the first place, but they needed some national figure on their side as they moved deeper into the south, and Saleh is at least a Shiite. He will have to do. Clear so far? Good.

The third contender for power is al-Qaida in the Arabian Peninsula (AQAP), whose forces, like the Houthis, are only a half-hour’s drive from Aden. As its fighters closed in on Aden last week, AQAP seized the town next to the airbase where the American forces were living, and Washington ordered them out. The last thing it wants is American military hostages in AQAP’s hands.

It is not yet clear whether AQAP and the Houthis will fight each other first (and then the winner gets to attack Aden), or whether one of them will grab the city and try to defend it from the other. It’s even possible that Hadi can hold Aden — but he probably can’t take back the rest of the country.

And we mustn’t forget the fighters of Islamic State, who announced their presence in the country last month. Their sole operation of note so far has been the suicide attacks on two Shiite mosques in Sanaa.

But as Sunni fanatics in a country that is currently being overrun by its Shiite minority, Islamic State will not lack for recruits. If it doesn’t qualify as a full fourth force yet, it soon will.

In conventional terms, Yemen doesn’t matter much. It has a lot of people (25 million), but it is the poorest country in the Arab world. Its oil has almost run out, and its water is going fast.

You could argue that its geographical position is “strategic” — at the entrance to the Red Sea, commanding the approach to the Suez Canal — but it’s hard to see any Yemeni government getting the kind of military forces it would need to close that waterway.

What worries people is the possibility that the jihadis (either al-Qaida or Islamic State) could come out of this on top. They are certainly not there yet, but many Sunnis will see them as the best chance to break the hold of the Shiites who, despite their internal quarrels, have collectively dominated the country for so long.

Shiites are only one-third of Yemen’s population and the resentment runs deep. The Houthi troops now occupy almost three-quarters of the country’s densely populated areas, but it would be an exaggeration to say that they actually control all that territory. They are spread very thinly, and if they start to lose they could be rolled up quickly by the jihadis.

That could turn Yemen into a terrorist-ruled “Islamic State” with five times the population of the one that sprang into existence last July on both sides of the Syrian-Iraqi border. The odds are against it, but after that “July surprise” nobody is ruling it out.

Gwynne Dyer is an independent journalist.