I spent nearly seven years in a Chinese prison for being a leader of the 1989 Tiananmen Square protests. I was freed in 1998, and the Chinese government let me leave the country. I chose to go to the United States, where I could freely speak my mind without fear of being thrown in prison.

I earned a doctorate in history in 2009 and took a teaching position in Taiwan. I taught contemporary Chinese history and led a weekly seminar — a “China salon” — of open discussions about Chinese society and politics. Many of the seminar topics, like the 1989 protest movement and political reform, were taboo in the mainland but safe for public discussion in Taiwan.

The salons drew large numbers of mainland students attending Taiwanese universities on exchange programs who were hungry for the truth about China’s past. Many of them wondered about the Tiananmen Square crackdown, for example, because there is little mention of it in China’s history books.

I returned to the United States earlier this year and brought the salons to American universities. Given the long tradition of free speech in the United States, I assumed that the forums would fare even better in America, where some 329,000 Chinese students attend college. I hoped that public discussions of topics off-limits in China might challenge visiting Chinese students and encourage them to embrace Western democratic values. 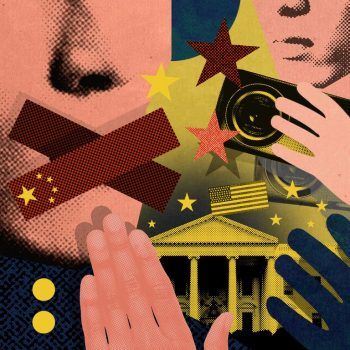 But instead, over the past three months, my efforts on American campuses have been stymied. The Chinese Communist Party is extending its surveillance of critics abroad, reaching into Western academic communities and silencing visiting Chinese students. Through a campaign of fear and intimidation, Beijing is hindering free speech in the United States and in other Western countries.

The Chinese government, or people sympathetic to it, encourage like-minded Chinese students and scholars in the West to report on Chinese students who participate in politically sensitive activities — like my salons, but also other public forums and protests against Beijing. Members of the China Students and Scholars Association, which has chapters at many American universities, maintain ties with the Chinese consulates and keep tabs on “unpatriotic” people and activities on campuses. Agents or sympathizers of the Chinese government show up at public events videotaping and snapping pictures of speakers, participants and organizers.

Chinese students who are seen with political dissidents like me or dare to publicly challenge Chinese government policies can be put on a blacklist. Their families in China can be threatened or punished.

When these students return to China, members of the public security bureau may “invite” them to “tea,” where they are interrogated and sometimes threatened. Their passport may not be renewed. One student told me that during one of his home visits to China he was pressured to spy on others in the United States.

And in one egregious example of intimidation, in March 2016, the police in China abducted the relatives of the Chinese journalist Chang Ping, who lives in exile in Germany, after he published an article in a German publication that was critical of President Xi Jinping’s crackdown on free speech.

Chinese students abroad hear these stories and, with good reason, tread carefully. Many have become too afraid to attend open forums like my salon, and those who do show up mostly keep a low profile.

Not all Chinese students in the West condemn their government. Many, in fact, actively support Beijing, often by shaming their fellow students who criticize Beijing.

Nationalism is rampant in China and many students, who grew up subjected to the full force of the Chinese government’s “patriotic education program,” carry it abroad. They blame Western powers for causing a “century of humiliation” before the Communist takeover in 1949 and for instigating trouble and constraining China’s growth as a global power. These “patriotic” students and scholars team up with the Chinese consulates to sabotage protests critical of the Chinese government. Many resort to online harassment of Beijing’s critics.

In a typical example, Shuping Yang, a Chinese student at the University of Maryland in May praised the “fresh air of free speech” in the United States during her commencement address and then faced a barrage of threats online from Chinese citizens and the state media for “insulting the motherland.” The China Students and Scholars Association encouraged people to rebut Ms. Yang’s views. Under the pressure, Ms. Yang issued a public apology, asking for forgiveness and declaring that she did not intend to belittle her country.

Even Western educational institutions that have benefited from Chinese government funding, student enrollment and Chinese private donations have succumbed to pressure from Beijing. Some have canceled activities or programs, and others have resorted to self-censorship.

Springer Nature, which publishes prestigious science magazines like Nature, recently blocked access to some articles from China to avoid being banned in the country.

The country’s growing influence abroad has received a lot of attention in Australia, where journalists have detailed how Chinese money has infiltrated the political process. Chinese students in Australia can come under heavy pressure and shaming from other nationalist Chinese students for criticizing Beijing.

Recently, Clive Hamilton, a professor of public ethics in Australia, said that his publisher delayed the release of a book of his that investigates the rising influence of the Chinese Communist Party in Australia for fear that the Chinese government may sue for defamation. We can be certain that Mr. Hamilton’s name has been added to a list of Western scholars who are banned from China, another common tactic used against outspoken China scholars whose work the Chinese government dislikes.

These threats to free speech should prompt Western politicians to stand up to China. I’m disappointed that President Trump chose to focus mainly on trade, rather than human rights, during his recent trip to China. There appear to have been no attempts to push back against Beijing’s increasing proclivity to commit rights abuses beyond its borders. Such appeasement will only embolden Mr. Xi, further threatening Western democratic institutions.

In recent months, the Trump administration has restarted talks with its allies in Asia about how to counter China’s growing assertiveness in the region. It is equally important for the United States to shore up its policies at home to stop China from undermining core democratic values — both on campus and beyond.

Wang Dan, a former leader of the 1989 Tiananmen Square protests, is the founder of New School for Democracy, an independent think tank that promotes democratic reforms in China. This essay was translated by The New York Times from the Chinese.