These days, Berlin is like a giant that is stretching its limbs and trying to find a new balance. For the first two decades after the fall of the Berlin Wall in 1989, the giant moved only its right foot and arm. No longer divided by a wall, Berlin was divided in other ways. Everything that was new and exciting was happening in the East.

Those first years were the time of sky-high cranes, the overnight birth of entire new urban districts where vast empty spaces had sat for years, when people seemed to prefer going to construction sites instead of the theater, opera or museums. When I’d get on the subway and head east from Alexanderplatz in the center to the Ostbahnhof station, even at 2 a.m. there wouldn’t be a single empty seat. I’d find myself squeezed in amid a poor but cheerful bohemian crowd on its way from one club to the next — since the clubs, too, had all established themselves in the eastern half of the city. 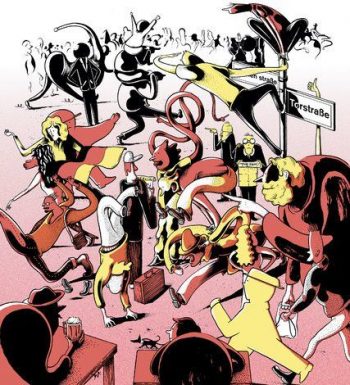 In contrast, the western half of the city — with the exception of the bustling immigrant neighborhoods in Kreuzberg and a few squares in Schöneberg and Charlottenburg — seemed to have fallen asleep. Long-distance rail service had been suspended at the Zoo train station, old West Berlin’s main station; the war-ravaged ruins of the famous Gedächtniskirche were, and have remained for years, hidden by scaffolding. The Zoo Palast movie house and the Theater des Westens, which had once attracted thousands of people a day, seemed like faded stars from the past. And when I’d cross the Kurfürstendamm — our Broadway — on my way home at 11 p.m., I’d see deserted sidewalks, and would watch in disbelief as cafe waiters stacked chairs, closing early for lack of business.

Over the past five years or so, though, this has begun to change. The Kurfürstendamm is once again full, with lines forming in front of new clubs and restaurants. In early 2013 the Waldorf-Astoria Berlin opened, just off the Kurfürstendamm — at 387 feet, it is one of the tallest buildings in the city, and a shiny beacon for the West’s newfound appeal. The Zoo Palast has been fully renovated, and is now one of Berlin’s most beautiful and popular movie houses.

Clever architects turned the so-called Bikini-Haus, a 1950s office building that runs alongside the Berlin Zoo, into a trendy mall, with an elegant hotel next door. When I wanted to go to the Monkey Bar on the hotel’s 10th floor, I had to wait half an hour before I was able to get on the elevator. The bar’s glass walls offer a panorama of the western city center and a view of the monkey cages in the zoo — though every time I looked for the monkeys, a cocktail glass in my hand, they seemed to be asleep in their houses.

Until the early 1930s, West Berlin was the city’s racing heart. Now, it is beating once again. But it has not eclipsed the east — far from it. The whole city is prospering: Unemployment has fallen; the economy is growing faster than in any other German city. Finally, Berliners feel good in their city.

No, wait: not so much in their city as in their kiez, the local term for neighborhood. Interestingly, even as the city has rebalanced itself, it has broken apart into dozens of pieces. An August survey by Rundfunk Berlin-Brandenburg, a regional broadcaster, found that while 52 percent of respondents said they could easily imagine leaving Berlin for a good job in another city, fewer than 18 percent, answering a separate question, said they could imagine leaving their kiez.

Perhaps neighborhood loyalty is more or less evident in any major city. But Berlin’s case is special. It’s as if, even as all the surface evidence points to a unifying city, Berlin still can’t accept its own unification. Four out of 10 Berliners in the survey said they still didn’t feel at home in a united Berlin.

In part that’s because of the long, painful division between east and west. But it’s also because the city, in a country famous and infamous for efficiency and other “German virtues,” can’t seem to move forward on the kind of grand projects that might symbolize unity. The only large-scale project that is currently on schedule is the reconstruction of the palace of the Hohenzollern kings, in central Berlin, which many Berliners consider completely unnecessary.

Another major project, the Berlin-Brandenburg international airport, which really is indispensable, was originally scheduled to open on Oct. 30, 2011. After an initial postponement to 2012, it became apparent that there were problems with the airport’s fire protection system. In the meantime, thousands of other defects have come to light, further opening dates have come and gone, and the airport’s new chief executive doggedly refuses to name a new date. Instead, dates for the announcement of yet another projected opening are announced.

Berliners are reminded of a remark by a former East German head of state. Two months before the wall was built, in June 1961, Walter Ulbricht proclaimed, “No one intends to build a wall.” In a variation on this lie, Berliners now quip, “No one intends to open an airport.”

Even so, there is no lack of signs of a new “we-feeling” in Berlin. After Germany won the World Cup this year, I headed to the Kurfürstendamm. After just a few minutes, the procession of cars came to a standstill amid a concert of honking horns. Even though it began to drizzle lightly, none of the many convertible drivers put up their tops. Arms, legs and necks jutted out of every car window, roof and hatchback, celebrating with a collective victory sign. It was loud and cheerful, and hardly a false note was struck.

Suddenly a shrill voice behind me yelled: “Deutschland, Deutschland!” Repulsed, I turned around to discover that the piercing voice belonged to a young dark-skinned woman walking arm in arm with three girlfriends, carrying a long banner in the colors of the German flag, who eyed me belligerently, as if to say: Got a problem with the fact that I’m excited about our team’s win?

In short, Berlin is finding new ways to celebrate, to feel good about ourselves as Berliners, as Germans, no “east” or “west” or “foreigners” allowed. The fact that more and more people feel at home in Berlin today is more or less unwittingly supported by the diversity of our government, which was unthinkable in the years of the Cold War. For the past nine years, a woman from the former East Germany has been running the country from right here in Berlin; the federal president, also from the East, lives out of wedlock with his partner; the Ministry of Finance is overseen by a vigorous and highly respected man who happens to use a wheelchair; the Ministry of Defense by a woman with seven children; the longtime mayor of Berlin — now stepping down — is openly gay.

And these people, rather than living aloof from their fellow Berliners, mingle as if they were any old office workers. Years ago I discovered a wonderful little Italian place, and made it my own; years later, Angela Merkel started eating there, too. But when she does, there is no black limousine waiting out front, no secret service agent at the next table; the plainclothes security detail is sitting somewhere at the back of the room, inconspicuously drinking water or beer.

The chancellor always sits at the same table by the window, facing the door, though she doesn’t look up when someone enters, to avoid having to return any greetings. Quietly and intently, she engages in conversation with one or, at most, two partners, and also listens for long stretches. Her unobtrusive manner inadvertently spreads to the other guests. There is no murmuring at the tables — at most, a quiet allusion to the out-of-the-ordinary neighbor, coupled with the admonition, “But please don’t look over there now!”

“Am I getting too soft?” I asked my fellow diner, my voice lowered. “This comes pretty close to my idea of a civilian government!”

Peter Schneider is the author, most recently, of Berlin Now: The City After the Wall. This essay was translated by Sophie Schlondorff from the German.