Germany’s coalition government adopted a draft law two weeks ago requiring corporations to allocate at least 30 percent of supervisory board positions to women, starting in 2016. The bill will go to Parliament on Thursday and is widely expected to pass.

Yet those cheering this decision as a major coup should hold the schnapps. Although the quota may somewhat improve corporate diversity in Europe’s leading economy, there is little reason to think it will make any real difference for German women.

At present, men occupy about 80 percent of boardroom positions in Germany’s largest corporations; women hold only 22 percent of nonexecutive board positions in the 30 companies on its DAX stock exchange. 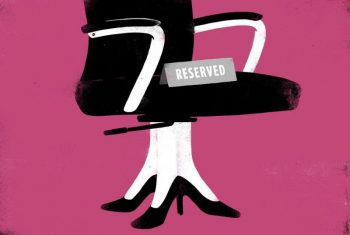 One might assume that Chancellor Angela Merkel, the first female head of state of a country where women hold 37 percent of the seats in Parliament, would be a natural champion of boardroom quota laws. But Ms. Merkel has long opposed them; in 2011 she rejected a quota proposal, saying she wanted a more “pragmatic solution.”

Indeed, it is political pragmatism, rather than ideology, that seems to underlie her change of heart: It wasn’t until 2013, facing fierce opposition from members of her own party and seeking a united front ahead of elections, that Ms. Merkel’s position shifted.

The chancellor’s initial skepticism was not unfounded. German corporations have a two-tiered board system: Nonexecutive (and less influential) “supervisory bodies” are staffed by outside advisers; full-time management boards oversee daily operations. The proposed quota will be restricted to supervisory bodies on which there is employee representation, which is the case at only about 100 of Germany’s listed corporations. Thus the policy will affect only a modest share of the work force (though a further 3,500 midsize companies will be required to set their own board quotas).

It’s hard to see how this narrow mandate will significantly improve the prospects of the average female worker.

Many European countries, including Austria, Belgium, Denmark, Finland, France, Ireland, Italy, Spain and the Netherlands, have adopted variations of a corporate board quota, albeit too recently to rigorously assess. A better test case is Norway, whose board quota law, passed in 2003, has required qualifying publicly listed companies to meet a 40 percent threshold for women since 2008. Studies of the Norwegian mandate offer little cause for optimism, however.

One study by two University of Michigan economists, published in 2012 in the Quarterly Journal of Economics, concluded that, while Norway’s quota policy raised female representation on the corporate boards to which it pertained, it ultimately “imposed significant and costly constraints on Norwegian firms.” The women who were brought on to corporate boards were younger and less experienced than their male colleagues; the economists found that those firms forced to increase women’s representation experienced a statistically significant loss in market value compared with other companies that year.

The German automakers Volkswagen, BMW, Daimler and Opel have threatened to move production out of the country rather than comply with the quota. Norway’s experience suggests they might not be bluffing: According to the 2012 study, numerous Norwegian corporations changed their legal structure or incorporated outside the country to avoid compliance. In 2009, the number of public limited firms in Norway was less than “70 percent of the number in 2001,” the economists found, while the number of private limited firms, which were exempt from the quota, had increased by more than 30 percent.

Similarly, conclusions presented in a more recent review, conducted by researchers in the United States and Norway, hardly make a ringing endorsement. Although women in the highest echelons of Norwegian firms were found to have benefited from quotas, there was “no evidence that these gains at the very top trickled down.”

The researchers also reported no narrowing of the wage gap or improvement in female representation in other leadership positions, and saw nothing to suggest that younger women had modified their education or career plans because of perceived new opportunities. (The study did note that women appointed to boards as a result of the quota were generally more qualified than their female predecessors.)

Quota advocates may counter that it is far too early to condemn these policies as failures and that focusing on short-term results misses the point: The symbolism of raising women’s corporate profiles justifies the regulation.

But, as Katrin Albsteiger, a 31-year-old German legislator, has argued, quotas may actually — if unintentionally — send a damning message that outweighs the benefits of increased visibility: that women can’t successfully compete in the workplace without government intervention. No one wants “to be labeled the ‘token woman,»’ Ms. Albsteiger wrote last month in a German political magazine; women “know that they can succeed” on their own.

No matter how skilled or hardworking, women admitted to boards in order to fulfill a quota are unlikely to be seen as equals whose presence at the table is merited. Indeed, it is impossible to know whether some Norwegian corporations lost money following the imposition of quotas because their new female hires were unqualified — or if fears that they might be were bad enough for investors. Worse, the placement of a few women in high-visibility roles could amount to little more than window-dressing that enables companies to sidestep more sustained reforms.

Where gender parity in Germany is concerned, there are legitimate reasons for optimism. Across the country, more women ages 25 to 34 are earning higher degrees (30 percent in 2011, from 20 percent in 2000); the work-force participation rate for German women increased from 56 percent in 1990 to 72 percent in 2012, according to World Bank estimates.

Board quotas may seem like a convenient shortcut to workplace equality, but they are not — nor are they a long-term solution. A distraction at best, they may undo women’s historic gains by suggesting that we cannot succeed on our own. Surely that’s not a legacy Ms. Merkel wants to leave behind.

Carrie Lukas is the managing director of the Independent Women’s Forum, a nonprofit organization based in Washington.