Last week’s terrorist knife attack in London reignited Britain’s political battle over crime, just as the United Kingdom heads toward a Dec. 12 general election. Prime Minister Boris Johnson and Labour Party leader Jeremy Corbyn blamed each other for justice policy failures. The attacker was out on parole from a previous conviction; he might theoretically still be in prison if, when sentenced, Johnson’s proposals had already been in place.

What are those proposals? In August, Johnson announced plans to end the U.K.’s current automatic license (parole) system for sentences of 14 or more years. Under current provisions, these prisoners are often eligible for release after half their original sentence. Many contend, however, that Conservatives, in power for the past nine years, have had plenty of time to push these reforms but failed to do so and, thus, lack credibility.

Last year, neither total crime nor violent crime increased — but there was a 7 percent increase in knife crime, though not knife homicides. According to a YouGov survey, 64 percent of the U.K. population currently believes the government handles crime poorly. Ipsos MORI’s polling finds that crime is the third most pressing issue in the country, right after Brexit and improving the National Health Service. Crime has almost doubled in salience since the last election in 2017.

When U.K. voters cast their ballots next week, which party’s criminal justice plans will they support?

The Conservative parole proposal is part of a bigger package

The parole reform proposal forms part of the broader Conservative Party agenda to increase both sentences and the use of stop and search (stop and frisk); add 20,000 new police officers; and create 10,000 additional prison spots at a cost of 2.75 billion pounds sterling ($3.6 billion). The Conservatives are also proposing increased prison rehabilitation programs, despite a former official’s recent suggestion that these make “little or no difference”.

For its part, Labour proposes prioritizing crime prevention, integrating justice with mental health and rehabilitation services and standardizing use of community sentences for those with prison terms under six months — in line with recommendations from a Conservative secretary of state for justice. Labour also wants to increase police officer hiring even higher, to 22,000 — albeit with a greater emphasis on neighborhood policing — complaining that the Conservatives removed officers during the post-financial crisis period of economic austerity. This is a difficult point for Johnson, whose party has traditionally been considered the home of “law and order” policy.

Johnson’s approach may tap into public attitudes toward crime

As part of my dissertation research, I fielded an online survey through YouGov in April, which measured the attitudes of 1,976 respondents across England, Scotland and Wales toward crime and punishment. Because the survey took place before Johnson’s parole reform announcement, it can help us see what public opinion looked like before recent events.

Overall, the results indicate Johnson’s proposals may be popular with large groups of the public. The vast majority of respondents (85.2 percent) want government to implement higher sentences for violent crime. Over a third were willing to be taxed more to direct additional resources to policing.

Further, respondents were more afraid of violent crime, and more willing to support a punitive approach to it — which Johnson may be responding to with his rhetoric about keeping “dangerous criminals off the streets”. When I asked respondents to rate the types of crime they worry about, the percentage of people who selected violent crime as their primary concern (58.8 percent) was many multiples greater than that for the next closest crime. Drug crime was the main worry for 3.7 percent of respondents, and 40.8 percent supported increasing sentences for nonviolent offenses — less than half that for increasing violent crime sentences.

In many respects, criminal justice is a partisan issue. Among the three biggest parties, Conservatives are most supportive of increasing all sentences. Interestingly, both Labour and Liberal Democrats are more willing to increase taxes to fund spending on police. This is likely because Conservatives dislike taxes more, which suggests that Johnson might have difficulty delivering his policy proposals, given existing tight budgets. 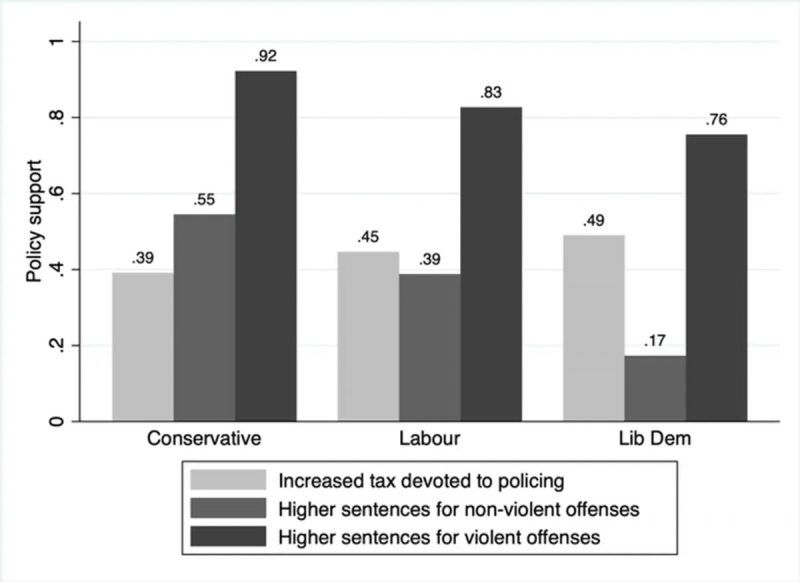 My research indicates that those who worry about crime have more punitive attitudes, while those who worry about false arrests have the opposite reaction. While fear of arrest is generally low across the country, Labour respondents were twice as likely to indicate it as a concern as Conservatives. They were also slightly more likely to fear crime but not with as high a margin as fear of arrest. In general, Labour respondents were more likely to live in regions with higher crime rates (89.9 offenses per 1,000 people in 2018) than Conservatives (83.8 offenses).

It will be hard to deliver more police and prison spots

U.K. prisons are already occupied at the 95 percent level, and prison construction is relatively slow. However, people who see the prison system as overwhelmed may be more, not less, likely to want to double down on punitive policies. When I asked respondents about their confidence that the police have sufficient resources, 11 percent agreed; 25 percent agreed that judges and prosecutors follow local sentiment. Those who had lower confidence in police resources and judges were more likely to support increased taxation for policing and longer sentences for violent crimes, respectively.

As election day nears, reports suggest Johnson is set to refocus on crime to stave off last-minute surges from Corbyn’s Labour. This analysis suggests that the public may well support Johnson’s demands for harsher sentences. However, proposed reforms that might lead to higher taxes — such as putting more officers on the street — could remain less popular, especially among Conservatives.

Elle Pfeffer (@ellepfeffer) is a doctoral candidate at the University of Oxford researching the politics of criminal justice and redistributive policy.