Is there a family of English-speaking nations, united by cultural values, liberal market economies, the common law and democracy, that is waiting to welcome Britain with open arms after it frees itself from the constraints of the European Union? Some optimists think so.

David Davis, the British government’s Brexit secretary until he left his post this week, said in a 2016 speech on the referendum: “This is an opportunity to renew our strong relationships with Commonwealth and Anglosphere countries. These parts of the world are growing faster than Europe. We share history, culture and language. We have family ties. We even share similar legal systems. The usual barriers to trade are largely absent.”

In 2013, Boris Johnson, a prominent Brexit supporter and foreign secretary until he also resigned this week, described Britain’s joining the precursor to the European Union in 1973 as when “we betrayed our relationships with Commonwealth countries such as Australia and New Zealand.”

Both departed in protest of Prime Minister Theresa May’s most recent plan for Brexit, which includes concessions to European Union rules to make trading with the bloc easier post-Brexit and which, in Mr. Johnson’s view, has “suffocated” the dream of a global Britain, trading with the wider world.

President Trump arrived in Britain on Thursday for a visit meant to “celebrate the strong business links between our two countries,” according to Downing Street. And maybe to renew kinship and ties between Britain and the United States?

Unlikely. The problem is that in British politics, the Anglosphere has always been a paradox: a politically useful idea that has never lived up to the ambitions of its advocates.

The idea of a family of English-speaking nations was useful in arguments about the rise of rival powers, like the United States, in the 19th century. It was useful when politicians were imagining, and telegraphing, the future of the British Empire between the world wars. And it was useful during the soul-searching about Britain’s place in the world that accompanied decolonization and Britain’s entry to the European Community.

Now, as the British government grapples with the fraught policy questions that leaving the union raises, the Anglosphere is a balm for those same Euroskeptics, who argue that Britain should just strike out on its own and make its own trade deals with some of the world’s leading economies, including the United States, Australia and New Zealand, as well as rising Asian powers like India.

But has the idea of the Anglosphere ever actually existed outside of the imaginations of British politicians?

The late-Victorian statesman Joseph Chamberlain tried to unite the settler dominions of the British Empire, like Canada, Australia and New Zealand, in a tariff union, but he was defeated by fierce resistance from free-traders, the City of London and working-class voters who responded to concerns that the price of food would rise as a result. 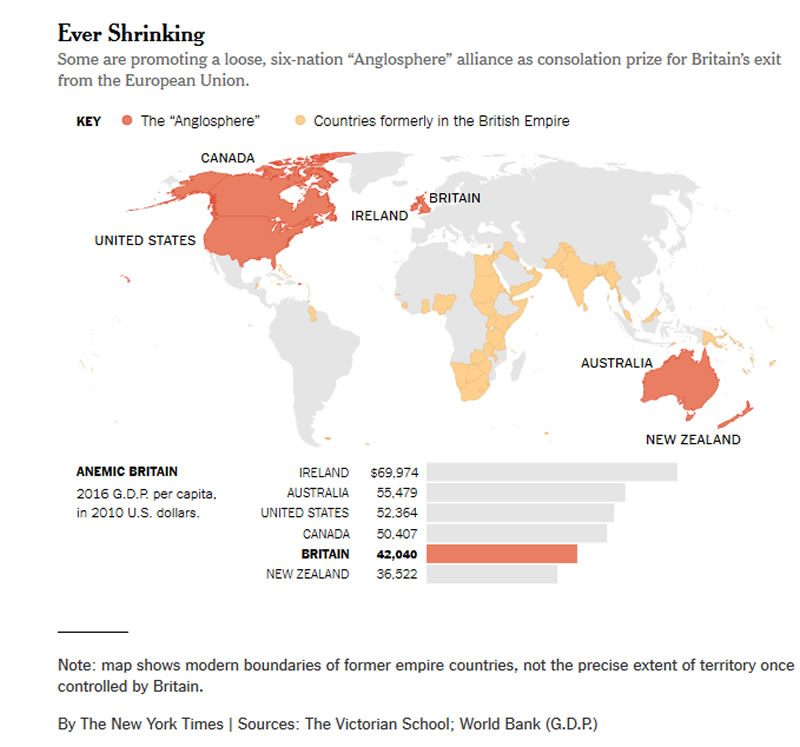 After World War II, the Conservative leader Winston Churchill famously sought to place Britain at the critical intersection of the “three majestic circles” of the British Empire and Commonwealth, the English-speaking countries of North America and a “United Europe.” But at that point, British power was already on the wane. Instead, the Cold War world was dominated by the superpowers of the United States and the Soviet Union. Churchill’s vision did not survive the changing economic and political realities of the 1950s and ’60s.

In the 1960s, the iconoclastic Conservative Enoch Powell railed against allowing subjects of the former British Empire to immigrate to Britain — a legacy of imperial overreach that he believed was endangering the culture and heritage of England. Powell thought that the only kind of national community that could prosper was one where its members share the same racial background, culture and customs. But — though he had his supporters — his attempts to prevent Commonwealth immigrants from making Britain their home was defeated by the growing diversity of multicultural Britain and the unwillingness of the Conservative Party to adopt his agenda.

Whenever anyone has tried to actually apply the idea of an Anglosphere, in its various guises, it has always collided with reality. Economic interest or politics or national security has never been enough to persuade the peoples of these different countries to enter into an Anglosphere alliance. And the current Brexit-loving advocates of a global Britain, leading the world in free trade, will meet the same fate.

President Trump may agree to a new trade deal with Britain, but it’s unlikely that Britain would decide the terms, a prospect that is fraught with political risks for the British government. Such a deal raises the specter of British voters eating chlorinated chicken and hormone-injected beef while watching the revered National Health Service being opened up to American multinationals.

For Australia and New Zealand, trade links with China and Asia are much more important than those with Britain. And Canada, as a member of Nafta, has long been oriented toward the massive American market. Security and intelligence cooperation among these states and Britain in the so-called Five Eyes group is critical, as is NATO membership, but this kind of cooperation does not require a new Anglosphere bloc.

In reality, the United States, Canada, Australia and New Zealand show no inclination to join Britain in new political and economic alliances. More likely, they would rather continue to work within the existing institutions — like the European Union and the World Trade Organization — and remain indifferent to, or just perplexed by, Britain’s calls for some kind of formalized Anglosphere alliance.

Some pomp and ceremony on this visit might improve relations between Mrs. May and Mr. Trump, which reportedly are not very warm. But it’s sensible to be skeptical that Mr. Trump will think that the Anglosphere is any kind of answer for the United States, just as it has never really been the answer in the past.

Despite this, and despite its practical shortcomings, the idea of the Anglosphere will probably endure.

The tragedy of the different national orientations that have emerged in British politics after empire — whether pro-European, Anglo-American, Anglospheric or some combination of these — is that none of them has yet been the compelling, coherent and popular answer to the country’s most important question: How should Britain find its way in the wider, modern world?

As long as that is still being asked, the Anglosphere will continue to be an answer for some of Britain’s political dreamers.

Michael Kenny and Nick Pearce are authors of Shadows of Empire: The Anglosphere in British Politics.