Bulgarian legislators are gearing up to form a new government, following the March 26 parliamentary election, the third since 2013. Five parties made it into the National Assembly, but none of them won the minimum 121 out of 240 seats to claim a majority in the unicameral legislature.

This will be Borisov's third and most challenging term as prime minister. GERB decided to partner with the United Patriots (UP), a coalition of three nationalist, far-right parties that won 27 seats.

This is the first time in Bulgaria's post-communist history that the extreme right might be included in government. Negotiations between GERB and the UP are ongoing, but the parliamentary vote to approve the cabinet is likely to take place by May 6.

Nationalists will be in government for the first time

In Bulgaria, as in Britain, the Netherlands, France, Germany and elsewhere, the election campaign was influenced by fear of migration and concerns of Russian and Turkish meddling. This year, the share of the nationalist vote decreased by 2.49 percent since the previous election . In 2014, the nationalist Patriotic Front and Ataka ran separately but overall won 11.8 percent of the vote. This time, under the label UP, these parties got 9.31 percent but became the key coalition partner.

Bulgarian and EU elites agree that the country needs a stable government as it prepares to assume the rotating, six-month presidency of the Council of the European Union on Jan. 1, 2018. Bulgaria's presidency will coincide with the decisive phase of Brexit negotiations. Government instability and another election before July 2018 could affect the smooth functioning of the presidency.

GERB — 95 seats (33.5 percent of the national vote) — Established in 2006 around Borisov's charismatic and populist leadership, GERB has become Bulgaria's main center-right party, affiliated with the European People's Party within the European Parliament. GERB has diligently pursued the economic policies recommended by Brussels but has lagged in implementing much-needed anticorruption reforms .

Bulgarian Socialist Party (BSP) — 80 seats (27.9 percent) — Led by Kornelia Ninova, the communist-successor party more than doubled its share of seats. BSP's foreign policy orientation has been friendly to Russia — but also pro-European Union. BSP is affiliated with the Party of European Socialists and the Progressive Alliance of Socialist and Democrats . However, during the 2017 election campaign, BSP adopted an increasingly euroskeptic position and called for an end to EU sanctions against Russia.

United Patriots (UP) — 27 seats (9.3 percent) — This is loose coalition of three nationalist parties: Ataka , VMRO -Bulgarian National Movement and National Front for Salvation of Bulgaria (NFSB) . They espouse anti-Turkish, pro-Russian, euroskeptic and anti-immigration views . The UP also demands increased social spending . These parties have provided legislative support for Borisov's previous two cabinets without participating in them.

Movement of Rights and Freedoms (MRF) — 26 seats (9.2 percent) — This centrist party is affiliated with the Alliance of Liberals and Democrats in the European Parliament. It represents the Turkish minority, which is 10 percent of Bulgaria's population. Since 2005, MRF has participated in two coalition governments with the BSP.

Volia — 12 seats (4.3 percent) — This party was formed in 2016 by Veselin Mareshki , a businessman who ran on a populist, nationalist, anti-immigration and pro-Russian platform. 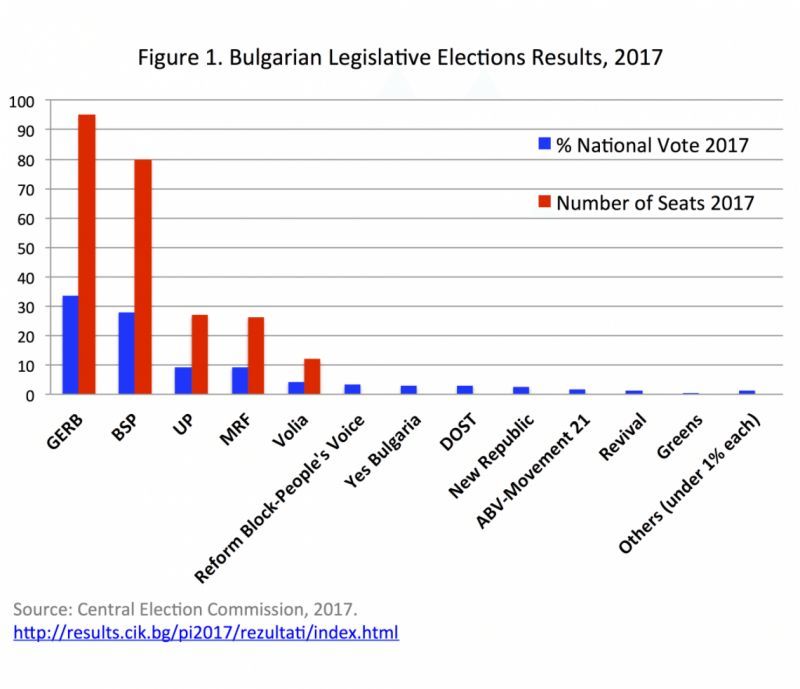 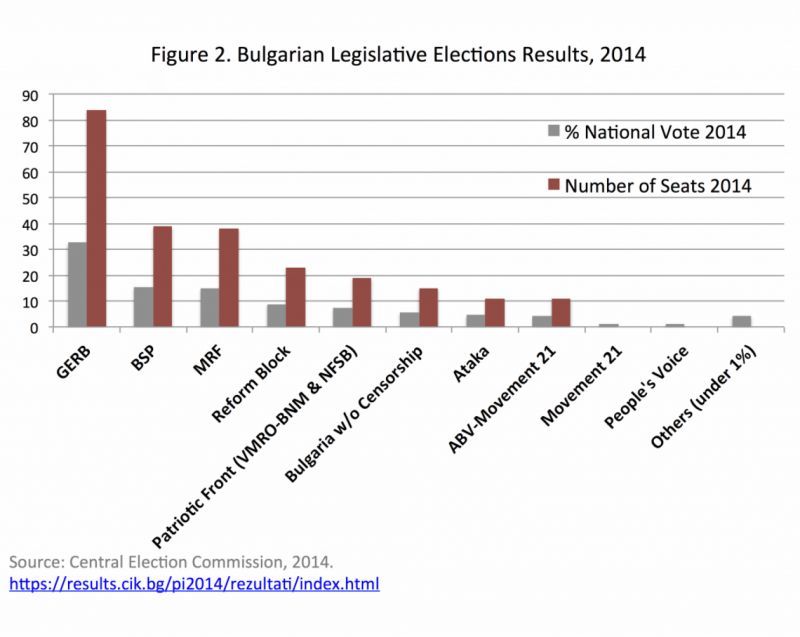 Negotiations have been surprisingly quick and smooth

The limited choice of coalition partners and the substantial policy differences between them meant GERB found it easy to reject several cabinet possibilities.

A single party minority government led by GERB (95 of 240 seats) was not an option because both the nationalist UP and the pro-Turkish MRF could cooperate with the Socialists on policy.

GERB and the BSP (95+80=175 seats) quickly ruled out a grand coalition due to major policy differences. However, the BSP may have concluded that in the long term it would be more beneficial to avoid the burden of participating in government and instead wait until the next election.

Borisov rejected the MRF's proposed coalition , which would have produced a total of 121 seats. Brussels would have welcomed the MRF's pro-EU stance but domestically, reliance on the pro-Turkish MRF could alienate some GERB voters and push the UP toward the BSP.

A coalition between GERB, UP and Volia — 134 total seats — also was rejected, possibly due to objections by one of the UP leaders. Borisov refused to rely on Volia's legislative support for a GERB/UP cabinet without Volia bearing the responsibility of participating in the government.

That leaves the UP, the only parliamentary group right of the center that can provide GERB with a majority (122 total seats). GERB and the UP have stated that they plan to govern together for the full four-year term , despite substantial policy differences.

What does this mean for Bulgaria and the EU?

Borisov enjoys the strong support of the European People's Party (EPP). In 2014, the EPP cautioned Borisov not to include the extreme right in the cabinet. Today, Europe seems to prefer a stable, pro-European government led by GERB, even one including the nationalists, to a pro-Russian, Socialist-led one .

Bulgaria is likely to remain pro-EU and pro-NATO . Both GERB and the UP list joining the Schengen Area — and being part of the EU's borderless zone — as a top priority. Similarly, joining the Eurozone is a shared goal. Currently, Bulgaria is one of seven EU countries that doesn't use the euro.

However, Bulgaria is likely to adopt a harsher stance on immigration than in the past. The UP wants changes to the Dublin Regulation on refugees, which makes EU states responsible for the refugees that claim asylum within their borders. The fence on the Bulgarian-Turkish border is likely to be extended.

GERB may have to rein in its anticipated coalition partner. It remains to be seen whether governing will force the UP to moderate its nationalist position and whether it will continue to seek friendlier policies toward Russia.

As GERB and the UP disagree on important policies, implementing substantive economic and political changes may be difficult, especially anticorruption measures and changes to the judiciary. This could further alienate moderate center-right voters and ultimately destabilize the cabinet.