I have spent my entire life trying to explain to people why I speak French, why I grew up speaking French with my father and grandparents, why at least half of my phone calls involve some shouting in French. “Are you French?” they’ll ask. “Sort of” is usually the best I can do.

My confusing family history and the reason I speak French begins in the 1860s, when Adolphe Crémieux, a Frenchman who would go on to become minister of justice, founded a Jewish organization called the Alliance Israélite Universelle and started what it called a “civilizing mission” aimed at teaching Middle Eastern Jews how to speak French and inducting them into French culture. The Alliance opened schools in Turkey and across the Maghreb, and by 1900 had almost 30,000 Jews in its tutelage.

The mission’s aftershock was that foreign Jews felt French even though some might never even step foot in Europe. For French-speaking Jews around the world, the Alliance promised something as powerful and as compelling as the American dream. 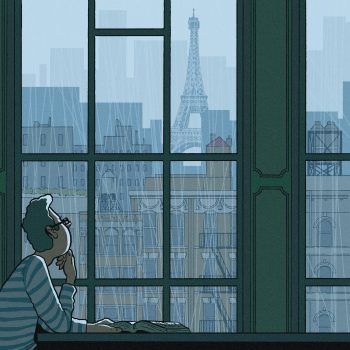 I am the direct result of this mission. My grandfather was born to a French-speaking family in Constantinople, before moving to the cosmopolitan city of Alexandria, where Alliance-educated Jews felt at home because French was the lingua franca. He met my grandmother — a Syrian-Egyptian Jew who, despite being deaf, also grew up speaking French in Alexandria. My grandmother lived in France for only a few years as a child in order to learn lip reading and was given a large medal by the French government for her success. My father, who grew up in Alexandria, spoke French at home and on the street, and until he was a teenager always assumed that he was not, in fact, Egyptian, but French.

But it wasn’t just language that the Alliance gave to Jews. They read all of French literature and studied the history of France as one studies their own national culture and history. As a child in Alexandria my father read from a book called “Ma première histoire de France,” “My First History of France,” a book that he would eventually pass on me.

I inherited this French dream. Though my siblings and I were born and raised in the United States, my father made sure we spoke the family language. I feel most at home when I am in France, where I get to speak the language that I dream in. Like a sap, I get choked up when they sing “La Marseillaise” in “Casablanca.”

But things are not so dreamy for Jews today in France. The country is struggling to maintain and protect its large Jewish population, the third largest in the world, which has been dwindling precipitously thanks to the wave of anti-Semitism that has gripped the country over the past decade. In 2015 — the year of the Charlie Hebdo attack — 8,000 Jews left France and headed for Israel.

My grandfather made a go at living in Paris in the 1960s, but found himself an outsider in a country still reeling from a war of roundups and deportations. This broke his heart, for he too felt that Paris was his real home.

France failed to make good for my grandfather on the promissory cultural note of the Alliance Israélite Universelle. The organization’s purpose was to lift Jews out of their benighted surroundings and offer them the tools to make a go at life in Europe. It was the promise of a country that took pride in being more civilized than the ones that would eventually expel all of their Jewish populations.

Today such distinction feels more blurred and more difficult to defend than at any point since World War II.

What hurts most about this realization is that it directly contradicts what Jews like me feel must also necessarily be true: France is our home, as if somewhere in the universe there is a real France, and the one in Europe is just a facsimile that keeps falling off the anti-Semitism wagon.

French-speaking Jews may have celebrated this year when Emmanuel Macron’s party, La République En Marche!, defeated the frighteningly far-right and anti-Semitic National Front, but this supposedly new France has done nothing to curb its Jewish problem. Every year in France Jewish storefronts are vandalized, including arson in kosher supermarkets this past week.

The general feeling of unrest is not unlike the one felt over 100 years ago during the Dreyfus Affair, when it became clear to many that Jewish life in France was ultimately unsustainable. For many, the situation has started feeling untenable again today. Anti-Semitism, as it turns out, is a flat circle.

And yet, despite all the betrayal and heartbreak, I cannot bring myself to renounce France, as if after more than a century of love for this country, the love itself has become part of my genome. Generations removed from the work of the Alliance, its effects continue to exist in me.

I feel as ridiculous admitting that I am not French as I do saying that I am. I know all the transfer points of the Paris Metro. Like my father, I studied French literature at university. My favorite days in New York are those when it rains, because on those days the city reminds me of Paris.

I cannot resolve the idea that the place where I feel that I belong wants nothing to do with me. I struggle to accept the terrible truth, which is that many of my fellow Jews in France are feeling today those early warning tremors of disaster felt by French Jews in the early 1900s and the 1930s. I tell myself that in 30 years I’ll be back home, and my kids will be sitting and chatting under the heat lamps at cafes and picking up terrible premature smoking habits, when really I know that in that time there will probably no longer be any Jews left in France at all. But like any good French person, I just shrug one of those inscrutable shrugs and say something like “C’est de la politique.” Politics, right?

Suspended in a strange gray space of muddled allegiances, like my grandfather, I realize that though I may feel French and though I want my children to grow up speaking French, the France my family dreamed of no longer exists — and maybe never did.

In his final days in New York, my grandfather and I listened to a lot of French music together. But the voice that meant most to him was that of a Jewish Egyptian singer, Georges Moustaki, who moved to Paris in the 1950s and wrote songs for Edith Piaf, eventually becoming an icon of French music. It was as if through this music my grandfather could vicariously live out his dream of being French — really, truly French.

Today that musician is buried in Père Lachaise — France’s most storied cemetery and final resting ground of its greatest icons. It is a true success story, but not all of us can be so lucky. My grandfather is buried in Westchester, a place he’d never even heard of. And so when it is my turn, where will I be buried?