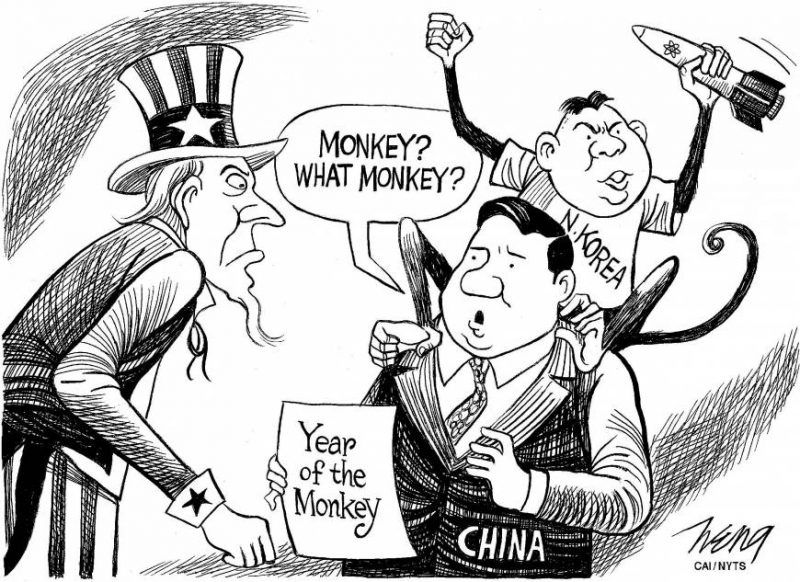 North Korea conducted a rocket launch on Feb. 7, a day before the beginning of the Feb. 8-25 time frame it had originally provided for the launch. With diplomats from around the world scrambling to come up with a unified response, South Korea and the United States have already decided on one bilateral move: formally beginning talks over the deployment of the U.S. Terminal High Altitude Area Defense (THAAD) system. That, in turn, has reignited hand-wringing in China about the threat THAAD poses to Chinese national security.

In fact, official statements from the Chinese Foreign Ministry on THAAD deployment were more severe than its statements responding to the North Korean launch. Spokesperson Hua Chunying said China had “noted” and “regrets” the launch; meanwhile, in a separate statement, Hua said China was “deeply concerned” about the start of THAAD talks. Deploying THAAD in South Korea “will not help maintain regional peace and stability, nor will it lead to a proper settlement of the current situation,” Hua cautioned.

China’s Spring Festival began on Monday, and with most of the country on holiday, official responses will be muted for the next week. However, Chinese state-owned media is filling in the gap with its own arguments against THAAD deployment, which were raised repeatedly last year.

Beijing believes that deploying THAAD in neighboring South Korea means the system would be aimed at China as much as at North Korea, constraining China’s military options in the event of a conflict. Its repeated response to the THAAD question has been, as Hua said last Saturday, that “no country shall undermine other countries’ security interests while pursuing its own.”

That argument — effectively that South Korea should sacrifice its own national security for China’s — didn’t sit well with South Korean officials; last March, a spokesperson for South Korea’s Ministry of Defense said pointedly that “a neighboring country … should not try to influence our security policy.”

This week, commentaries in Chinese media are taking a slightly different approach to criticizing THAAD deployment. An English-language commentary published online by Xinhua takes the position that deploying THAAD “does more harm than good.”

“The likely THAAD deployment … is detrimental to the efforts to solve the nuclear issue on the Korean Peninsula as it is likely to trigger an arms race in the troubled region,” authors Hu Yao and Zhong Cuihua argue.

The piece argues that “hostile U.S. policies” are “a major contributor to the regional predicament,” and thus that THAAD deployment would only spark “a vicious cycle on the Korean Peninsula.” Instead, Hu and Zhong argue for “sincere talks and well-intended negotiations.”

Global Times offered a similar argument in its piece on the THAAD talks, saying the announcement “further complicates” the security situation in Northeast Asia. The piece claims that “nearly all military experts” believe THAAD is aimed just as much at China as it is at North Korea, “and thereby constitutes a potential harm to China’s security” (the piece dismissed Seoul’s claims to the contrary as “wan”).

The Global Times argues that the current rush toward THAAD, sparked by North Korea’s long-range rocket test, lacks strategic foresight: Seoul is “taking an impetuous action for the sake of its own security, without thinking about what further strategic effects it will cause and what is means over the long term.” Like Xinhua (and China’s Foreign Ministry), Global Times argues that THAAD deployment would backfire by making the Korean Peninsula more unstable.

The article also warns that, if things on the Korean Peninsula do get out of hand, China will first be concerned with taking care of itself — by making “adequate military arrangement” to counter THAAD (the Global Times suggests both increasing the number of Chinese missiles and improving their ability to evade defense systems).

Meanwhile, China Youth Daily, in an article published before North Korea’s rocket launch, takes that logic a step farther. Author Li Dunqiu, a Korean studies scholar at Zhejiang University, argues that, by deploying THAAD on its soil, South Korea would be “hijacked” by the U.S. “rebalance to Asia” strategy. In other words, THAAD really benefits the U.S., with Seoul acting as an unwitting pawn.

Li begins by pointing out all South Korea stands to lose by deploying THAAD and angering China, noting that in the fourth quarter of 2015, South Korea passed Japan for the first time to become China’s second-largest trading partner. Li suggests, as Chinese scholars often do, that the Cold War-era alliance with the U.S. might no longer be in South Korea’s best interests.

In fact, Li makes the claim that South Korea doesn’t need to worry all that much about the North, saying that the Korean Peninsula doesn’t have the “soil” necessary to spark war. With that context in mind, the article goes on to say Seoul is excessively reliant on the U.S., and thus has been “hijacked” by U.S. strategy. “America’s Korean policy has never been designed for South Korean interests, but is one link in its global strategy,” Li argues. “Right now, it serves the ‘rebalance to Asia’ strategy.”

Li’s piece goes the farthest in arguing against THAAD; instead of dwelling on the threat to China (as the Global Times did), Li wants to make the case against the missile defense system solely from South Korea’s perspective. But in the wake of another nuclear test and rocket launch by Pyongyang, Li’s argument that Seoul shouldn’t worry too much about Pyongyang — based on little more than quotes from North Korea media — isn’t likely to convince anyone responsible for South Korea’s defense.

Meanwhile, none of the responses from China offer much in the way of constructive suggestions on how South Korea can ensure its own security without deploying THAAD — especially given that Beijing isn’t all that interested in punishing North Korea for its continued defiance of United Nations sanctions.

Shannon Tiezzi is managing editor at The Diplomat. Her main focus is on China, and she writes on China’s foreign relations, domestic politics and economy. © 2016, The Diplomat Distributed by Tribune Content Agency.