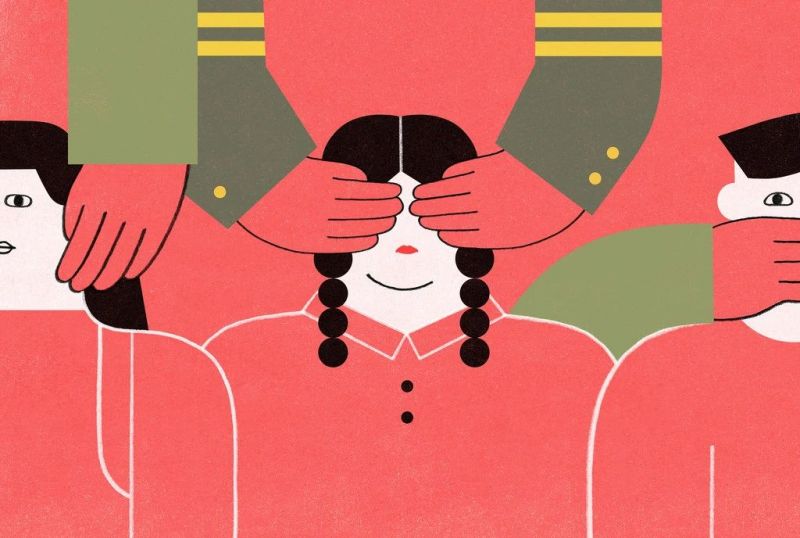 In early November, when Beijing played host to the Asia-Pacific Economic Cooperation meeting, city officials closed hundreds of factories and forced millions of vehicles off the roads to clear the soupy gray smog that normally blankets the sky. But one day the pollution level soared, with data from the United States Embassy showing an index reading six times the World Health Organization’s safe daily limit. Seeking their last course of action, the Chinese officials summarily removed the American statistics from smartphone apps and Chinese websites.

Reading the news while on my university campus in the United States, I joked with friends in Beijing that it had reminded me of a proverb we learned in elementary school that tells the story of a man who tries to steal a large copper bell from a house. To carry it away, he decided to break it into pieces with a hammer, but feared the noise might alarm its owner. So he plugged his ears, believing it would muffle the sound for other people.

The element of self-deception in China’s attempt to control information has always invited mocking skepticism. In 2000 President Bill Clinton famously compared Chinese Internet censorship to “trying to nail Jell-O to the wall.” But as the ensuing years have proved, Chinese censors’ commitment to this seemingly hopeless enterprise has created a dire reality that imprisons each of its citizens.

Last year, several non-Chinese social media apps, including Instagram and Line, fell under the censors’ blade, joining a growing list of foreign services, such as Facebook and Twitter, that are inaccessible in China. Google, having long been in the crosshairs of the Chinese authorities, saw its Gmail service in China disrupted in late December. In recent weeks, the authorities have disabled popular virtual private networks — technical loopholes that many residents had used to access online content beyond the Great Firewall.

Returning to China from abroad during school vacations increasingly feels like stepping into an alternate universe. Internet tools that my peers across the world use to stay connected are replaced by their heavily monitored Chinese versions, where benign criticisms of the Communist Party can lead to police interrogation or jail time.

Mainstream media and publishing are under similar assault. Gone are the days when industry insiders summarized taboo topics with the “three Ts” — Tiananmen, Tibet and Taiwan. My mother, an editor at a state publishing house, has in the past few months had several book projects — on subjects from Buddhism to homosexuality, which used to bypass censors with relative ease — rejected by higher-ups without explanation. The expurgation does not stop at the politically sensitive. A television drama on China’s first female emperor was recently pulled simply for featuring revealing costumes.

The often-farcical appearance of the censorship rules has on occasion galvanized individuals into making a demand for transparency but more often has only served to alienate them by depriving them of channels for communication.

The specifics of the ongoing ethnic violence in the western region of Xinjiang, which resulted in hundreds of deaths last year, may never be known to outsiders due to government restrictions on media reporting of the subject. The pro-democracy protest in Hong Kong received only sketchy coverage on the mainland, where the protesters were called “radical elements” instigated by “foreign anti-China forces.” Other groups on the mainland, from rural petitioners to liberal intellectuals, are also suffering a shrinking platform for their voices.

Such monopoly over information has bred misunderstanding among the people. Few Chinese I have met, for example, are willing to consider that the party’s oppressive policies in Xinjiang may be responsible for the recent bloodshed. Rather, the vast majority maintains that the attacks are simply the deeds of “savage Uighurs brainwashed by extremist thoughts,” as a taxi driver in Urumqi recently told me. Similarly, many mainlanders were quick to question the Hong Kong protesters’ motives or laugh at their naïveté, while remaining ignorant about their demands.

Early last year, after decades of silence, a group of elderly women that were former Red Guards at an elite Beijing high school made a public apology for their role in one of the most infamous incidents during the Cultural Revolution: the death of their school’s vice principal as a result of mass beating. The wider discussion it triggered online was quickly shut down by authorities, but the brief outburst of public comments contained little forgiveness.

Without a platform for rational dialogue that helps make sense of the deeper political cause of the tragedy, the discourse devolved into ad hominem attacks fixating on the culpability of individuals. In a recent meeting with these women, one asked me about my friends’ opinions toward their apology. She became quiet when I told her most of my peers are oblivious of the incident.

The fragmentation of society, in which individuals sit in solitary confinement with their hopes and complaints, makes a mockery of the buoyant description of “the motherland’s ethnic and cultural unity” that filled my high school textbook. Chinese leaders might believe that isolating grievances helps them contain the society-wide discontent. In reality, however, it only leads to a vacuum of trust that ultimately undermines the Communist Party’s own credibility.

Increasingly, the party’s aggressive censorship strategy betrays a mounting anxiety over its ability to manage popular discontent. Behind the grandiose discourse of the “Chinese Dream” in newspaper editorials and political meetings are talks of fear of a post- Soviet-style color revolution.

But even as Chinese leaders are determined to heed the lessons of the breakup of the Soviet Union when a loosening of media control in the late 1980s ushered in a flood of destabilizing dissent, they seem no less apprehensive about the risk of their restrictive strategy backfiring.

In the aftermath of a New Year’s Eve stampede in Shanghai that killed 36 people, censors moved swiftly to limit public discussion. Relatives of the victims were accompanied by plainclothes police at the site of mourning: Grieving, too, has become subversive, some Chinese commentators wryly observed on social media. The authorities worry that the widespread sympathy it garners might fuel public anger toward the government.

The man who covers his ears while stealing the bell now seems to be quickening his steps. Rather than hoping others will not hear him, he may instead be too busy scanning the road, praying not to trip over in his hasty escape.

Helen Gao, a native of Beijing, is a master’s student in East Asian Studies at Harvard.