In my three-decade career with Britain’s Secret Intelligence Service, China was never seen as a major threat.

If we lost sleep at night, it was over more immediate challenges such as Soviet expansionism and transnational terrorism. China’s halting emergence from the chaotic Mao Zedong era and its international isolation after Chinese soldiers crushed pro-democracy demonstrations at Tiananmen Square in 1989 made it seem like an insular backwater. 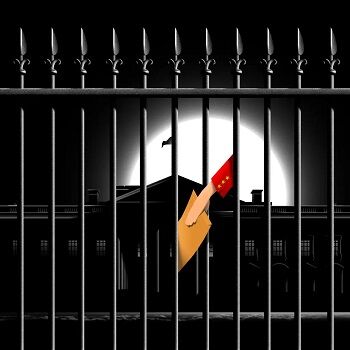 The U.S. and British intelligence chiefs — the F.B.I. director, Christopher Wray, and the MI5 director general, Ken McCallum — signaled rising concern over this with an unprecedented joint news conference in July to  warn of, as Mr. Wray put it, a “breathtaking” Chinese effort to steal technology and economic intelligence and to influence foreign politics in Beijing’s favor. The pace was quickening, they said, with the number of MI5 investigations into suspected Chinese activity having increased sevenfold since 2018.

The culture of the Chinese Communist Party has always had a clandestine nature. But as the party has become an even more dominant force in China since President Xi Jinping took power a decade ago, this has metastasized in state institutions. China can best be described as an intelligence state. The party views the business of acquiring and protecting secrets as an all-of-nation undertaking, to the point that  rewards are offered to citizens for identifying possible spies and even  schoolchildren are taught to recognize threats.

The West cannot fight fire with fire. Mobilizing government, society and economic and academic systems around competition with foreign foes the way China does would betray Western values. But leaders of democracies need to internalize the sea change that has taken place in China and ensure that engagement with Beijing is tempered by a hardheaded sense of reality.

The last state intelligence threat of comparable magnitude was posed by the Soviets. But the Soviet Union was isolated and impoverished. China’s successful economy, on the other hand, is a key engine of global growth, vastly increasing Beijing’s reach.

Barely visible on the world stage 30 years ago, China’s intelligence agencies are now powerful and well resourced. They are adept at exploiting the vulnerabilities of open societies and growing dependence on China’s economy to collect vast volumes of intelligence and data. Much of this takes place in the cyber domain, such as the 2015  hack of the U.S. Office of Personnel Management, in which sensitive data on millions of federal employees was stolen. Chinese intelligence operatives also are present in state-owned  enterprises, state  media organizations and embassies and consulates.  China’s consulate in Houston was closed by the Trump administration in 2020 after it served as a national hub for collecting high-tech intelligence.

China’s  Intelligence Law which was enacted in 2017 required its citizens to assist intelligence agencies. But this legislation simply formalized a situation that had already been the norm. The wider China challenge comes from organizations and actors engaged in activities that may not conform to normal concepts of espionage.

Much of this is organized by the  United Front Work Department, a party organization that seeks to co-opt  well-placed members of Chinese diaspora communities — and whose scope has been  expanded under Mr. Xi. China also endeavors to entice other Western citizens. A textbook case, exposed this year, involved a  British politician whose office received substantial funding from an ethnic Chinese lawyer who thereby gained access to the British political establishment. One  Chinese approach is to patiently cultivate relationships with politicians at the city or community level who show potential to rise to even higher office. Another is known as  elite capture, in which influential Western corporate or government figures are offered lucrative sinecures or business opportunities in return for advocating policies that jibe with Chinese interests.

For China, this work is about survival. Technology and business intelligence must be acquired to keep China’s economy growing fast enough to prevent social instability. Mr. Xi has stressed the need to adopt  “asymmetrical” means to catch up to the West technologically.

China may be ahead of the game now, but there are tools that Western intelligence and security agencies can bring into play, including providing staff members with the requisite language skills and an awareness of China and the workings of the Chinese Communist Party. But they need help.

New and more effective legislation that is attuned to the changing dynamics is vital. Britain is taking a step in the right direction. It looks set to enact a  national security bill that would broaden the definition of espionage and take measures to create, as the Home Office put it, “a more challenging operating environment” for those acting as agents for foreign interests. Australia enacted similar  legislation in 2018 to curb foreign covert political influence after concerns emerged over Chinese activity.

Countering Beijing poses a difficult balancing act, especially in countries with large Chinese diaspora populations. A case in point was the F.B.I.’s program for preventing theft of economic and scientific intelligence from U.S. universities, started by the Trump administration under the China Initiative. The program had a  chilling effect on ethnic Chinese scientists and engineers who felt they were unjustly victimized. It was  terminated this year.

Western countries shouldn’t be afraid to make bold moves. Actions like Britain’s  mass expulsion of Soviet intelligence officers in 1971 after a surge of spying activity rarely, if ever, affect wider relations. Nor should the impact of espionage and subversion be overstated. The Soviet Union lost the Cold War not because of its intelligence operations — which were good — but because of the failure of its governing ideals.

The same may prove true with China. Western policymakers and intelligence services must innovate and adapt. But they also must ensure that strategies they employ honor the ideals of freedom, openness and lawfulness that pose the greatest threat to the Chinese party-state.

Nigel Inkster is a former director of operations and intelligence for Britain’s Secret Intelligence Service, from which he retired in 2006. He is the senior adviser for cybersecurity and China at the International Institute for Strategic Studies.