I didn’t think much of it when the police took away five of my friends and fellow feminist activists in early March for planning a protest against sexual harassment on public transportation in Beijing. Similar arrests had happened to all of us before, and we were always let go after a few hours of interrogation. But when my friends didn’t come home that evening or the following day, I realized it was different this time. Given that I had planned and participated in many activities with them, I worried that I could be the next target and be forced to provide “evidence” against my friends. So, I fled Beijing and went into hiding.

The arrests sparked nationwide online protests and petitions by young people, especially university students. We hadn’t expected that the international community would also react so strongly: Human rights organizations and Western leaders, such as Hillary Clinton, voiced their condemnation. The domestic and international pressure led to my friends’ release after a month of detention. Of course, it didn’t help that the police also failed to gather any concrete criminal evidence against them.

I’ve since returned to Beijing, but this incident prompted me to examine my own activism and question whether I have made the right choices. When I was growing up in the 1990s in Sichuan Province, I found many cultural traditions and practices puzzling. At home, I addressed my mothers’ parents as “waipo” and “waigong,” or “outside grandma” and “outside grandpa,” because I was told that my father’s family mattered more. In school, my teachers held higher academic expectations for boys than they did for girls because they believed boys were smarter than girls. 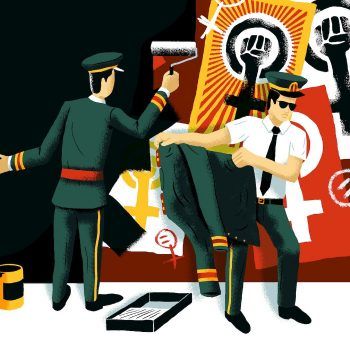 While applying for college, many universities openly excluded girls from majors such as marine engineering and geological exploration, and lowered admissions standards for boys who chose to study foreign languages and broadcast journalism, which historically attract girls. I constantly saw want ads that either excluded women or specified that women applicants needed to be tall and attractive.

Many took this entrenched discrimination for granted, but I didn’t. As a sophomore in college, I became interested in feminism and began reading Simone de Beauvoir’s “The Second Sex” and other famous feminist works. I enjoyed watching foreign movies that depicted women championing social justice and gender equality. Like a nearsighted person with new glasses, I began to see clearly, and many of the things that puzzled me growing up were explained by feminism.

In the fall of 2011, I met Li Tingting, one of the arrested activists. Ms. Li, who had campaigned for women’s issues for several years, introduced me to a circle of like-minded women and a whole new world of activism.

My friends, most of whom were born in the 1980s and ’90s, and I have had a good education and we could easily find “nice” and “stable” jobs. Our parents have always exhorted us to live normal lives and not to poke our noses into things that don’t concern us. But instead of pursuing lucrative corporate positions, getting married and having children, we choose to become full-time women’s rights campaigners.

In China today, women face widespread discrimination at work; many companies refuse to even hire women. Sexual harassment is commonplace. Domestic violence is pervasive. According to a 2013 multi-country study conducted by the United Nations, more than 50 percent of Chinese men have physically or sexually abused their partners.

Some friends advise us to advance our cause by “quietly” lobbying the government or by pushing for changes within the system by becoming government employees. But in a country where the government still exerts tight control over ideology, those inside the system rarely find the courage to speak up.

Many women before us have taken the accommodationist route, but little has changed. Strong public pressure is necessary. We cannot afford to go about our campaign quietly.

Since public protests and demonstrations are banned, we rely on a unique platform — performance art — to challenge social conditions. We’ve taken our message to the streets and subways and fought for a safe public space for women.

The first public performance project I took part in targeted rampant domestic violence. Donning bridal gowns splattered with fake blood, we marched down a crowded Beijing shopping street, carrying signs that read “Love is not an excuse for violence” and urged residents to be vigilant against domestic abuse. Through the “Occupy Men’s Toilet” campaign, we called attention to a more mundane issue: the unfair ratio of male to female toilet stalls in public places. In another action, we shaved our heads to protest discrimination in college admissions.

And last year, I trekked more than 1,200 miles, crossing 55 cities to raise awareness about the high rates of child sex-abuse in China’s schools. The government, rather than fixing the system and punishing the perpetrators, simply blames the victims.

Our presence on the streets and in the media appears to be influencing decision-making. In recent years, several universities abolished their discriminatory admission policies. Beijing is said to be building new toilets for women, and some universities are converting toilets to increase the ratio for women. The top legislature is considering a domestic violence law.

Our actions have irked some chauvinists, who have threatened and harassed us on social media. The police have warned us against the evil influence of “hostile forces” in the West and began monitoring our phones and email.

The arrest of my five friends, which occurred in the days before International Women’s Day, showed that the government has become scared of a group of young women because of our ability to mobilize a large network of supporters. They were incarcerated on charges of “picking quarrels and provoking trouble,” even though the event was still in the planning stage and our past activities were carried out peacefully. The police punished my friends to intimidate other social and political activists.

In the near future, even though we may have to adjust our strategies to cope with this tough environment, we’ll never give up. We hope the international community will not either.

Feminism was never a taboo topic in China because our messages were consistent with those of the government, which calls itself an advocate of women’s rights. But all that changed with the arrest of what the media dubbed the “Feminist Five.” In an unexpected way, the police helped create more public interest in feminism in China.

Xiao Meili is a Chinese activist for women’s rights. This article was translated by Wenguang Huang from the Chinese.