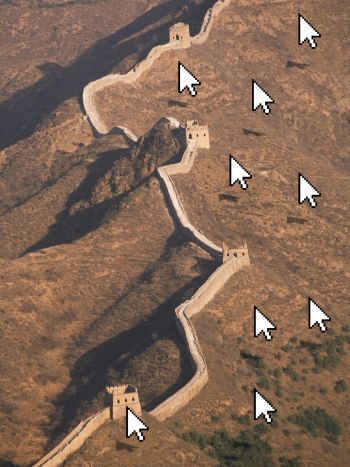 As China and the United States engage in high-level negotiations over a possible trade deal, it’s puzzling to see what’s been left off the table: the Chinese internet market. China blocks or hinders nearly every important foreign competitor online, including Google, Facebook, Wikipedia in Chinese, Pinterest, Line (the major Japanese messaging company), Reddit and The New York Times. Even Peppa Pig, a British cartoon character and internet video sensation, has been censored on and off; an editorial in the Communist Party’s official People’s Daily newspaper once warned that she could “destroy children’s youth.”

China has long defended its censorship as a political matter, a legitimate attempt to protect citizens from what the government regards as “harmful information,” including material that “spreads unhealthy lifestyles and pop culture.” But you don’t need to be a trade theorist to realize that the censorship is also an extremely effective barrier to international trade. The global internet economy is worth at least $8 trillion and growing, yet the Trump administration has focused chiefly on manufacturing, technology transfers and agriculture, and does not seem to have pressed for concessions on this issue.

Sheltered from American, Japanese and European competition, Chinese internet businesses have grown enormously over the past decade. Nine of the world’s 20 largest internet firms, by market value, are now Chinese. Some of this growth reflects the skill and innovation of Chinese engineers, a vibrant start-up culture and the success of Chinese business in catering to local tastes. But it’s hard to believe that this has been unaided by censorship.

And the barriers to foreign competition have more than just economic effects. Without any better options, Chinese users are forced to put up with companies like Tencent, which owns the private messaging app WeChat, and the online payment company Ant Financial, whose privacy violations are, amazingly, even more troubling than those of Facebook and Cambridge Analytica. By tolerating Chinese censorship, the United States encourages other countries to do the same.

When it joined the World Trade Organization in 2001, China agreed to a broad liberalization of trade in services, including data processing and telecommunications. China’s internet policies must be understood as a violation of these commitments. China will presumably counter that its internet policies are “necessary to protect public morals or to maintain public order,” invoking the relevant exception to the World Trade Organization’s rules. But while that exception might justify bans on gambling sites or even Peppa Pig, in the case of most of China’s internet barriers the real purpose seems to be the protection of homegrown business interests.

Why is the United States not demanding change? It’s not as if we lack leverage. Chinese firms like Tencent and the online retailer JD.com have aggressively pursued operations in the United States, seeking to take advantage of our open internet and open market. The Office of the United States Trade Representative even cited Chinese internet blocking as a trade barrier in 2016. Why allow a country to do business here if it won’t let us do business there? The basic principle of trade policy is reciprocity: Lower your barriers and we’ll lower ours. When it comes to the internet economy, the United States has unilaterally disarmed and is being played for a fool.

Particularly baffling is the attitude of the major American internet firms, the victims of China’s internet trade policy, whose strategy has largely been one of appeasement. Google did retreat from the Chinese market in 2010 because of concerns about censorship and industrial espionage, and it did complain for a while about Chinese obstructions. Yet last year we learned that Google was effectively giving up the fight, building a censored search engine for the Chinese market and begging for access.

Also disappointing has been Facebook’s approach. Even though Facebook has been banned in China for years, Mark Zuckerberg, its chief executive, has made embarrassing efforts to ingratiate himself with China’s president, Xi Jinping. (At one point gossip pages even reported that Mr. Zuckerberg asked, in vain, for Mr. Xi to give an honorary Chinese name to his unborn child; Mr. Zuckerberg denied that this happened.)

Appeasement does not make effective foreign policy or trade policy. The United States, with the world’s largest economy and its most important internet sector, should be negotiating from a position of strength. If the Trump administration wants to be tough with China on trade, it should demand meaningful access to the Chinese internet market, on pain of denial of access to American markets for Chinese firms.

Tim Wu is a law professor at Columbia, a contributing opinion writer and the author of The Curse of Bigness: Antitrust in the New Gilded Age.