In this year of covid-19, the ability of societies to work collectively to respond to the pandemic has taken center stage. In fact, popular compliance with public health measures may be one reason for Africa’s relatively low coronavirus infection and death rates.

Analysts study social bonds precisely because they believe that cohesive societies — marked by strong positive relationships across social groups, and between social groups and the government — will be more capable of solving shared problems and promoting well-being and development.

How strong or weak are social bonds in Africa? Scholars have long studied ethnic division on the continent and its implications for political and military conflict. And the media tends to portray Africa as blighted by conflict and division.

What is the reality? Do citizens of African countries share a sense of common identity and national purpose that can bring them together to serve collective goals, as some recent experiences fighting the coronavirus pandemic suggest? Or are they, as some stereotypes suggest, riven by cleavages and distrust that thwart the pursuit of the public good?

New data from Afrobarometer surveys in 2019 and early 2020 offer some insights. Across 18 African countries, general trust in fellow citizens is exceedingly low, and the experience of discrimination, especially unfair treatment based on economic status, is relatively widespread. Yet the surveys also provide clear evidence that most Africans appreciate diversity and adhere to overarching national identities, which may be key strengths in facing both everyday challenges and crises such as the current pandemic.

Though cautious of trusting others, Africans embrace tolerance

When asked to say whether “most people can be trusted” or “you must be very careful in dealing with people,” a mere 12 percent of respondents express trust in others, while 87 percent recommend caution.

But “trust” writ large may be a fairly high bar in many societies, and other indicators of intergroup relationships — such as tolerance, acceptance or mutual respect on the one hand, or rejection, bias and discrimination on the other — may be equally relevant. 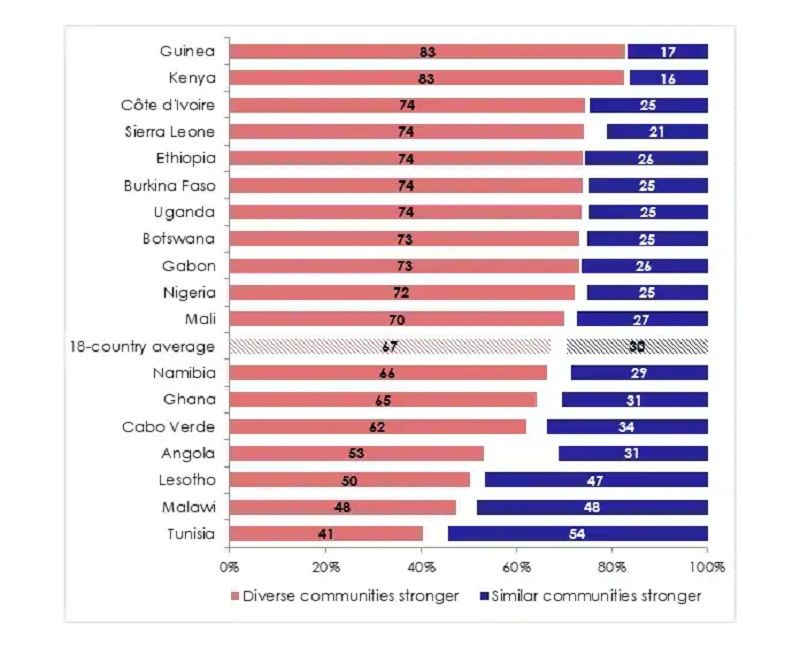 And some of these indicators paint a substantially different picture. For example, Africans appear to embrace diversity both in the abstract and in their own neighborhoods. When asked whether communities are stronger when they are diverse or when they are homogeneous, two-thirds (67 percent) of respondents identify diversity as a source of strength, including majorities in all but two countries. More than 8 in 10 Guineans (83 percent) and Kenyans (83 percent) agree (see Figure 1).

Majorities also say they would welcome having people of different ethnicities (62 percent), religions (60 percent), nationalities (52 percent) and political allegiances (51 percent) as neighbors, and another 3 in 10 say they would not care one way or the other (see Figure 2). This acceptance does not extend to gay Africans, who continue to face high levels of intolerance in many countries.

A sense of belonging?

In addition to welcoming most “others” into their communities, a majority of Africans see themselves as part of a larger national collective. Nearly two-thirds (63 percent) say there is more that unites than divides their country as one people. This is the majority view in all surveyed countries except Lesotho (48 percent), Malawi (47 percent) and Gabon (43 percent).

Many Africans have experienced discrimination

At the same time, many Africans have personal experience of discrimination at the hands of fellow citizens or feel that their ethnic, religious or economic group faces discrimination from the government. While conventional wisdom has focused on ethnicity as the most critical division within many African societies, these findings reveal that economic status is the most common basis of discrimination. One in three respondents (34 percent) report being treated unfairly by fellow citizens based on their economic status within the past year, while 22 percent and 16 percent, respectively, experienced unfair treatment because of their ethnicity and their religion (see Figure 3).

Similarly, nearly half (47 percent) say the government treats “people like them” unfairly because of their economic status, while 34 percent say their ethnic group experiences unfair treatment by the government.

Nigerians report the most widespread problems with discrimination across all categories. Malawians report remarkably high levels of discrimination based on economic status, and reports of unfair treatment on some or all of these grounds are also high in Angola, Ethiopia, Gabon, Kenya, Namibia and Uganda. In contrast, these forms of discrimination are much less prevalent in Burkina Faso, Cabo Verde, Guinea and Sierra Leone.

In short, economic inequality appears to be the most critical element undermining unity and social cohesion — more widespread, in this assessment, than divisions of religion and ethnicity. Yet citizens generally report that their governments are performing poorly (78 percent) when it comes to narrowing the gaps between rich and poor.

Meanwhile, the covid-19 pandemic may exacerbate economic disparities, testing the strength of social bonds as competition for scarce resources, from food to vaccinations, heats up. But the evidence in these recent surveys and experiences on the ground since the pandemic began suggest that despite their differences, Africans may bring more social resources to the table, in the form of tolerance, respect for diversity and a sense of unity, than many commonly assume.