Last Thursday, my mother was elected the new member of Malaysia’s Parliament from Permatang Pauh, a seat that was wrested away from the opposition through the politically motivated conviction of my father, Anwar Ibrahim, a former deputy prime minister and the country’s opposition leader. In February, the highest court in Malaysia sent him to prison for five years on trumped up charges of sodomy. He is serving his third prison sentence since 1999.

In March, I delivered a speech in Parliament focused on good governance and judicial reform on behalf of my father. The reading was deemed seditious by the government, and I was arrested and locked up overnight.

The Sedition Act, which criminalizes speech uttered “to excite disaffection” against the government, is one of this administration’s favorite cudgels. Its definition is so broad that it gives the government sweeping powers to arrest and lock up critics under the guise of punishing “sedition” or in the ostensible pursuit of maintaining public order.

In the last two years, it has been used successfully to harass or prosecute scores of people, mostly government officials, including several members of Parliament. The cartoonist Zulkiflee Anwar Ulhaque, better known as Zunar, was hit with nine charges under the Sedition Act — mostly based on tweets allegedly attacking the judiciary over the verdict against my father. His artwork and cartoons were confiscated, and he is now out on bail. 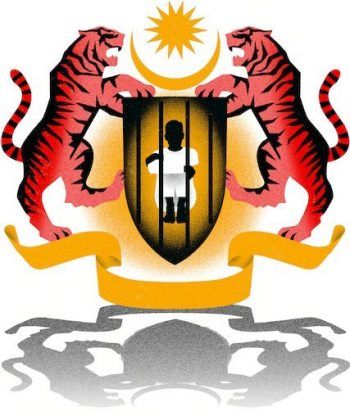 In addition to harassing me and persecuting my father, the state has applied constant pressure on my mother, a state assemblywoman, in hopes that she will wilt both physically and psychologically. The police have also hinted of their plans to interrogate my younger sister, Nurul Nuha, who is leading March 2 Freedom, a coalition to free my father.

We are running out of family members for officials to arrest on bogus charges.

What’s most alarming is that the government’s actions are part of a much larger pattern of threats to the rule of law and human rights. In recent months, every week or so brings news of the politically motivated detention of a government critic. I am out on bail now, but my arrest is intended to silence me and to warn other would-be government critics.

The United Malays National Organization, known as UMNO, and its allies have been in power since independence in 1957. The tempo of state repression quickened two years ago after the 2013 parliamentary elections when the opposition won 51 percent of votes cast, versus 47 percent for the government.

Through gerrymandering and the creation of uneven electoral districts, the ruling coalition clung to power by holding on to 60 percent of the seats. The Electoral Integrity Project, an international organization, recently rated Malaysia as having the worst electoral-district boundaries in the world and among the worst election rules. This places Malaysia alongside countries like Zimbabwe, Angola and Egypt.

The opposition’s showing at the polls two years ago was a political near-death experience for Prime Minister Najib Razak and the ruling party. It was answered with investigations, arrests and imprisonment.

Meanwhile, UMNO, whose main constituency has historically been the ethnic Malay Muslim majority, with help from its pliant coalition partners, has cynically raised the mercury on issues related to race, religion and the Malaysian royal family, so as to keep the multiethnic opposition coalition on the defensive.

Religious freedom in a country with sizable Christian, Buddhist and Hindu minorities is now endangered as public figures vying for popular support among Muslims have supported the persecution of religious minorities. Christians, who make up about 10 percent of the population, have been a prime target.

Last month, for example, in one high-profile incident, demonstrators in Petaling Jaya demanded that Christians remove a cross from the exterior of their church — and the cross was removed. And in 2013, Ibrahim Ali, a leader of Perkasa, a Malay supremacist organization, allegedly publicly endorsed the burning of Bibles.

Instead of focusing on dissenters, government officials should be doing their jobs. For one thing, Malaysia’s economy needs revamping. A sizable portion of the working population in a young country of 30 million citizens still remains eligible for welfare cash handouts. We are too reliant on natural resources. The gap between the rich and poor has been growing and is now among the widest in the region. Our education system remains weak and incoherently structured, creating an unemployable class with poor career prospects.

The Pakatan Rakyat opposition coalition that my party is a part of aims to focus on structural reforms in key economic policies with the goal of creating a clean and more effective government. Reducing inequality and the cost of living, providing affordable housing, good governance and a serious fight against corruption are our priorities.

Malaysia’s answer to extremism has been economic opportunity. Now that this deal is faltering, and now that the borders are porous — more than 1,000 refugees from Myanmar and Bangladesh landed on our shores on Monday — there is a risk that extremism could find a home here.

But we need louder voices to condemn what’s happening here. World leaders need to tell Mr. Najib and his cronies that trade and economic considerations, including the much talked about Trans-Pacific Partnership agreement, will not be placed above civil and political rights. It’s time for Malaysia’s friends around the world to stop giving our leaders a pass on sharply declining human rights and the rule of law.

Nurul Izzah Anwar is a member of the Malaysian Parliament and vice president-elect and election director of the People’s Justice Party.