Czech party politics used to be fairly simple.ย But since 2010,ย its elections have repeatedly delivered instability and fragmentation. And this past Sundayโs voting shows 2017 is no exception.

As expected, Andrej Babiลกโs party ANO won the Czech elections with nearly 30 percent of the vote. His victory has dominated the headlines in the United States and Europe, but the election also was striking for the collapse of the Social Democrats (ฤSSD), the rise of new political forces and a fragmented Parliament with nine parties. 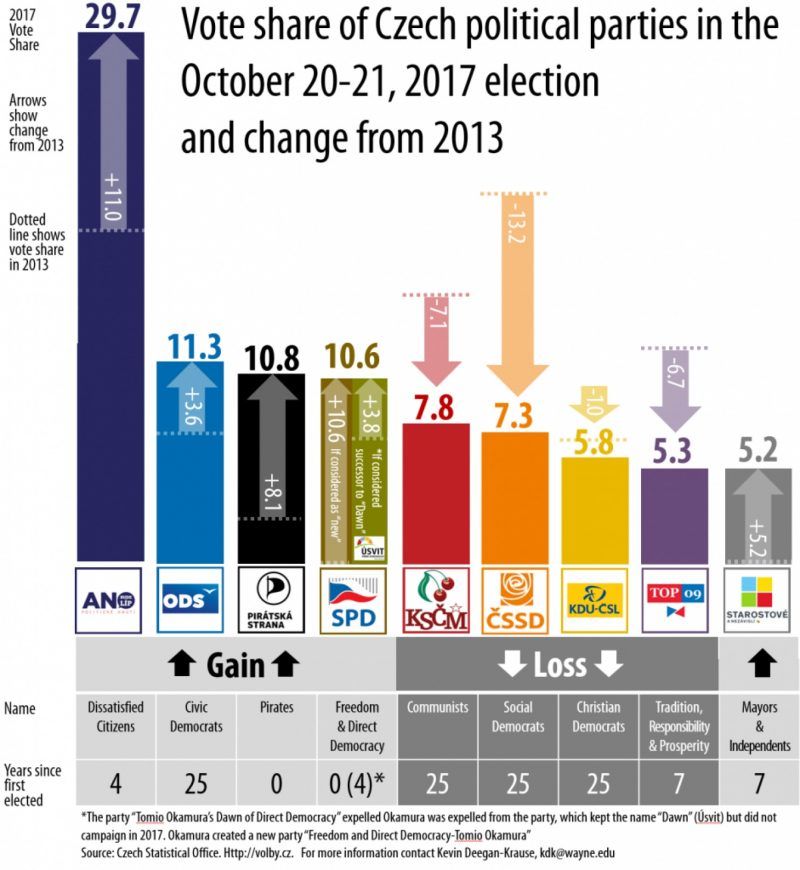 Why did the Social Democrats do so badly?

ฤSSDโs share of the vote slumped to 7.3 percent, its worst performance since the early 1990s. For the past four years, ฤSSD had led a government that delivered considerable economic gains.ย GDP is growing at the highest rate since the economic crisis; Czech unemployment is the lowest in the European Union; and the state budget is in surplus for the first time in more than two decades.

But while ฤSSD led the government, Babiลก, who served as finance minister until May, managed to take the credit.

ANO claimed a significant slice of ฤSSD support in part by acquiring ownership of traditional social democratic issues such as increases in the minimum wage, state pensions and salaries for public sector workers.

But ฤSSD also made mistakes. Prime Minister Bohuslav Sobotka could have acted earlier when the Stork Nest scandal involving a $2 million E.U. subsidy to business interests close to Babiลก first broke in 2016. Although Babiลก eventually was fired as finance minister, the delay highlighted Sobotkaโs indecisiveness.

Aware of Sobotkaโs unpopularity, the party made Foreign Minister Lubomรญr Zaorรกlek its election leader. But that decision was taken too late, and the partyโs lackluster campaign failed to win back voters. ฤSSD also failed to agree on a common line on immigration, which not only exposed the divisions in the party, but helped make the issue more prominent.

Immigration has become a central theme of European politics even in countries like the Czech Republic, which has low levels of immigrants. The Freedom and Direct Democracy party (SPD) won 10.64 percent of Sundayโs vote by fusing anti-immigration, anti-Islam and anti-E.U. appeals. Formed by Tomio Okamura, who has a Japanese-Korean father, the party owes much of its success to Okamuraโs skillful communications and claims to be a successful businessman.

However, Okamura is not new to the Czech Parliament. His previous party รsvit (โDawnโ) won election to the Parliament in 2013 soon after the party was formed but suffered internal disagreements and a major breakaway in 2015 when Okamura left.

Pirates in the Parliament ย

Anti-political and anti-establishment appeals factored into other victories as well, including the Pirate Partyโs 10.8 percent share. A slice of that vote comes from what political scientist Seรกn Hanley dubbed the โliberal centerโย that has migrated from party to party over the past two decades.

But the Pirates also mobilized around hostility to Okamuraโs anti-immigration appeal and won votes from the mainstream parties by criticizing their corrupt and self-serving behavior.

The desire for good governance and a criticism of traditional parties also fueled support for the โMayors and Independentsโ movement, which won 5.2 percent of the vote and six of the 200 parliamentary seats.

ODS bounced back, but the Communists slumped

Along with ฤSSD, the Civic Democratic Party (ODS) used to be one of the two main parties of Czech politics.ย  It won 11.3 percent, a moderate improvement from 7.7ย percent in 2013, by playing to its center-right base. The partyโs criticism of Babiลกโs policy of electronic registration of purchases went down well with small business owners and restaurateurs.

ODS leader Petr Fiala may not be the most charismatic politician, but he has no ties to the corruption scandals that cost the party support in the past. One name associated with previous scandals, Vรกclav Klaus, also factored in ODSโs revival. Vรกclav Klaus junior, the son of the former prime minister and president, won the second highest number of preference votes in the country โ Czech voters vote for a party but express a preference for up to four candidates on the partyโs list. Klausโs success was likely fueled by his regular blog posts on one of the most read online news websites.

The Communists (KSฤM), though, slumped to 7.8 percent, the partyโs lowest result since the fall of communism in 1989. KSฤM lost support in part because ANO and SPD, in particular, effectively mobilized elderly and unemployed voters with anti-establishment themes and promises to protect pensions.

Political scientists look at volatility in elections, using a tool called the Pedersen index that measures the degree of change in vote patterns on a scale from 0 to 100. By this scale, the average volatility in the United States over the last decade was around 4. Volatility in the 2017 Czech Republic election was over 32, a level nearly as big as in the earthquake election that broke open the relatively stable Czech system in 2010.

Thereโs another way to gauge the degree of change: by looking at the age of parties. Half of all the seats in the Czech Parliament are now in the hands of parties that have served no more than one term in Parliament. Nearly two-thirds of the seats belong to parties created since the 2008 global economic crisis.

However, while new and relatively new entrants predominate, the โolderโ parties that first appeared between 1990 and 1992 still claimed around one-third of the total vote. As we argue in a forthcoming article, old parties like ODS, ฤSSD, the Peopleโs Party (KDU-ฤSL) and the Communists manage to survive (though perhaps never reaching their past heights) because of their rooted appeals, organizational structure and ability to replace their leaders.

In contrast, newer parties based on celebrity appeals usually find it far more difficult to survive more than one or two terms.

The results may mark a decisive victory for ANO, but the party may have problems forming a government. Early elections are a distinct possibility.

A governing coalition without ANO involvement is highly unlikely. However, the ongoing Storkโs Nest investigation has led to speculation of an ANO-led government without Babiลก as prime minister.

Despite the harsh words they trade during campaign season, Czech politicians often have been quick to bury hatchets and strike deals when tempted by the trappings and opportunities of power. This election will be no exception.