Ramadan, when night descends, is usually a joyous time. Friends and family gather to break their fast at the iftar meal. Not this year.

Nights are the worst. That is when the bombing escalates. Nowhere is safe. Not a mosque. Not a church. Not a school, or even a hospital. All are potential targets.

On Monday, the Israeli military fired artillery rounds at Al Aqsa hospital in Deir al-Balah, central Gaza, claiming to target a cache of anti-tank missiles. Dr. Khalil Khattab, a surgeon, was operating on a patient when the first shell struck. He ran to the floors below to discover at least four dead and dozens of colleagues — doctors, nurses, orderlies and administrators — injured. The medical staff had become patients. 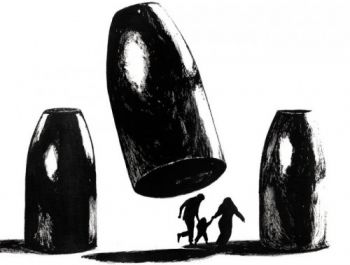 The Gaza Strip — a little less than half the size of New York City — is home to 1.8 million people, mainly Muslims, with a small Christian minority. Its population is cut off from the world, living under the blockade imposed by Egypt and Israel in 2007. For anyone over the age of 7, this is the third time they’ve lived through a sustained attack.

In two weeks of bombing and shelling, more than 600 Palestinians have been reported killed. Since the Israeli ground invasion began, 28 Israeli soldiers have died; the conflict has also claimed the lives of two Israeli civilians.

Here in Gaza City, the electricity was gone; it was dark everywhere. The water supply was foul, food was rancid, and fear permeated the summer night.

On Eighth Street, I visited the al-Baba family. For this family of 15, a corrugated tin roof was all that stood between them and the bombs. Hani al-Baba, 23, heard the hum of a drone. Some are for surveillance, some are weaponized. Which is which, one never knows. The sound was enough to send the children scurrying into corners, trembling and praying. Nervously, Hani scanned the night sky.

Israeli strikes have taken out entire families. In a town near Khan Younis on Sunday, more than 20 members of the Abu Jameh family died when their home was hit. For safety, Hani’s father split the family into different rooms — a scene played out in nearly every home in Gaza, a grim shell game of family members.

Suddenly, a bomb exploded in the field behind the al-Babas’ house: a boom followed by a flash of light. Everyone screamed. The ground shook, the air seemed to implode, sucking the breath from lungs.

Then it was dark again. Why this area was being bombed was unclear. There were no “terrorists,” no rockets. It was a neighborhood of families, scared and cowering in the dark.

The long siege has bled the Gaza Strip dry. There is no money for public services; the majority of the population lives in abject poverty. And now at least 120,000 Gazans have been displaced by the fighting, thousands taking temporary shelter in United Nations schools. Many will return to homes damaged or destroyed, with little or no means to rebuild. Cement is especially severely rationed because Israel suspects it is diverted by Hamas to build tunnels for fighters.

In Shifa Hospital, what struck me were the resilience and dignity of the families. Forced to evacuate under gunfire, they had become refugees in their own land. I watched a grandmother who’d fled the east of the city comforting her four grandchildren and two daughters. The family broke their fast with slices of bread, two yogurts, cucumber and tomatoes. This was their iftar.

A cease-fire agreement is possible, but all parties need to be at the table; Hamas was not consulted over the one proposed by Egypt last week. Even peace might be possible — if the international community has the courage to engage in dialogue with Hamas. The terms outlined by Hamas for a cease-fire are the same as those the United Nations has called for repeatedly: open the border crossings; let people work, study and build the economy. A population capable of taking care of its own would enhance Israel’s security. One that cannot leads to desperation.

In January 2008, barriers along the Gaza-Egypt border were knocked down. Thousands of Gazans poured into Egypt to acquire much needed supplies. I remember the relief within the Palestinian community. This transient glimpse of freedom was a treat.

A neighbor of mine was simply delighted to drink a Coca-Cola. The freedom to move, fresh food and clean water, and the simple pleasure of sipping a soda, this is what Gazans need: the normal life everyone else takes for granted. During the first days the border was open, Hamas suspended rocket attacks from Gaza. Israeli politicians should take note.

Whatever its official statements, Israel has no interest in destroying Hamas; it seeks merely to weaken and isolate it. Hamas gives Israel an out, a convenient villain, someone to blame. Yet the siege of Gaza serves no purpose other than to radicalize the next generation.

Families like the al-Babas shouldn’t have to move their children around the house in the hope that some may survive. Nor should families in Ashdod, over the border in Israel, have to hide in bomb shelters from the militants’ rockets.

Without a process that includes all parties at the negotiating table, though, I fear this cycle of violence, punitive and disproportionate as it is, can lead only to an Islamic State in Iraq and Syria-type extremism among the Palestinians. Only the darkest cynic would wish for that.

Mohammed Omer is a reporter for The Washington Report on Middle East Affairs and other publications.