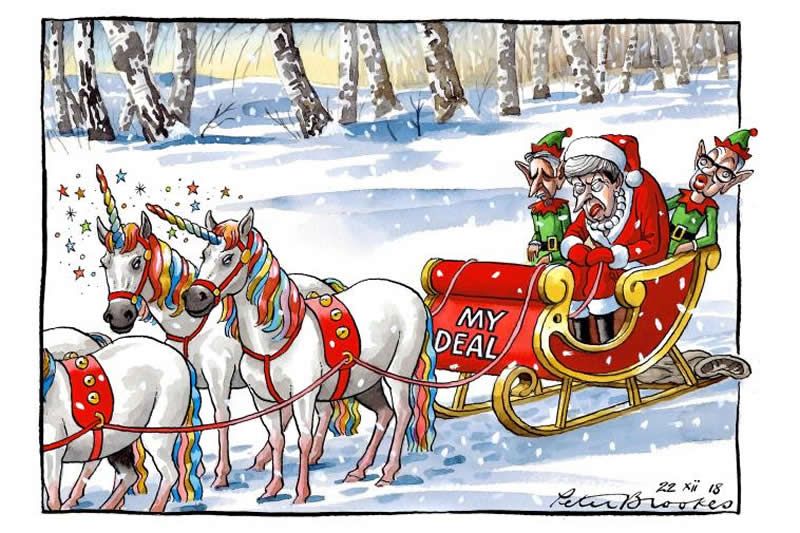 Here’s a sentence I was not expecting to write: “I agree with Iain Martin.” On these pages yesterday, my Times colleague argued that if it comes to a “no-deal” Brexit, “we’ll need MPs and ministers to stay calm”; in which case, Iain says, the world will continue in its orbit.

He’s right. Remainers like myself are in danger of repeating the mistake we made before the last referendum: running around like Chicken Licken, only to find that the sky never did fall in. Our country’s possible futures do not, at least at the outset, look to me very different from each other. Skies do not fall in.

We face a three-way choice. Either (as I hope) we vote again, this time to remain in the EU; or we settle for a watered-down Brexit along the lines of Theresa May’s deal; or we end up with a “managed” no deal: any exit will have to be managed, obviously.

Whichever of the three we choose, the Britain you (God willing) will see next Christmas, or in five or ten Christmases’ time, will be essentially the Britain you and I woke up to this morning. So let me take in turn each of those three paths to continuity.

Well, two cheers for settlement if settlement will settle it, but Rory is asking Remainers to settle because Leavers won’t, and recommending a compromise that Leavers will immediately start trying to unpick. Count me out of such retreat. There are battles somebody has got to win.

Leavers’ veiled threats of civil unrest masquerade as sorrowful warnings, but rioting would look fairly silly when we’re called upon to take up pitchforks against our opinion being sought. Is the electorate of 2016 to man the barricades against the electorate of 2019? Nigel Farage will muster some disappointing turnouts in a few nasty and ill-tempered demos, and that will be the end of it. The Brexit ultras will not be reconciled, but then they never will. They should be regarded as part of the weather.

Besides, a new referendum may well give the same result as the last one. Most of my fellow Remainers will, like me, be disappointed but feel that there comes a point when unwavering popular opinion must prevail. A second, informed, Leave vote would, for most of us, represent that point.

And so to Theresa May’s deal. It’s fine; as good as we’ll get. Once you understand that the transitional deal will become permanent (nobody’s going to find us better trade deals than, via the EU, we have already; and even if we did, nobody’s going to find a way to abolish the Irish border) you’ll see a perfectly tolerable future as a satellite state of the EU. We’ll carry on, faintly humiliated, economically cramped and politically diminished.

How about no-deal, then? Chaos, blockades and tariff wars are highly unlikely. There will be some nail-biting short-term turbulence and sabre-rattling on both sides, maybe even some temporary shortages, but both sides have so much to lose from an enduring stand-off that self-interest will prevail. Politicians are scarily negligent of their countries’ long-term interest, but seldom neglect the immediate one. Neither side is served by economic breakdown. The “no-deal” planning for which the taxpayer is now being forced to pay is just brinkmanship and blackmail by a frozen prime minister who is cautious to the point of recklessness.

We are not, in short, facing a cliff-edge, a revolution, a crashing out, an apocalypse, armageddon, catastrophe, disaster or any other of the variations on doomsday for which politicians and commentators have plundered the thesaurus in 2018. These might at least be exciting. Instead we’re facing something far sadder.

I can think of no better example, both of what this column denies and what it asserts, than yesterday’s news that Britain’s car production is faltering. Said one headline: “UK car production drops by 20 per cent in November as spectre of no-deal Brexit looms.”

No, no, no. “Brexit” has little to do with these wretched figures. The cause has much more to do with Britain’s concentration on making diesel engines when, for reasons well known, diesel car sales are crashing all over Europe. So what to do? We need to rebalance away from diesel, re-tool, switch to new production lines for new models. For this we need big new investment by our mostly foreign-owned car manufacturers. Nobody can honestly claim that for the foreseeable future “choose Britain for your new car plant/model/assembly line” will be an easy sell.

I wish more of you, my readers, could remember the 1970s as I do, aged 19 in 1969, arriving here and seeing Britain with fresh eyes. That is where we’d be going after Brexit.

For ever and anon, politicians blaming foreigners, fretting at the dismal government finances, fiddling at the margins, intervening feebly because there is no money, “doing something,” doing nothing, hoping something will turn up. And abroad, contrary to the foreign secretary’s sales-executive vacuities at a reception held by the Tory Bright Blue think tank this week, a nation more or less affectionately disregarded, losing leverage in a world of great trading blocs.

History has a way of blowing away the fog. I listened yesterday to Radio 4’s on-the-spot report from Afghanistan, a country that, post-occupation, I visited twice for The Times. Then, in the ebb and flow of small victories and minor reverses, it all seemed so complicated, the argument so unclear. Yesterday, looking back, the futility of it all was thrown into ghastly relief.

Thus, if we leave, we shall one day look back on Brexit. No side will have achieved victory. At no point was any side forced to admit defeat. We will be the same nation we are now, just a bit more curdled by souring dreams of exceptionalism, a bit down on our luck.

Ah well, bring it on. I’ll be planting a thousand trees, next autumn.