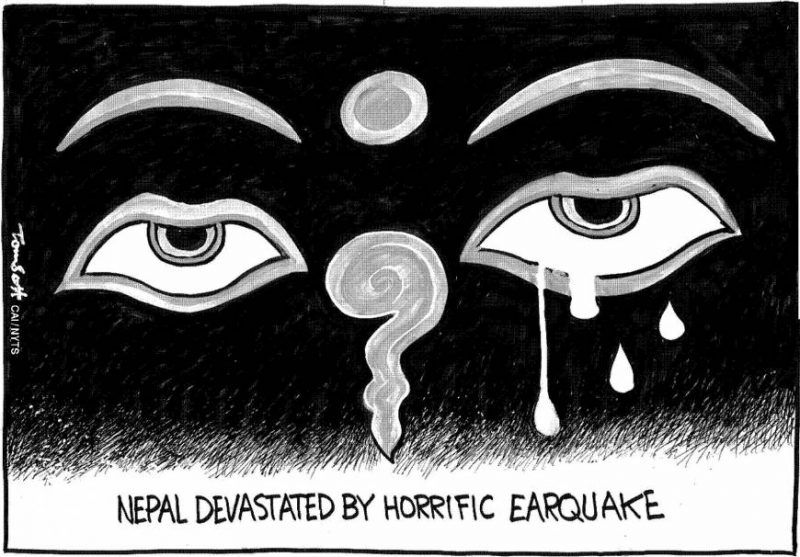 Death and destruction have dominated recent news. Mass media deserted the tragedy of migrants fleeing conflicts in the Middle East and being smuggled to Europe in overladen boats. They had found a more powerful disaster, and rushed to earthquake-savaged Nepal.

Heart-wrenching scenes in Kathmandu of bewildered homeless people amidst the rubble of ancient temples were vividly beamed into comfortable living rooms thousands of miles away, showing how ruthless is the destructive power of nature. Three days after the quake, confusion still reigned: one man said sadly that he had received a single packet of noodles to eat but did not know whether it had been provided by the government or by some NGO.

The wretched lesson is that media and our politicians, from the United States to Asia and back again to Europe, do not understand the needs of a changing world: They respond to the dramatic moment, but fail to tackle deep underlying problems. The question of the day should be whether the tragedy of Nepal can be turned into an opportunity for that country and the world.

Poor landlocked Nepal was defenseless against the fury of the earthquake, which reduced ancient temples in the center of Kathmandu to bricks and dust; obliterated whole villages in remote parts of the country; and caused avalanches in the majestic Himalayas that killed climbers on Everest and left 188 people stranded at base camp.

When the remotest areas have been reached, the death toll may reach 10,000, small for a global catastrophe, but devastating for impoverished Nepal. Reconstruction of a country where unemployment is 40 percent, per capita income is $1,000, may cost $10 billion, or half Nepal’s gross domestic product, according to the U.S. Geological Survey.

The damage to infrastructure and economy will take years to put right. Tourism, which accounts for 10 percent of Nepal’s economy, has been buried under the temples.

Other countries, including the Canada and U.S., Australia, the European Union and Britain, pledged cash. Ordinary British citizens raised almost $30 million for Nepal in two days.

Three days after the earthquake, there was no space for incoming relief aircraft on the tarmac at Kathmandu, so they had to circle for several hours. The pertinent question is whether international aid will still be flowing freely when relief gives way to faltering reconstruction.

In Nepal 40 years ago, I remember a grubby five-year-old boy washing glasses at the family restaurant in Kathmandu: he was there at 10 p.m. and at 6:30 the next morning, always smiling. Was he a child labor victim — or just doing what he had to do to stay alive?

Trekking in the valley, we exchanged greetings with villagers carrying huge hacked chunks of wood on their backs and smaller branches strapped to their heads to cook the family meal. Was this despoliation of precious forest and environmental degradation — or just doing what they had to to stay alive?

At Kathmandu airport then, the Royal Air Force VC-10 aircraft did a brilliant tight turn to land and disgorge British Gurkha soldiers coming home on leave, clutching electronic gear and children with teddy bears bigger than themselves. Were they mercenary soldiers of fortune — or following a fine fighting tradition linking Nepal and the United Kingdom going back to 1817?

Nepal has lagged the economic progress of other Asian countries because of a mixture of ingrained landlocked poverty and pernicious politics, which saw a paternalistic Eton-educated king murdered in a palace feud, succeeded by his autocratic brother who was himself overthrown when the monarchy was abolished in 2008. Since then, fractious politicians have failed to agree on a new constitution, with Maoist members of parliament sniping at 75 year-old Prime Minister Sushil Koirala, accusing him of being too slow — a complaint they were quick to repeat in criticizing his handling of the earthquake.

Being sandwiched between India and China has not helped Nepal to unleash the undoubted energy and talents of its people, but has created new mischief for politicians — Nepali, Indians and Chinese, to play.

Stronger economic development would not have stopped the earthquake devastation, but would have given Nepal a fighting chance of recovery. What will happen to Nepal after rescuers and media have gone home exhausted with the last miraculous escapes from the quake or tragic death in aftershocks?

Will it return to being a quaint mysterious land, forgotten until another tragedy hits? Or could it become a model for cooperation between the World Bank, the Asian Development Bank and China’s new development institutions? In the middle of devastation, this could be Nepal’s opportunity of getting back on its feet — but it would require goodwill and imagination on all sides, qualities sadly lacking.

It is hard to be optimistic looking at self-seeking Nepali politicians and their opportunistic neighbors, or how rich countries have turned inward. The world has become more global, but politicians and press are parochial.

Foreign policy was ignored in the U.K. election campaign until Labour leader Ed Miliband made a stirring speech. The U.K. is hardly alone. American media and politicians are fixated on themselves. Japan and other countries have cut their aid budgets. Aid has earned a bad name because so much has been wasted or siphoned off in corruption or to offer easy profits for big corporations of the aid-givers.

Restoring hope to Nepal requires a lively dialogue between local leaders and an engaged world, but where is the engagement?

The U.S. especially has been badly burned by its experiences in the Middle East. Indeed, the other horror story of the month — people putting their lives in the hands of smuggler gangs to try to escape banditry, warlordism and Islamic terror in Libya, Iraq and Syria — is a result of Washington’s failures. For years the West either propped up or turned a blind eye to tyrannies in the Middle East; then the U.S. and its allies intervened to topple rulers and create a dangerous power vacuum.

There must be another way — of talking and drawing on our humanity to work together on common problems. It always amazes me how we gather breathlessly to cheer the rescue of a single person from the rubble in Nepal, but each day 21,000 die from malnutrition and the world takes no notice.

Nepal would be a good place to start cooperating for a new world precisely because it is so poor, has suffered disaster and is not a player in great power or ideological disputes.

Kevin Rafferty, formerly in charge of the Asian coverage of the Financial Times, has edited daily newspapers in Hong Kong, India, Malaysia and Thailand.