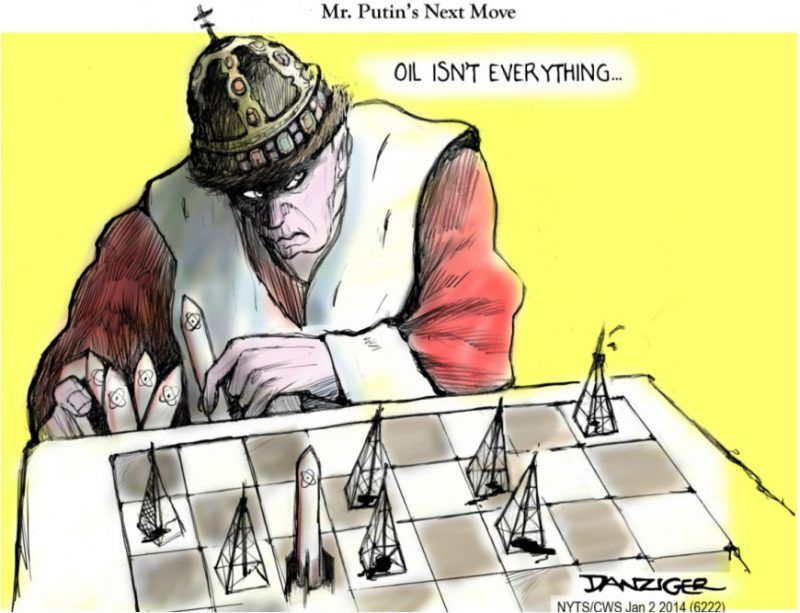 Since Russia invaded Crimea last summer, the West has relied on a strategy of economic sanctions and international isolation to compel the Kremlin to withdraw its support for the rebels in eastern Ukraine. But Russian President Vladimir Putin’s recent series of diplomatic successes — in particular, with Iran, North Korea, and Pakistan — has all but negated the effectiveness of this strategy.

To be sure, Putin was shunned at November’s Group of 20 summit in Brisbane, with the Australian hosts and Western leaders berating him in bilateral meetings for violating Ukraine’s sovereignty and creating a rift with its Western economic partners. Putin left early, proclaiming that Western sanctions were harming European economies more than Russia anyway.

But Putin was not deterred, proceeding to launch major initiatives with countries of vital security concern to the West, boosting Russia’s diplomatic leverage and enhancing its value to its most important, albeit still coy, partner: China. As Putin declared in a recent interview, his government is committed to ensuring that Russia does not become internationally isolated behind a new Iron Curtain.

With Iran, the Kremlin has launched a joint bank that will enable Russian companies to expand bilateral trade without using Western currencies or worrying about Western financial sanctions. The deal builds on this summer’s “oil-for-goods” agreement, whereby Russia will exchange its own goods for as many as 500,000 barrels of Iranian oil daily.

Bilateral security cooperation also progressed, with the Russian Navy holding a three-day maritime exercise with Iran’s Caspian fleet. So far, efforts to weaken Russia’s relationship with Iran — not to mention its other major Middle Eastern ally, Syria — have repeatedly failed. In October, Russia’s United Nations ambassador, Vitaly Churkin, faulted the U.S.-led initiative against the Islamic State for its failure to involve Iran and Syria, which he called “logical allies in the fight against terrorism in the region.”

Moreover, Russia has signed an agreement that will ensure that its own firms remain the dominant foreign players in Iran’s civil nuclear-energy sector, even if a nuclear deal leads Western powers to ease sanctions on Iran. Under the terms of the deal, Russia will help Iran construct at least two more nuclear reactors — and as many as eight.

The new plants, like Iran’s first Russian-built reactor at Bushehr, would be subject to International Atomic Energy Agency monitoring and use only Russian-made nuclear fuel, which would be returned to Russia for storage to prevent Iran from developing dangerous nuclear technologies. Still, Russia has agreed to train more Iranian nuclear experts, and may allow Iran to manufacture some of the components of the uranium fuel rods itself.

In North Korea, Russian diplomacy has made even more progress. Last summer, Putin forgave 90 percent of North Korea’s $11 billion Soviet-era debt, and announced that the remaining $1 billion could be used as part of a “debt-for-aid” program, funding health, energy, and educational projects in the country.

This opened the way for new development projects and increased bilateral and regional investment. For example, Russian firms are planning to help rebuild North Korea’s railway network in exchange for access to the country’s undeveloped mineral resources.

Russia has hosted more senior North Korean leaders than any other country last year, including the reclusive leader Kim Jong Un’s special envoy, Choe Ryong Hae, a senior official in the ruling Workers’ Party, who spent an entire week meeting with Russian political and economic leaders. In fact, Russian officials have indicated that Putin is prepared to become the first head of state to meet with Kim, who is eager to deepen ties with Russia to compensate for his faltering relationship with China.

November was also a good month for Russian diplomacy in Pakistan, with Sergei Shoigu becoming the first Russian defense minister to visit the country since 1969. During his stay in Islamabad, Shoigu and Pakistani Prime Minister Nawaz Sharif signed an unprecedented agreement that could establish a framework for joint military exercises, reciprocal port visits and a wide-ranging dialogue on regional security issues.

Moreover, the Kremlin has relaxed its opposition to Pakistan’s full membership in the Shanghai Cooperation Organization, along with China, Kazakhstan, Kyrgyzstan, Russia, Tajikistan, and Uzbekistan. And the Russian government has agreed to sell Pakistan as many as 20 Mil Mi-35 “Hind E” heavy attack helicopters to aid in the fight against terrorism and drug trafficking.

Until now, Russia has refrained from selling advanced military equipment to Pakistan, in order to avoid damaging its relationship with India. But, as Russia’s strategic relationship with India has strengthened, including through a joint mechanism to purchase and deliver Russian weapons to the Afghan government, Putin has gained the confidence to bolster cooperation with Pakistan. The announcement of several more bilateral deals during Putin’s recent visit to India suggests that his confidence was merited.

All of this could augment Russia’s leverage with China, which has an interest in increasing its influence over Iran, North Korea, and Pakistan, but has subtly sought to exploit Russia’s isolation. Russia’s vast natural-gas wealth also appeals to China, which drove a hard bargain in the two countries’ recently concluded 30-year, $400 billion gas-supply deal.

By giving key regional actors alternatives to bowing to U.S. pressure on issues like nuclear nonproliferation and the fight against terrorism, Russia’s recent maneuvers have complicated American diplomatic efforts considerably. Though Putin has not broken from the international consensus on these issues, he could block progress in order to compel the U.S. to change its policies toward Ukraine, Syria and other countries. As a result, a dangerous global security situation could become even more so.

Richard Weitz is a senior fellow and director of the Center for Political-Military Analysis at the Hudson Institute. © Project Syndicate, 2014. www.project-syndicate.org