The famed Nazi hunter Simon Wiesenthal often said, “Where democracy is strong, it is good for Jews; where it is weak, it is bad for Jews.” Today, 100,000 Jews in Hungary are worried about their future.

Last week, the mayor of a small town in eastern Hungary, presided over the hanging in effigy of Israeli Prime Minister Benjamin Netanyahu and former President Shimon Peres, saying that he did it to protest “the efforts of Freemason Jews to rule the world.” While the Ministry of Foreign Affairs condemned the “lynching,” the reality is that this action occurred in a country where anti-Semitism is increasingly legitimized in word and deed by Hungary’s political leadership.

Against the backdrop of the Hamas war in Gaza, violent anti-Semitism has erupted across Europe, including shocking mob violence in France and Germany and terrorist killings in Belgium. In every case, government officials stressed their opposition to anti-Semitism and pledged to take action. 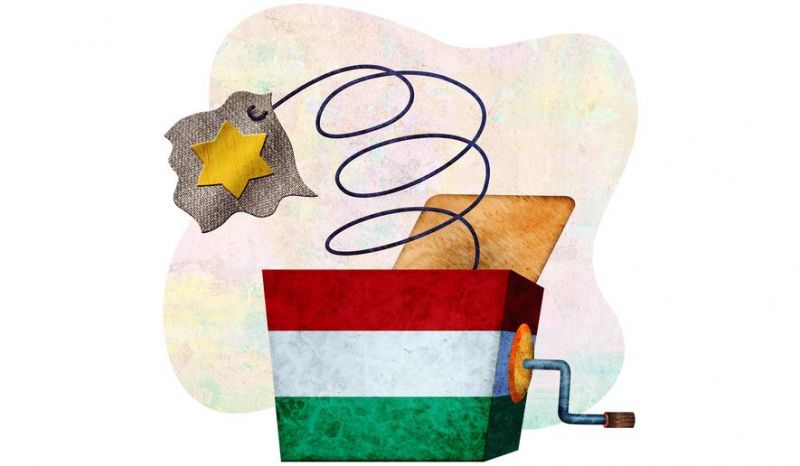 However, in Hungary, top political figures are lurching ever closer to rejecting democratic values and legitimizing anti-Semites and anti-Semitism.

Recently, Hungarian Prime Minister Viktor Orban gave a speech in which he flatly declared that “the era of liberal democracies is over.” Mr. Orban added, “I don’t think that our European Union membership precludes us from building an illiberal new state based on national foundations,” and so he suggested that “[t]oday, the world tries to understand systems which are not Western, not liberal, maybe not even democracies, yet they are successful,” while holding up China, Turkey and Russia as models.

Just a few days before Mr. Orban’s speech, Hungary nominated writer Peter Szabo to be the ambassador to Rome. Among Mr. Szabo’s well-known one-liners was his description of Jews as “the agents of Satan” and that “money is their God.” That Mr. Szabo withdrew his nomination after severe international criticism is beside the fact; the ominous thing was that the Hungarian government saw fit to nominate him in the first place.

A steady stream of incidents involving Hungary’s attempted whitewashing of its collaboration during the Holocaust also bear witness to this trend. While the government undertook to officially commemorate the 70th anniversary of the deportations of more than 400,000 Jews under Nazi occupation in 1944-45, Budapest has also consistently tried to whitewash and minimize the extent of Hungarian anti-Semitism and collaboration. Under Mr. Orban’s direct order, a monument in the capital city was just created that, in the words of one Jew who lost family members in the Holocaust, “falsifies history because it tries to show that deportations started with the Nazi invasion and that only the Nazis were guilty.”

Even as the government pledged to create a new Holocaust museum, it has chosen as the director of that project an ideologue closely connected to Mr. Orban, who wrote that the Nuremberg trials (and other trials of Nazis) “were political trials that served political purposes and, therefore, they brought alien elements to the jurisdictional system” and described Hungary’s post-World War II fate as “[a]fter 25 years of frightening of the right-wing press, a Jewish-communist world conspiracy seemed to materialize.” She also wrote approvingly of an imaginary “understanding that the Hungarian nobility would provide Hungary’s political leadership and that the Jewish leaders would stay away from politics and busy themselves in the economic sphere and the professions.”

The Orban government also created a new historical institute, ironically named Veritas (Truth) and then appointed as its director a military historian who labeled the 1941 deportation of about 20,000 Jews from Hungary to Kamanets-Podolsky and their killing, simply a “police action against aliens.”

All this led the president of the Jewish community, Andras Heisler, to announce the unprecedented and bold step of officially boycotting the government’s Holocaust commemorations. “We wanted to send a very strong message to the government that we are interested in truthful, not symbolic, remembrance, and this is something money cannot buy,” he declared.

It gets worse. One of the Hungarian parliament’s new deputy speakers is a former skinhead who is a member of the extremist anti-Semitic Jobbik party — now Hungary’s second-largest party — and who was convicted of a hate crime against a Roma. Another member of Jobbik was appointed chairman of the parliamentary Committee on Education and Culture. According to her husband, the couple does not participate in Holocaust commemoration events because “we remember only genocides that actually happened.”

Since Hungary’s emergence from the terrors of communist rule, it has established itself as one of Eastern Europe’s success stories. In doing so, it also carved out a strong positive image in the United States. The recent Hungarian election results have also been hailed by some in the West who see Mr. Orban as a dynamic conservative leader comparable to Ronald Reagan. Nonsense. Ronald Reagan would never have allowed his government to embark on an anti-democratic path that Mr. Orban has begun to walk. Unless Mr. Orban chooses to change his direction, future comparisons will be more apt with Russia’s Vladimir Putin.

Rabbi Abraham Cooper is associate dean of the Simon Wiesenthal Center. Mark Weitzman is the center’s director of government affairs.