Before the environmental activist and gay rights lawyer David Buckel set himself afire in Prospect Park in Brooklyn on April 14, he wrote a letter explaining that he had chosen his “early death by fossil fuel” as an act of protest against the environmental catastrophe that we are bringing upon ourselves and the planet. It was a horrifying end, not least because in life Mr. Buckel had successfully taken on issues as seemingly intractable as the legalization of same-sex marriage. If someone so capable had given up on the environment, one woman remarked to a Times reporter, “What does that mean for the rest of us?”

I was thinking about Mr. Buckel and about despair a few nights later, over a drink with Joe Walston of the Wildlife Conservation Society. As director of that organization’s worldwide field conservation work, Mr. Walston routinely comes face-to-face with the dark forces of human overpopulation, mass extinction of species, climate change and pollution. But he is also the co-author of a paper being published this week in the journal BioScience that begins with the uplifting words of Winston Churchill to the British nation in June 1940, under the shadow of the Nazi conquest of France: “In casting up this dread balance sheet and contemplating our dangers with a disillusioned eye,” Churchill declared, “I see great reason for intense vigilance and exertion, but none whatever for panic or despair.”

Mr. Walston and his co-authors go on to argue against the increasingly common view that these are the end times for life as we know it. Instead, they suggest that what the natural world is experiencing is a bottleneck — long, painful, undoubtedly frightening and likely to get worse in the short term — but with the forces of an eventual breakthrough and environmental recovery already gathering strength around us. 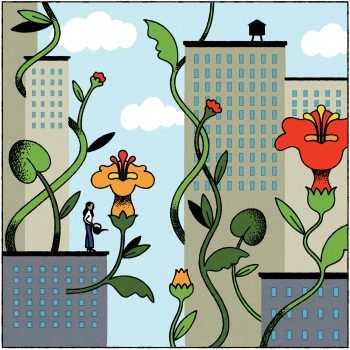 Mr. Walston sipped his beer and listed what he called “the four pillars” of conservation in the modern era — a stabilized human population, increasingly concentrated in urban areas, able to escape extreme poverty, and with a shared understanding of nature and the environment — “and all four are happening right now.” He singled out the trend toward urbanization as the biggest driver of environmental progress, bigger perhaps than all the conservation efforts undertaken by governments and environmental groups alike.

Cities have of course endured a reputation for much of the industrial era as a blight, the stinking antithesis of conservation. “But what happens in urban areas?” Mr. Walston asked. New arrivals from the countryside “get better access to medical care, they experience decreased child mortality and in time that leads them to have fewer children” — the so-called demographic transition — and those children go on to better schooling and potentially more rewarding work lives.

The pace of the global movement away from rural areas and into urbanized areas — a category that includes suburbs and small towns as well as city centers — is startling. In my own lifetime, we have gone from 30 percent of the world’s population living in urban areas to 54 percent today, with the likelihood that the number will rise as high as 90 percent later in this century.

Unfortunately, that means the bottleneck will get worse over the next few decades, according to Mr. Walston and his co-authors, because urbanization imposes short-term costs, including an increase in overall consumption. But it also leads to reduced per capita energy consumption, as well as reduced birthrates, and it reopens old habitat in abandoned rural areas to wildlife.

That’s already begun to happen in Europe, where wolves, bears, lynx, bison and other species have moved out of protected areas to re-wild a densely populated (but highly urban) continent. If we can hold on into the next century, Mr. Walston said, urbanization could set up the conditions for that sort of recovery worldwide.

Holding on for another century is of course no easy thing. It will require the kind of “intense vigilance and exertion” Churchill called for in the dark early hours of World War II. We will need to undertake a far more concerted effort not just to establish protected areas, Mr. Walston said, but to ensure that they still contain the species said to be living there, as the stock for an eventual recovery. (“Protected area” is now often a euphemism for empty forests and oceans.)

It will demand significant action to reduce our dependence on fossil fuels and slow the rate of climate change, because recovery will not happen if we cook the planet in the meantime. Finally, it means working to improve the cities of the world and their ability to provide the basic ingredients of public health — and the demographic transition — including sewage disposal, garbage removal, clean water delivery and a continuing connection to the natural world.

That thought brought me back to David Buckel. After retiring as a civil rights lawyer, Mr. Buckel devoted himself to exactly the kind of work Mr. Walston and his co-authors talk about. He made city life better by developing compost programs and collaborating with urban gardeners around New York City, with a particular focus on low-income neighborhoods.

Maybe in the end he believed his work was too modest. Or maybe he shared in the widespread sense of depression and futility because our decidedly un-Churchillian federal leadership seems intent on actively worsening problems like species extinction, climate change, public health, you name it.

Ultimately, we have no way of knowing if Mr. Buckel’s suicide was a pure act of protest or one partly influenced by other factors, like mental or emotional illness. But those looking to find meaning in it should emulate his life, not his death. They should stand up in ways large and small to help life on Earth through the current dreadful bottleneck. They should act now so some future generation — our grandchildren of the breakthrough — will look back at what we have done with something bordering on gratitude.

It’s a stretch to imagine anyone ever saying of us, “This was their finest hour.” But at least they will know that we lived in such a way as to avoid utterly laying waste to the planet.

Richard Conniff is the author of House of Lost Worlds: Dinosaurs, Dynasties and the Story of Life on Earth and a contributing opinion writer.