That empty expression President Xi Jinping of China made when he shook hands with Prime Minister Shinzo Abe of Japan was his blandest face of the entire APEC summit last month. It was their first meeting, and it lasted only 25 minutes.

And yet it was a turning point in relations between China and Japan, especially after renewed tensions over the East China Sea islands that both states claim as their own — known as the Senkaku in Japanese, and the Diaoyu in Chinese. In fact, the Chinese government had expressed such an outcry over that disagreement in recent months that it would need quite a good excuse to justify to the Chinese public having any direct contact with Japan’s prime minister. Hence the strict, lopsided conditions Mr. Xi set before meeting with Mr. Abe last month: Japan would have to formally acknowledge there was a territorial dispute between the two countries, and Mr. Abe would have to promise to no longer visit the Yasukuni Shrine, which honors Class A war criminals among Japan’s war dead. 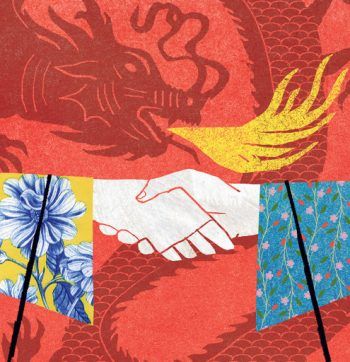 But just before the summit the two sides reached a cleverly crafted agreement conveniently open to multiple interpretations. It stated that China and Japan hold different views about their recent tensions in the East China Sea — allowing the Chinese side to claim to its people that Japan had formally acknowledged the existence of a dispute, as Mr. Xi required, while allowing the Japanese government to tell its own audience back home this wasn’t so. (Yasukuni was not mentioned.)

Mr. Abe and Mr. Xi deserve credit for this constructive vagueness. By sharing in it, they took a responsible step toward calming tensions in East Asia. Mr. Abe, in particular, seems to have calculated that while he would lose points with some supporters, he could bear such a burden more readily than Mr. Xi, who is struggling to bridge divisions between hawks and doves in China’s military and foreign policy establishment.

This could not have been easy for Mr. Abe. China has frequently sent patrol boats into the waters around the Senkaku/Diaoyu islands, and the Japanese public generally supports taking a tough stance against such provocations and on security matters having to do with China. According to a joint survey conducted this summer by the Japanese nongovernmental group Genron NPO and the China Daily, 93 percent of the Japanese do not have a good impression of China.

But many Japanese also understand that China is an important neighbor and essential to their own peace and prosperity: In the same survey, over 70 percent of Japanese said the relationship between Japan and China was important, and about 80 percent expressed concern over its current state or the need to improve it. Mr. Abe knows this.

Mr. Abe also knows Mr. Xi is in a more delicate position than he. On the one hand, tensions with Japan have economic costs for China. According to China’s Ministry of Commerce, Japanese investment in China from January to June 2014 fell by almost half compared with the same period in 2013. Commerce Minister Gao Hucheng told a delegation of Japanese business people in September that tension between the two countries was hurting economic ties, and that that was something he did not want to see.

Yet it is also a general principle of Chinese politics that a leader without a solid power base cannot improve ties with Japan. The Chinese leadership uses nationalist fervor to compensate for a deficit in legitimacy, and to unite the party and the nation, and Japan is a familiar target, especially for the hawks in the military and the propaganda department. Judging by the Chinese media’s lukewarm coverage of that historic handshake last month, Mr. Xi is not yet secure enough to actively promote the Chinese-Japanese relationship.

But that encounter has opened the way for improvement. Although this was not reported in China, Mr. Abe told Mr. Xi during the meeting that he thought Japan and China could cooperate over four issues — to foster greater cooperation in the East China Sea (including over the implementation of a 2008 agreement on the joint development of oil and gas in the area); deeper economic relations; a more stable security environment in East Asia and, first and foremost, greater mutual understanding.

The Abe-Xi handshake has already revived talks that had stalled, like the Policy Dialogue on the Mekong Region and the New Japan-China Friendship Committee for the 21st Century, both of which met recently in Beijing. The Friendship Committee, for which I serve as secretary general on the Japanese side, is a panel of nonpoliticians that acts as an advisory body for the prime ministers of the two countries. (We were the first Japanese group of any kind to see Premier Li Keqiang since he assumed office in March 2013.) During our meetings last week, we spent some time clearing up confusion the Chinese media had created on the Chinese side about Mr. Abe’s commitment to his pre-summit agreement with Mr. Xi. Then we discussed ways to strengthen the bilateral relationship, for example by establishing a crisis-management mechanism to avert clashes in the East China Sea.

Now Mr. Abe and Mr. Xi must show the Japanese and Chinese peoples the tangible benefits of such cooperation. That starts by letting them know the promising facts. For example, China and Japan have already been cooperating on economic and nontraditional security issues, such as energy conservation and pollution control. The Japan Maritime Self-Defense Force protects Chinese-operated merchant ships in international anti-piracy operations off the coast of Somalia. The Japanese government provides significant technical assistance and grants to schools and local NGOs in China. A record number of Chinese tourists have been visiting Japan.

The Friendship Committee also discussed ways to strengthen the exchange program that since 2007 has brought to Japan at least 30,000 young people from the Asia-Pacific region, including China. However trivial such people-to-people contact may seem, it can change the dynamic between the two countries by dispelling common misconceptions. More than anything else, in fact, greater understanding between the Japanese and Chinese peoples can help Mr. Abe and Mr. Xi overcome pressure from the nationalistic forces in the establishment camps of Japan and China.

Akio Takahara, a professor at the University of Tokyo, is currently a visiting scholar at Peking University.