On April 15, 2013, James Costello was cheering on a friend near the finish line at the Boston Marathon when the bombs exploded, severely burning his arms and legs and sending shrapnel into his flesh. During the months of surgery and rehabilitation that followed, Mr. Costello developed a relationship with one of his nurses, Krista D’Agostino, and they soon became engaged. Mr. Costello posted a picture of the ring on Facebook. “I now realize why I was involved in the tragedy,” he wrote. “It was to meet my best friend, and the love of my life.”

Mr. Costello is not alone in finding meaning in life events. People regularly do so for both terrible incidents, such as being injured in an explosion, and positive ones, like being cured of a serious disease. As the phrase goes, everything happens for a reason.

Where does this belief come from? One theory is that it reflects religious teachings — we think that events have meaning because we believe in a God that plans for us, sends us messages, rewards the good and punishes the bad. 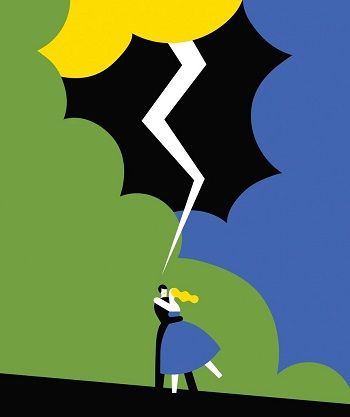 But research from the Yale Mind and Development Lab, where we work, suggests that this can’t be the whole story. In one series of studies, recently published in the journal Cognition, we asked people to reflect on significant events from their own lives, such as graduations, the births of children, falling in love, the deaths of loved ones and serious illnesses. Unsurprisingly, a majority of religious believers said they thought that these events happened for a reason and that they had been purposefully designed (presumably by God). But many atheists did so as well, and a majority of atheists in a related study also said that they believed in fate — defined as the view that life events happen for a reason and that there is an underlying order to life that determines how events turn out.

These atheists’ responses weren’t just the product of living in America’s highly religious society. Research done at Queen’s University in Belfast by the psychologists Bethany Heywood and Jesse Bering found that British atheists were just as likely as American atheists to believe that their life events had underlying purposes, even though Britain is far less religious than America.

In other studies, scheduled to be published online next week in the journal Child Development, we found that even young children show a bias to believe that life events happen for a reason — to “send a sign” or “to teach a lesson.” This belief exists regardless of how much exposure the children have had to religion at home, and even if they’ve had none at all.

This tendency to see meaning in life events seems to reflect a more general aspect of human nature: our powerful drive to reason in psychological terms, to make sense of events and situations by appealing to goals, desires and intentions. This drive serves us well when we think about the actions of other people, who actually possess these psychological states, because it helps us figure out why people behave as they do and to respond appropriately. But it can lead us into error when we overextend it, causing us to infer psychological states even when none exist. This fosters the illusion that the world itself is full of purpose and design.

Some people are more prone to find meaning than others. In large-scale survey studies also reported in the journal Cognition, we found that highly paranoid people (who tend to obsess over other people’s hidden motives and intentions) and highly empathetic people (who think deeply about other people’s goals and emotions) are particularly likely to believe in fate and to believe that there are hidden messages and signs embedded in their own life events. In other words, the more likely people are to think about other people’s purposes and intentions, the more likely they are to also infer purpose and intention in human life itself.

Whatever the origin of our belief in life’s meaning, it might seem to be a blessing. Some people find it reassuring to think that there really are no accidents, that what happens to us — including the most terrible of events — reflects an unfolding plan. But the belief also has some ugly consequences. It tilts us toward the view that the world is a fundamentally fair place, where goodness is rewarded and badness punished. It can lead us to blame those who suffer from disease and who are victims of crimes, and it can motivate a reflexive bias in favor of the status quo — seeing poverty, inequality and oppression as reflecting the workings of a deep and meaningful plan.

Not everyone would go as far as the atheist Richard Dawkins, who has written that the universe exhibits “precisely the properties we should expect if there is, at bottom, no design, no purpose, no evil, and no good, nothing but blind, pitiless indifference.” But even those who are devout should agree that, at least here on Earth, things just don’t naturally work out so that people get what they deserve. If there is such a thing as divine justice or karmic retribution, the world we live in is not the place to find it. Instead, the events of human life unfold in a fair and just manner only when individuals and society work hard to make this happen.

We should resist our natural urge to think otherwise.

Konika Banerjee is a graduate student and Paul Bloom is a professor, both of psychology, at Yale.