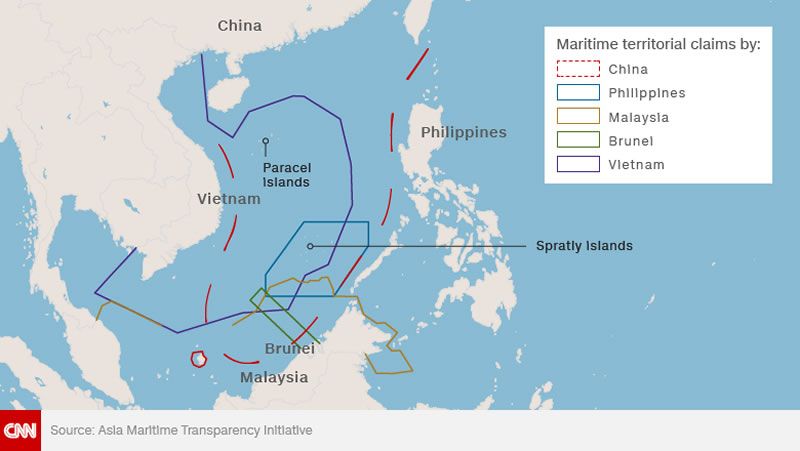 Controversial Philippines president Rodrigo Duterte appears to have secured a major concession from Beijing in the South China Sea.

If it lasts, this will be chalked up as a victory for Duterte's pivot to China and a geopolitical setback for the United States.
By cozying up to China and trash-talking America, Duterte has achieved something that Washington couldn't deliver: a peaceful resolution to the Scarborough Shoal standoff.

The significance of this can't be overstated.

Back in 2012, China seized the Scarborough Shoal by deploying powerful coastguard cutters to evict the Philippine navy.

Wary, not unjustly, of being drawn into a conflict with China over uninhabited rocks, Washington chose not to clarify whether its Mutual Defense Treaty with the Philippines would trigger an American military response.

So when the US brokered a deal in which the Philippines and China agreed to withdraw their ships, Beijing simply reneged on its part. China kept the blockade intact, which its coastguard enforced by chasing and firing water cannons at approaching Filipino vessels.

For the next four years, Washington failed to craft an effective strategy to get Chinese ships out of the shoal.

Despite all America's military might, threatening to use it at Scarborough just wouldn't have been credible -- a dilemma that still lies at the heart of Washington's inability to rollback Beijing's South China Sea outposts.

Duterte, by contrast, appears to have used the one form of leverage Washington didn't have: the allure of close relations with a US ally.

His explosive talk of "separation" with America, realignment with China, and an "independent" foreign policy struck exactly the tone Beijing wanted to hear.

His readiness to enter into bilateral negotiations with Beijing over the South China Sea also brought Manila in line with a core Chinese demand.

Lifting the Scarborough blockade, then, is China's gift to Duterte for his sustained attack on America.

While it's not clear what concessions, if any, Duterte has granted in the process, for now this is overwhelmingly good news for most Filipinos.

Beijing, in all this, has pulled off a diplomatic masterstroke.

It has earned goodwill from Manila and wedged US-Philippines relations simply by ending its illegal activities.

What's more, it hasn't really given much away.

Beijing hasn't dropped its claims to the Scarborough Shoal, nor have its own fishermen been forced to leave. It hasn't even withdrawn its coastguard vessels which, though well-behaved, continue to patrol the shoal.

In fact, by sharing fishing access at the shoal, Beijing has surreptitiously brought itself in line with the Permanent Court of Arbitration's July 12 ruling on the South China Sea, even as it continues to reject the legality of the verdict.

China has nevertheless granted some concessions.

Having reopened Scarborough to Filipino vessels, it will be very difficult for Chinese dredgers to undertake land reclamation.

To do so would undercut the political rapprochement that China is trying so hard to foster with the Philippines.

Accordingly, Beijing's purported aim of turning the shoal into a military airstrip within missile range of Manila has, in effect, been put on ice.

China's ability to coerce the Philippines has also been reduced.

Although Beijing can easily reinstate the blockade, this would similarly undercut its political objectives. In other words: the one-off lifting of the blockade has removed an ongoing source of Chinese leverage over Manila.

This suggests Beijing is serious about making actual compromises to improve its ties with Manila at Washington's expense.

How much this hurts America is a mixed bag.

A fishing deal between Beijing and Manila doesn't necessarily undercut Washington's bottom line that disputes be resolved peacefully in accordance with international law.

Unless President Duterte has compromised on the Philippines' sovereign rights at Scarborough -- an impeachable offence under Filipino law -- any accord on the lifting of China's blockade is a positive development.

Duterte's victory, in fact, has potentially removed a major headache for Washington.

Over the past few months, Scarborough Shoal had again been shaping up as a pivotal test of wills for the US and China, with Washington deploying sophisticated military hardware to the Philippines in a quiet attempt to deter Beijing from militarizing the reef.

Given America's track record of weakness and warming China-Philippines ties, Beijing may well have called Washington's bluff once again. It's thus a lucky save for US policy that a Scarborough deal has put off Chinese militarization for now.

Even so, America has sustained considerable geopolitical losses.

The significance of a Chinese compromise at Scarborough is likely to add momentum to political rapprochement between Beijing and Manila.

While more Filipinos view the US favorably than they do China -- 92% to 54% in a Pew survey last year -- these numbers may well shift in response to Chinese concessions like this.

Such trends could make it easier for Duterte to allay popular concerns about his pro-China foreign policy.

This doesn't mean he will necessarily evict the US military as he's recently threatened. But if cooperation with China continues smoothly, US-Philippines ties could become even more frosty, possible neutralizing the strategic value of a key American ally in Southeast Asia.

More broadly, the way that Duterte, not Washington, brought the four-year Scarborough Shoal standoff to a close exposes a central failure in America's South China Sea policy: Washington's hesitancy to stand up to Beijing lest it spark a military crisis leaves regional partners vulnerable and open to China's entreaties.

The danger is that other countries will follow the Philippines' lead: distancing themselves from the United States and making deals with China that chip away at the regional order. If this comes to pass America's position will be truly weakened.

Ashley Townshend is a Research Fellow at the United States Studies Centre at the University of Sydney, Australia. The views expressed here are solely his.