When I was 21, back in the mid-1990s, I remember going to a farewell party for a young woman who was leaving Italy to work toward a Ph.D. in Canada. After a few years of struggling with the nepotism and lack of opportunities in Italian academia, she professed her wish to never come back to Italy “except for holidays.” That was the first time I witnessed a case of Italian brain drain. Italian emigration back then was mainly associated with the flight of researchers, scientists and other highly skilled professionals attracted by the chance for better careers abroad. For a G-7 country at the time this was unparalleled. But hardly anyone in the government or the establishment seemed to care, no matter how suicidal brain drain can be for a country over the long term. 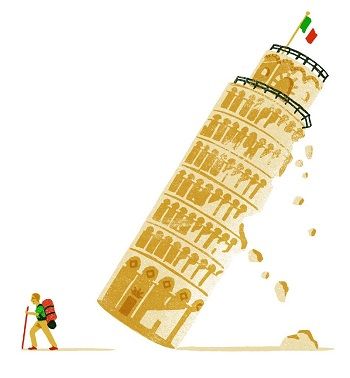 Now, 20 years later, Italian emigration has grown exponentially. Academic researchers are leaving in droves — along with many other people: designers, doctors, baristas, engineers, managers and carpenters. Italian emigration has become more and more multifaceted, and big. Though not as big as the epic Italian emigrations of the late 19th and early 20th centuries, when millions boarded ships bound for the Americas or far-off Australia, or took trains to the better-off lands of Western Europe, the figures are nevertheless alarming. And they don’t bode well for the nation’s future.

The one bright spot is that, in an interconnected world, leaving one’s homeland is not necessarily a permanent break. Keeping ties with the mother country is much easier than a century ago, and today’s emigrants can become a great resource. In order for that to happen, though, Italy needs to take the political steps to recognize their value and support its ties with expatriates.

Some 94,000 Italians moved abroad in 2013, almost double the number that left in 2007. Even more are expected to have emigrated last year. Moreover, the statistics reflect only those who have officially communicated their new addresses to the authorities. The unofficial count is estimated to be two to three times higher, according to Italian media reports. Low salaries (workers under 30 on average receive about 850 euros a month) and unemployment play an obvious role. As in other South European countries and in France, youth unemployment rates in Italy — despite some tentative signs of improvement — remain sky-high, about 42 percent, according to the latest figures, compared with 20 percent in 2007.

Most Italians began to feel the effects of the recession a bit later than other Southern Europeans, but the rise in Itay’s emigration rate seems to have been the sharpest in the last couple of years. From 2012 to 2013, Italians applying for a National Insurance Number — necessary for permission to work in the United Kingdom — rose by 52 percent, compared with a 40 percent rise in applications by Spaniards. In the same period, according to Reuters, the number of Italians moving to Germany rose by 39 percent, compared with a 30 percent rise of Spaniards.

Newly expatriate Italians, most of them young but some well over 40, are heading to other points in Europe or the Americas, Asia and even Africa, founding start-up companies in the United States or working as chefs in China. Their departure is met with indifference or resignation in Italy. The issue is hardly ever addressed by politicians. When Mario Monti hinted at it in his inaugural speech after being appointed prime minister in 2011, he actually encouraged emigration, praising the “mobility” of young Italians in the “European and global job market.”

Years of brain drain have paved the way to the idea, enforced by the current recession, that losing a substantial part of the country’s youth is normal. When young people talk about their plans to emigrate, they do so in a matter-of-fact way. The curious blend of attachment and indifference many feel for their country comes into play: They know that Italy is one of the world’s most resourceful countries, but the problems with living there — the bureaucracy, the corruption, the crushing taxes, the lack of social change — are so intertwined that they feel helpless. Caught in the grip of a long-standing collective depressive disorder, the country’s mood has yet to improve after the controversial labor reforms of Prime Minister Matteo Renzi’s government — which, by removing some job protections, has added to the insecurity of newly hired workers.

“We hope some of the young people who are leaving Italy will one day go back, taking with them the valuable experience of their living abroad,” Massimiliano Mazzanti, the Italian general consul in London told me. The Italian community in Britain is far from being as big as those in Germany or Argentina, yet it is growing quickly: Nowadays, Britain is the top destination for Italian emigrants.

“Life here is a jungle,” says the Sicilian-born director Luca Vullo, who is making a movie about Italians in London. “Yet it is a fair jungle, whereas Italy, unless you have the right connections, is a jungle with no chance of success.” Mr. Vullo is hoping for his movie to be the first part of a larger project, with more movies about Italian immigrants in New York, Sydney and elsewhere. Some of the stories he tells in his film are success stories. Others are about people who get lost. Thousands of young Italians, along with other European immigrants, end up feeding the city’s appetite for low-paid workers. Not all of them will find their way someday to a rewarding career.

The recent history of Italian youth has been quite turbulent: The protest movements in the 1960s and 1970s were among the toughest and longest in the Western world. Then came the sort of stupor of the Berlusconi era. Now comes the great escape. But could the new generation of emigrants somehow become a remedy for Italy’s malaise?

Expatriate Italians, be they in London, New York or Shanghai, no longer build Little Italys. Instead, they form a web of networking business connections, associations, think tanks and cultural activities with interlinking ties that often lead back home. This dynamic “other Italy” needs to be embraced by the homeland. It can produce more business and valuable new ideas. Yet in the last few years Italy has divested itself, economically and psychologically, from its expatriates. Italian Cultural Institutes are badly underfunded. Representative bodies like the Committee for Italians Abroad are in desperate need of reform.

Building a policy to support these links may not appear to be a priority for Italian leaders, but it is an essential answer to the huge flow of emigration. Reversing this flow may not be possible right now — but steps must be taken to prevent Italy’s expatriate citizens from becoming a total, irrevocable loss to their country.

Marco Mancassola is an Italian author and journalist who lives in London. He is the author, most recently, of Gli amici del deserto, a novel about two young Italian emigrants.