I spent most of the summer in Moscow, treading past kiosks stocked with T-shirts that read, essentially, “Bring on the sanctions.” In retaliation for financial constraints imposed by Washington and Brussels for Moscow’s incursion into Ukraine, which make foreign check card purchases deeply problematic, the Russian prime minister, Dmitri Medvedev, has barred the import of a wide range of American and European foods. The McDonald’s restaurant on Pushkin Square has been closed “for technical reasons.” And at the otherwise posh Bakhetle supermarket two teenage boys took pictures of Oreos; they had apparently been tasked with reporting the infiltration of enemy trans-fats to the authorities.

People are dying in Ukraine. Atrocities are being committed. But in Moscow, the conflict has an illusory, theatrical quality. President Vladimir Putin’s poll numbers are high and the crisis has served to focus attention on Russia’s true enemy: the United States. 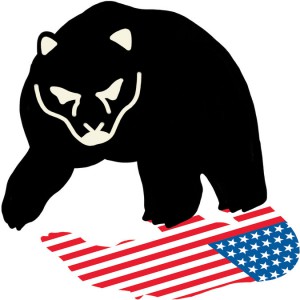 I heard an earful every day from my Russian friends and acquaintances who could not understand why America would interfere in a region that was once part of the Russian Empire and no doubt (from their perspectives) will be again. The battle over Ukraine, I was reminded by people in their early 30s up to their late 80s, comes as the consequence of NATO’s eastward expansion after the collapse of the Soviet Union, when Russia was on its knees. Mr. Putin drew his red line at the border between Poland and the Ukraine; the idea that NATO ships — American ships — would dock in the Black Sea ports of Crimea seemed unthinkable.

Remember that the Crimea has been a nexus for many of Russia’s wars over the centuries, including the one that it lost in 1856. To understand what is happening now — to understand President Putin — one needs to appreciate the historical consciousness of that humiliation. Mr. Putin fashions his rule after that of Nicholas I, which included imperial expansion, the crushing of an uprising, and the exploitation of the agitprop powers of the Russian Orthodox Church. Like Mr. Putin, Nicholas I liked to depict himself as a strongman, unfettered by the rationalist materialism of Western leaders.

All nations live in their own realities, and in Mr. Putin’s Russia, the truth and facts can seem overrated and old-fashioned. It is the task of the media to construct the illusions in support of the president’s imperial mission.

In Russia, most of the television channels are operated and overseen by the government, but the medium and the message are actually not all that different in Russia from elsewhere. The nostalgia for a Reagan-era American empire that dominates the right-wing media in the United States finds its counterpoint in the nostalgia for Soviet power among Russians. And each night, nearly identical arguments against the Obama administration are made on Fox News in New York and Channel 1 in Moscow.

The partisan rhetoric of Sean Hannity, Megyn Kelly, Bill O’Reilly and other Fox commentators provides talking points for the Russian news programs “Vremia,” “Vesti” and “Sevodnia.” Russians despise the policies of the United States government, and the program “Fox & Friends” makes it seem clear that Americans do, too.

That Mr. Putin should indeed be the “president of the world,” as one liberated Crimean resident bellowed on Russian television, is supported by the admiration expressed for him by Kimberly Guilfoyle on the Fox News talk show “The Five.” In a swipe at President Obama last month, she expressed the wish that Mr. Putin or Benjamin Netanyahu could rule the United States, even if just for 48 hours, to get things “done right.” It would be a grotesque exaggeration to say that Roger Ailes, the man who runs the Fox operation, has become the de facto voice of the Kremlin, but that is how propaganda works — through grotesque exaggeration. Plus a lot of repetition. And cheap graphics.

A Muscovite with a healthy memory of the Soviet experience reminded me that propaganda wars are not battles for the truth, but battles for the lie, for the more alluring, compelling falsehood. So that long convoy of unfilled trucks definitely brought humanitarian aid from Russia to Eastern Ukraine, thus preventing babies from going hungry. Of course rebels in Luhansk serve a greater cause than the soldiers from Kiev. “Demon,” “Shooter” and the other mercenaries in Ukraine absolutely treat their prisoners politely and professionally. They gave soup to their Ukrainian captives, and allowed them to call their wives on their mobile phones.

In some of the Kremlin coverage, the foliage looked a little out of season, and a lot of the video came from YouTube. I might dredge up a tired academic metaphor to compare Russian television to a funhouse mirror, except there is no fun to be had in Donetsk. I was supposed to visit that city of nearly a million people in Eastern Ukraine to give a lecture at the S.S. Prokofiev State Music Academy of Donetsk. The trip was postponed owing to the threat of kidnapping; last April, pro-Russian activists declared it a People’s Republic, separate from Kiev, and Westerners have not been welcomed. Even if I had ignored the endless emails from the State Department warning Americans not to travel in the region, visiting would have been difficult, since the Donetsk Sergey Prokofiev International Airport no longer operates. The terminal building is a charred ruin.

So I remained in Moscow, where, pointedly on Sept. 11 the opera season opened with a performance of Prokofiev’s “Semyon Kotko.” The opera’s hero is a soldier, a “son of the working people,” a veteran of the First World War, who must defend his fiancé, illiterate mother, little sister and his pig farm from marauding Germans. In 1939, when Prokofiev finished the opera, Stalinist cultural officials were busy mobilizing the public for a possible war against Hitler. But when the Soviets signed a nonaggression pact with Nazi Germany, anti-German attitudes were briefly taboo. That changed in 1941, when Hitler’s sudden invasion caught Stalin’s armies by surprise.

The composer, considered one of Russia’s greatest musical geniuses, was born in the Donetsk region of Ukraine. The recent staging of “Semyon Kotko” was inspired by the current conflict there. Like Semyon, Russian “volunteers” are being called to defend their land against aggressors from abroad: NATO. As graffiti on the sidewalk in front of the Intercontinental Hotel in Moscow explains, “U.S. and Brussel are sponsors of neofashizm [sic] in Ukraine.” The lie is something to be tread on.

Simon Morrison is a professor of music at Princeton University and president of the Serge Prokofiev Foundation.