Once a peninsula, Crimea has become an island. For nearly two years, the territory has been unrecognized, cut off from the mainland by a militarized border, embargoed and mostly forgotten by the international community and the media. The early optimism of some Crimeans that Russia would quickly integrate the peninsula and turn it into a showcase territory has evaporated.

Last year, the Russian writer Leonid Kaganov said that the annexation of Crimea was like stealing an expensive cellphone without its charger. He was proved right. The full scale of Crimea’s isolation became apparent recently: On Nov. 22, Ukrainian nationalists and Crimean Tatar activists sabotaged four power lines feeding Crimea with electricity from Ukraine, plunging the peninsula — and its two million residents — into darkness. This untenable situation has dragged on for over a month and even though power has been mostly restored, the overall state of affairs is still precarious.

Emboldened by the havoc of the electricity crisis, Ukraine’s prime minister, Arseniy P. Yatsenyuk, announced on Dec. 16 that his country would halt trade with Crimea by mid-January and leave future electricity supply an open question. 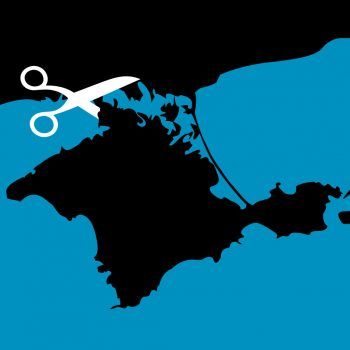 Crimea’s economy can hardly afford any more isolation. Although Russia raised pensions and salaries in the local government and state-run companies after annexation, these gains have been erased by high inflation, a weak ruble and soaring costs of basic commodities because of the disruption of regular supply routes. Many private businesses are in shambles and the sun-drenched tourist season along the coastline — a mainstay of the Crimean economy since Soviet times — has become a pale shadow of its former self.

The few foreign visitors these days seem to be hapless representatives of European fringe parties seeking publicity, old pals of the Russian president, Vladimir V. Putin, like Silvio Berlusconi, and dazed-and-confused celebrities like the veteran American boxer Roy Jones Jr. At the same time, Crimea has experienced an exodus of young professionals. Sick and tired of the island life, they have decided to seek better fortunes in Ukrainian cities like Kiev and Lviv or the big cities of Western Europe.

Geographically and politically secluded, blithely unaccountable to the outside world and sometimes even to Moscow, Crimea has become the perfect breeding ground for large-scale corruption, profiteering and human rights violations — a kind of black site, inaccessible to international monitoring organizations and beyond the reach of law. Crimea was run as a fief of local oligarchs and Mafia bosses for decades before the 2014 crisis, but the situation today is even bleaker, a result of rabid nationalism and divisive politics.

The Crimean Tatars, the indigenous minority that has consistently opposed Russian rule, have been especially hard hit. Russian authorities have seized the headquarters of their governing body, the Mejlis, banned two Tatar leaders from visiting the peninsula and refused to renew the license of the Crimean Tatar television channel. At the same time, prominent members of the community have been subjected to harassment and intimidation. The Crimean Tatar activists who blew up the power lines last month did so while calling for the release of political prisoners and the end of political repression.

What is the solution to the Crimean crisis? The authorities in Kiev, as well as many foreign governments, refuse to recognize the annexation of Crimea and insist that the peninsula return to within Ukraine’s borders. At the same time that Prime Minister Yatsenyuk promises to cut off trade, President Petro O. Poroshenko is suggesting that the prospect of Ukrainian visa-free travel to the European Union will lure Crimeans back into Kiev’s arms. It’s a carrot-and-stick strategy that aims to make the living situation in Crimea as bleak as possible, while presenting Kiev as a future beacon of light. These tactics have little chance of success.

On a visit to Kiev earlier this month, Vice President Joseph R. Biden Jr. announced: “The United States does not, has not, never will recognize Russia’s attempt to annex Crimea.”

But Russia has already annexed Crimea. The takeover of the peninsula was duplicitous, and the March 2014 referendum was hardly fair, but there is no turning back. Had Russia unofficially occupied Crimea, as it did with Moldova’s Transnistria and Georgia’s Abkhazia and South Ossetia, there might still have been hope. But anyone who believes the Kremlin will relinquish its claim on Crimea because of a blockade, or that a majority of Crimeans will peacefully agree to return to being Ukrainian citizens is delusional or a demagogue. Crimea may be a millstone around Russia’s neck, but it is also a crown jewel that it will guard at all costs. The peninsula will leave Moscow’s control only if the Russian Federation itself falls apart.

Many politicians recognize this in private yet do not dare say it out loud. Sooner or later, however, Ukraine and the international community need to come to terms with the facts. Keeping the peninsula in darkness and isolation, slowly strangling it, will certainly not deter Mr. Putin. It will only create another frozen conflict zone in the Black Sea region, allow criminal networks to flourish with impunity and provide convenient cover for continuing human rights violations.

Settling the fait accompli status of Crimea is still a political taboo. Kiev cannot easily forgive the violence that Russia has committed against eastern Ukraine. There are fears that recognizing Russia’s claim to Crimea would be construed as appeasement and could green-light the invasion of other regions in Russia’s “near abroad.”

But Crimea is a special case historically, geographically and politically. It is more than just a territory for Russia. It is part of a myth, a source of identity, a place that was once known as “the garden of the empire.” Understanding that Crimea’s return is the only nonnegotiable issue for Moscow, and accepting that politics is the art of the possible, opening international talks on the recognition of Crimea’s de facto Russian status may be the only realistic solution.

This may prove the most productive way to compel Moscow to fully cooperate on much thornier issues, like eastern Ukraine, and free Kiev to focus more fully on internal reforms. It could also lead to improvement of the human rights situation in Crimea itself by opening up the peninsula to the world (including monitoring organizations) and negotiating with the Russian government toward a strict and detailed road map for safeguarding the cultural and political rights of local minorities. Leaving the situation to fester in the darkness for another 10 or 20 years, turning Crimea into another Cuba, would not benefit anyone, Ukrainians, Russians, or least of all, Crimeans themselves.

Dimiter Kenarov is a freelance journalist covering the Balkans and the Black Sea region. His work is partly supported by The Pulitzer Center on Crisis Reporting.