The revolution that transformed Iran in 1979 was a grand experiment. From that moment on, Iran would be ruled by an ayatollah, a man with deep knowledge of Shariah, Islamic law. He would be the “supreme leader,” a euphemism for dictator. He would merit that authority because he would be regarded, literally, as God’s “representative on Earth.”

The first supreme leader was Ruhollah Khomeini, a charismatic, fire-and-brimstone cleric, an unwavering proponent of jihad against America and the West. When he died in 1989 the title went to Ali Khamenei who in no way moderated the regime’s ideology. On the contrary, he has called the Islamic Revolution the “turning point in modern world history.” 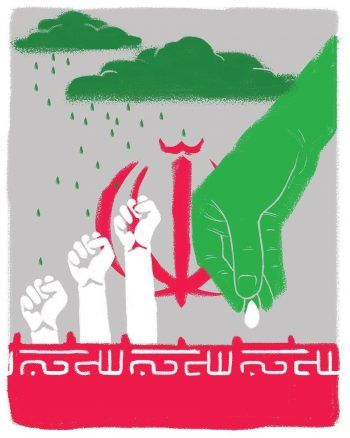 Today, the regime in Tehran influences Iraq, props up the Assad dynasty in Syria, controls Lebanon through Hezbollah, and backs the Houthi rebels in Yemen. Thinking longer-term, Supreme Leader Khamenei has a nuclear weapons program — perhaps delayed but certainly not ended by the deal President Obama concluded — as well as a program to develop missiles capable of delivering nuclear weapons. That program continues apace.

The pursuit of such ambitions has come at a cost. Iranians who had hoped they would enjoy more freedom and prosperity following the fall of the shah have been bitterly disappointed. Iranians who thought they would benefit from the tens of billions of dollars flowing to Iran since the nuclear deal — even more so.

Starting last Thursday, Iranians by the hundreds of thousands began expressing that disappointment along with rising anger — risking their lives by staging protests in more than two dozen cities across the country. As I write this, an estimated 21 protesters have been killed by government forces. Hundreds have been arrested.

Much of the Western media has downplayed this upheaval. Others have asserted that the protests are just about “a sluggish economy” and “an increase in the price of eggs” — in other words, apolitical and non-ideological.

The chants being heard in the streets tell a different tale. Among them: “We don’t want an Islamic Republic!” “Death to the Dictator!” “Mullahs Must Get Lost!” “The Clerics Act Like Gods!” Death or freedom!” “Leave Syria, think about us!” “Not Gaza, not Lebanon, my life for Iran!” Also this statement of grim determination: “We will die. [But] we will take back Iran.” No, it’s not just the economy, stupid.

Is another revolution brewing? When it comes to making predictions about such things, political scientists and intelligence analysts are on a par with astrologers. In truth, revolutions are like volcanos. No matter how much rumbling you hear, no matter how much smoke you see, you never know when they will blow.

A common misconception: The more oppressive a regime, the more it invites its downfall. Actually, revolutions are most apt to succeed against regimes reluctant to engage in wholesale slaughter of their subjects. As a general rule, ruthlessness pays.

And Iran’s theocrats — despite what we hear from their many Western apologists — are as ruthless as they come. The Islamic Revolutionary Guard Corps and the Basij militia have never been reluctant to bash heads. Iran has the world’s highest per capita execution rate. Those in power routinely torture dissidents, imprison human rights activists, rape women in prison, publicly hang homosexuals, take Western hostages — the list goes on.

The last time Iranians took to the streets to challenge their rulers was in 2009. They famously chanted a question to President Obama: Are you with us or are you with them? (They utilized a Farsi pun: “Obama, Obama ya ba oona, ya ba ma?”) Eager for detente with the Islamic Republic, Mr. Obama declined to reply.

It would be charitable to think of that decision as an experiment. The prevailing view among the foreign policy elite had long been that Iran was an essentially “normal nation” whose leaders favored “stability” in the region; that they were proud men who felt disrespected. If Mr. Obama were to extend his hand in friendship, surely they’d unclench their fists.

We now know the results of the experiment. The foreign policy elite was wrong and those few analysts who saw Iran’s theocrats as an unappeasable enemy were right.

Over the weekend, the State Department condemned Iran’s rulers for having turned “a wealthy country with a rich history and culture into an economically depleted rogue state whose chief exports are violence, bloodshed, and chaos.” Mr. Trump tweeted that the “entire world understands that the good people of Iran want change.” Sen. Tom Cotton and Sen. Ted Cruz were among the Republican lawmakers who issued strong statements.

On the left, support for the rights and aspirations of the Iranians was less robust. Why? Those who identify as the “resistance” won’t agree on anything with Mr. Trump. More moderate Democrats and progressives may not want to be seen as implicitly criticizing Mr. Obama’s inaction in 2009 and his 2015 JCPOA. Nor are they eager to join with Republicans on what should be the next step: measures to support the demonstrators and exert serious new pressures on Iran’s rulers in order to restrain their repressive instincts.

As for Mr. Obama himself, he has not, as I write this, responded to an online letter asking him “to send a strong and public message of compassion and solidarity” to Iranians demanding their human rights.

If he were to do that, and if, before too long, modern jihadism were to collapse in the land where it first became the ruling ideology, a new experiment would begin — one enormously consequential for issues of war and peace over the decades ahead.

Clifford D. May is president of the Foundation for Defense of Democracies and a columnist for The Washington Times.