It is widely accepted that the Greek bailout and austerity package has led to wealth flowing from Greece to its European creditors, benefiting foreign banks at the expense of Greeks, that its debt is unprecedented and unsustainable, that its recession is the unprecedented result of reforms that cannot succeed, and that Greece’s exit from the Eurozone would be calamitous.

Amazingly, none of the statements above are strictly true, leading much of the public discussion of Greece to be unusually detached from the facts.

In this article, I outline my reasons for no longer believing these claims – which I had been led to believe were true when I began to try to understand the Greek debt crisis. This is not meant as a comprehensive guide: I do not presume to make policy recommendations, but do hope that it will help readers better understand some of the issues at stake.

1. The bailouts have extracted resources from Greece

A common belief in discussions of the Greek economy is that the eurozone “has become an extractive project that imposes austerity on poor nations in order to collect debts on behalf of rich ones”. A recent study of capital flows to and from Greece by economists Jeremy Bulow and Kenneth Rogoff debunks this. As the tables below show, capital flows into Greece have not just remained positive, but have increased since the first bailout in 2010. 2014’s flow is slightly negative, partly as the Greek government chose to miss reform targets, preventing release of bailout funds.

Another misconception is that: “It is not the people of Greece who have benefited from bailout loans … but the European and Greek banks which recklessly lent money to the Greek State.” This was the charge of the Jubilee Debt Campaign, which campaigns for further debt relief for Greece. They report that €252 billion has been lent to Greece by the “Troika” (the EU, the European Central Bank and the IMF) since 2010, which they claim has been used as follows:

These add up to €232 billion, causing Jubilee to conclude that “less than 10% of the money has reached the people of Greece”.

This conclusion incorrectly assumes that none of the recipients of the €232 billion are “people of Greece”. But if the “sweeteners” were for the Greek private sector, they benefited Greeks; bailing out Greek banks directly helps Greeks who have bank deposits, who hold shares in banks (whether directly or via their pensions), and who work for banks.

The best data that I’ve seen suggests that Greek banks may have held just under half the Greek government debt before the 2012 restructuring – twice as much as any other country. Thus, payments to creditors also reached Greeks. Finally, even payments to foreign creditors benefit Greeks by removing obligations from Greeks to pay.

Perhaps the most amazing estimate to come from Bulow and Rogoff’s study is that Greek citizens have “withdrawn over a hundred billion euros from the banking system” since 2010: where has that money gone?

Japanese prime minister, Shinzo Abe, has said he will work with the G7 and other Asian countries to ensure economic and financial market stability as the eurozone grapples with Greece’s debt crisis. This news is unremarkable and unsurprising: the third-largest economy in the world is standing by to help. Unreported is that Japan has the world’s highest debt-to-GDP ratio, at about 240% – much higher than Greece’s.

Furthermore, Japan does not seem to have any easy measures for quickly reducing this: unemployment is already low, leaving little slack in the labour market. And, as one of the world’s least corrupt countries, its unofficial sector is small, leaving little hope that actual GDP is much higher than official GDP. Japan faces serious economic challenges (including two decades almost without growth), but no one sees it as other than stable.

By contrast, there are many ways that Greece could quickly reduce its debt-to-GDP ratio: its unofficial economy is estimated at 25% of its official economy; while some officially unemployed Greeks may be working unofficially, many are not – so labour market reforms could spur rapid growth.

There’s an open debate on how to interpret debt-to-GDP ratios and higher numbers are certainly worrying. Yet, Japan suggests there is no magic number: how a country can manage its debt depends on the circumstances and choices of that country.

The graph below shows real GDP as a percentage of 1989 GDP in post-Soviet transition economies. Produced by economists Nauro Campos and Abrizio Coricelli, it shows that going through a political and economic transition simultaneously, without a coherent reform strategy, can be disastrous for economic growth. After the collapse of the Soviet Union, post-Soviet countries suffered decreases in official output for years, in spite of international support, including help from the European Bank for Reconstruction and Development. Twelve years after 1989, only six of the 25 countries had official GDP figures above their 1989 levels. 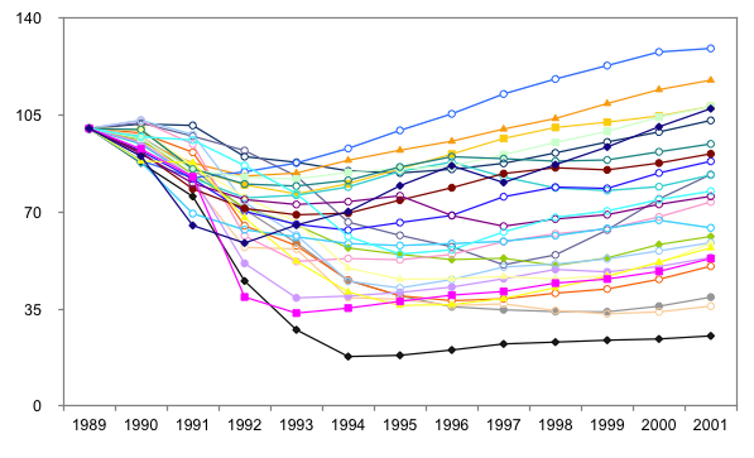 Greece’s political transitions between democratically elected governments have been less fundamental than the post-Soviet transitions, but its commitment to reform has been questionable throughout. Its poor performance in privatisating inefficient state-owned enterprises has drawn particular attention: the following graph shows privatisation not only well behind schedule, but falling further behind all the time. This deprives the Greek state of revenues, and the Greek people of more efficient services. 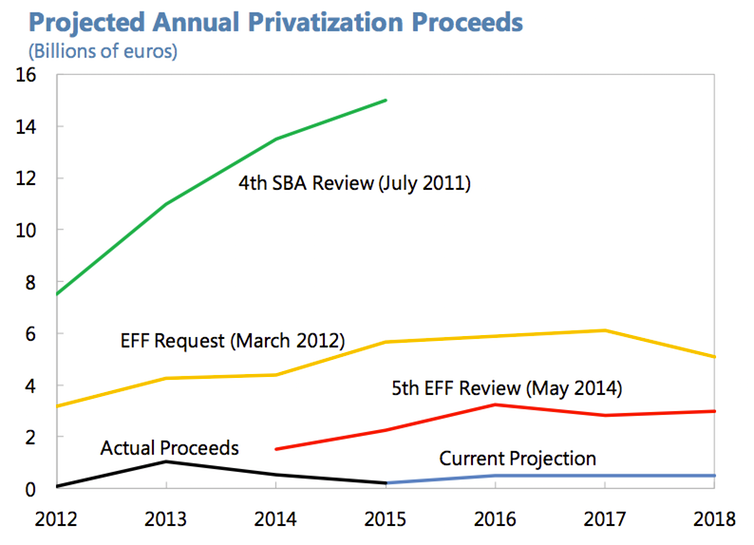 Greece finally seemed to have turned back up in 2014: having fallen by about 20% since its peak in 2008, real GDP grew, officially ending the recession; the government balanced its books before debt payments, and had earned a primary surplus in 2013; unemployment fell; the government was able to borrow on the regular markets, rather than via support packages.

Thus, one of the tragedies of the present situation is that protracted negotiations over the country’s bailout conditions may have just increased the overall cost of the transition process.

5. Greece is too big to fail

The idea that Greece is too big to fail and will have significant knock-on effects for global financial markets has been used in some of the brinkmanship at play in the country’s debt negotiations – including by former finance minister Yanis Varoufakis.

But, while the Greek debt crisis has increased uncertainty and any further default or uncontrolled exit from the euro will pose costs, the markets do not seem terribly roiled by the prospect of its default. This is not surprising: Greece makes up about 2% of Europe’s population and GDP; Europe’s economy is stronger than it was in 2010-2012.

An underappreciated aspect of the “too big to fail” idea is what it does to an economy’s prospects. Indeed, one of the leading explanations of Soviet economic decline is the “soft budget constraint”. Soviet firms tended to be much larger than their Western counterparts, giving each considerable power to renegotiate its production plans – without more resources, it could threaten to harm other sectors in the economy, which had few alternative suppliers to turn to.

This seems to be the concern expressed by many of the other European countries: at the eurozone’s inception, the open question was whether the Bundesbank’s credible, low-inflation, low-interest rate standard would prevail. Or whether the eurozone would end up converging on one of the less credible, high-inflation and high-interest rate standards. If the moving appeals of a country comprising 2% of Europe can successfully soften Europe’s budget constraint, then it can be expected that any larger country will be able to as well, if they can demonstrate a severe enough crisis.

All the major actors seem committed to trying to retain Greece’s membership in the eurozone. Were Greece to become the first country to leave the eurozone, however, it would give us invaluable real experience in a fairly controlled context; this would improve eurozone policy when faced with similar situations in the future.

Colin Rowat is a senior lecturer in Economics at University of Birmingham.