Flaring is a significant source of economic and environmental waste. Except when safety-related, flared gas can often be captured and monetised using low-cost proven solutions.

In doing so, governments can improve health and safety, reduce emissions (of carbon dioxide, methane, and particulates) and add value by driving up revenue, increasing reserves and production, creating jobs and improving the industry’s ‘social license to operate’.

Flare capture also helps countries to deliver on the Paris Agreement and the UN’s Sustainable Development Goal #13 while, for example, providing affordable alternatives for heating and cooking.

The Middle East and North Africa (MENA) region accounts for 40% of the world’s flaring. In the region, flaring has increased year-on-year - apart from 2018 - to almost six billion cubic feet of gas per day, generating up to 300-500 million tonnes of CO2-equivalent emissions per year.

These emissions result not only from the combustion of gas, but also from the venting, from inefficient flares, of un-combusted methane, a more potent greenhouse gas. Yet much of this is avoidable.

There are many commercially attractive options to reduce flaring in MENA. The key is to use the right proven technology and to be agile in commercial structuring. And the prize could be a boost to MENA’s annual revenues by up to $200 per second (up to $6.4 billion per year) by delivering wasted gas to market by pipeline, as power or in liquid form. 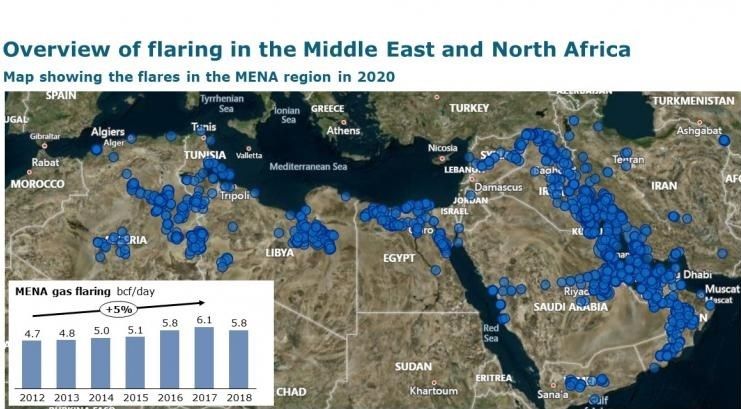 The chart highlights the abundance of flaring across the MENA region, and in many cases, their proximity to population centres. While Iran, Iraq, and Algeria generate 75% of MENA’s flaring, Saudi Arabia, Kuwait, UAE and Qatar are notable for their relatively low ‘flaring intensity’ i.e. flaring normalized to oil production.

In today’s world of lower energy prices, it makes sense to monetise every molecule. Even more so for national oil companies, which are responsible for most of the flaring, since they are not only the custodians of their countries’ natural resources, but they also generate a dominant source of government revenue.

Most oil producers in MENA have already made commitments to the World Bank’s flaring-reduction initiatives (e.g. ‘Zero Routine Flaring by 2030’), but to date, delivery is mostly lacking. Three main issues have hindered progress.

Firstly, operators, regulators, and governments highlight that flaring is often not ‘sufficiently on the radar’. Flaring is often underreported if not ignored or denied - although satellite detection gives unavoidable transparency. In MENA alone, more than 1,700 flare clusters are visible every day from space.

Secondly, flare capture is sometimes not perceived to be economically viable due to costs, taxes, or inappropriate technology. Thirdly, there are often issues around resources, especially concerning management bandwidth, delivery capabilities or financing.

Yet these issues can be solved if the right proven technologies are combined with the right commercial structures. To accelerate flare capture projects, stakeholders in the MENA hydrocarbons sector must consider several complementary, action-oriented initiatives.

In particular, they should:

The industry needs to prepare for a greener world after COVID-19 and investors and consumers are demanding cleaner fuels. Since gas is widely viewed as a transition fuel, MENA governments and stakeholders must work to eliminate its wastage and seize the revenue, production and environmental opportunities that flare capture projects offer.

There is much new leadership in the region in government and critical institutions with new mandates for change. The time to act is now.