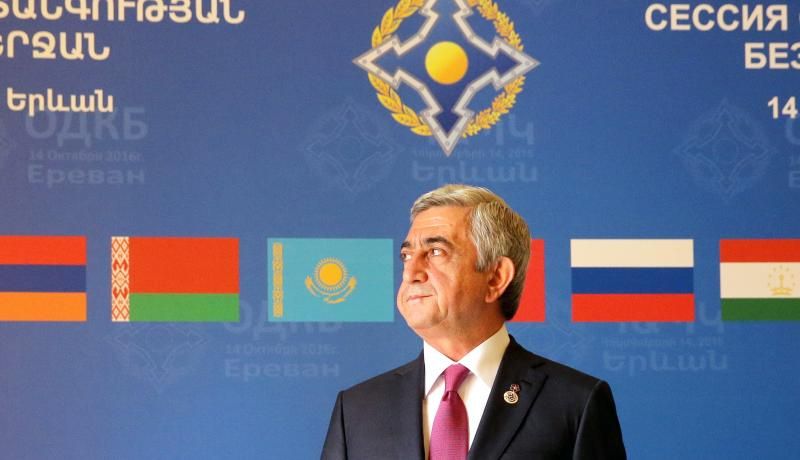 Similar to other Eurasian regional groupings, the Russian-led Collective Security Treaty Organization (CSTO) is an alliance of inconvenience at best. But for Armenia, which seeks a security umbrella – and for the South Caucasus region in general – the failure of the CSTO has broader repercussions. The organization’s failure to act as a coherent military bloc might become the failure to prevent the next war in the Caucasus.

The contradictions inherent in the CSTO were brought to light in December, when the member states – Armenia, Belarus, Kazakhstan, Kyrgyzstan, Russia and Tajikistan – failed to agree on a secretary general to replace the Russia incumbent, Nikolay Bordyuzha. The position was set to rotate to an Armenian candidate, but this was postponed until April when the presidents of Kazakhstan and Belarus failed to show up to the organization’s October and December 2016 summits respectively, preventing the gatherings from achieving a quorum.

This has added to the suspicion that Belarus and Kazakhstan prioritize special ties with Azerbaijan over their more formal alliance with Armenia. Yerevan has been frustrated in recent years with CSTO allies selling weapons to its rival (and non-member), as well as a lack of reaction to military incidents along the Armenia–Azerbaijan border.

These suspicions were further stoked following a reported military incursion on 29 December. While Armenia and Azerbaijan each blamed the other for the incident, an Azerbaijani soldier’s body retrieved in the territory of Armenia supports the claim of an Azerbaijani foray into Armenian land. The outgoing Russian secretary general seemed to side with Armenia, condemning the incident as ‘a provocation’. But he stepped down days later, and the statement was not echoed by other CSTO members.

In any future clashes between Armenian and Azerbaijani forces, an Armenian secretary general would be expected to adopt a more hardline stance. This is something Belarus, Kazakhstan and even Russia fear – to say nothing of Azerbaijan.

But the irony is that while the CSTO is trying to avoid getting involved in the Armenian-Azerbaijani conflict, its dysfunctionality might still drag it into the ongoing Nagorny Karabakh dispute. Though that dispute falls outside the CSTO’s purview, its failure to act as a deterrent against recurring violence along Armenia–Azerbaijan border adds to the negative dynamics around the conflict and increases the overall insecurity of the region. Moreover, there is a high risk that escalation between Azerbaijan and Nagorny Karabakh could spill over into Armenia, calling for a CSTO response.

In addition, Russia’s attempts to position the CSTO as a counterbalance to NATO could further antagonize Armenia. The country is trying to balance its defence ties between the two blocs, and is the only CSTO member contributing to NATO peacekeeping operations. Were relations between the two blocs to get openly confrontational, it would be a real challenge for Yerevan to manoeuvre between the two.

The truth is that the CSTO is a ceremonial component of Armenian-Russian bilateral relations; it is the military alliance with Russia that is supposed to count for Armenia’s security. This begs the question as to whether the political, financial and human capital Armenia has invested in the CSTO is worth the cost of being stuck in such a dysfunctional and ineffective military bloc. For the sake of itself and the region, a rethink in defence policy may be in order.

Anahit Shirinyan is an Academy fellow with the Russia and Eurasia Programme.