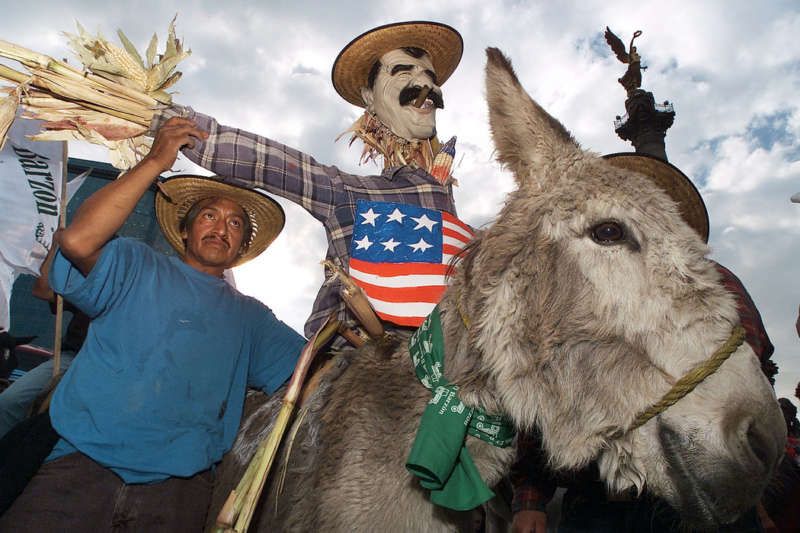 In this industrial city near the Mexican capital, workers gather outside the gates of a sprawling Chrysler plant for a late shift assembling Dodge Journey S.U.V.s. It’s a sought-after job, with autoworkers in Mexico earning an average of about $5 an hour, compared with the nation’s minimum wage of less than $4 for the whole day. Yet it is a fifth of what autoworkers make in Detroit, and that has helped Mexico become a global powerhouse in car production. The finished products can be seen in the parking lot: thousands of shiny new S.U.V.s, black, white, silver, red, waiting to be shipped around the planet, particularly to the United States, where Americans bought 100,000 Journeys last year.

Scenes like this are at the heart of the populist, anti-trade rage driving Donald J. Trump’s presidential campaign. His central promise: to rewrite or scrap the 22-year-old North American Free Trade Agreement, which he blames for sending countless jobs overseas.

And while Hillary Clinton knocks most of Mr. Trump’s positions, she has echoed this one. “Too often past trade deals have been sold to the American people with rosy scenarios that didn’t pan out,” she said in a speech near Detroit. The president of the United Auto Workers, Dennis Williams, said she promised him that she would renegotiate the deal.

How these attacks on trade translate into policy is one of the most important questions to come out of this election. The Nafta-bashing rattles Mexican businesses in a nation that has built its economy on the accord and depends on commerce with its northern neighbor for a third of its income. Last year, Mexico exported $316 billion worth of goods and services to the United States, a sizable chunk of the country’s gross domestic product of $1.1 trillion. Amid the election, some companies have delayed related investments, a Mexican financial newspaper reported. And when Mr. Trump goes up in the polls, Mexico’s peso sinks in value.

While Mexican leaders mock Mr. Trump’s demand that they pay for a border wall, they have taken his calls to renegotiate, if not scrap, Nafta more seriously, especially as their leader has done little to push back. In July, President Enrique Peña Nieto held a news conference with President Obama in which he said there was space to “modernize” and “update” the agreement. And last month, he raised no objections when Mr. Trump stood in Mexico’s presidential palace and promised a rewrite.

Nafta is not, however, universally beloved in Mexico, and the presidential candidates’ anti-trade talk has reignited criticism of the treaty, with some opponents claiming, among other things, that it devastates Mexican agriculture by flooding the country with cheap American corn. In August, tens of thousands of small farmers gathered in Mexico City with demands that included the redrafting of Nafta — a move that Mexico’s economy secretary, Ildefonso Guajardo, has warned could open a “Pandora’s box.” Indeed, the prospect of a revised Nafta has pundits weighing in with calls to put everything from energy to immigration into a new draft.

In July, the polling company Buendía y Laredo asked Mexicans if they would like to leave Nafta altogether. A solid 52 percent said they were against a “Mexit” from the trade bloc, but it was significant that 33 percent said they favored an out, despite how many jobs depended on it. The survey showed similar attitudes to those in Britain toward the European Union; those with the least education were the most against Nafta; college students were the most in favor.

Nafta politics are as complex south of the border as they are in the north. Its advocates see it as a cornerstone of Mexico’s opening to the world; its detractors, as a neoliberal tool of imperialist gringos. Some credit it — or blame it — for most of what has happened here over the last two decades, from the country’s moving to a multiparty democracy, to millions trekking to El Norte, to violent drug gangs ravaging border towns.

With the United States economy 10 times the size of Mexico’s, the effects of Nafta are far greater on this side of the river. It has physically reshaped Mexico’s landscape, from its growing industrial cities to its emptying farming villages. It rocket-boosted trade between the countries, from $104 billion in 1994 to $583 billion last year, representing everything from sparkplugs to airplanes to Christmas trees. Thanks to Nafta, Mexico has become the biggest carmaker in Latin America, overtaking Brazil in 2014.

But despite these gains, the Mexican economy is sluggish compared with that of developing countries such as India and China. It has grown by an average of 2.5 percent a year since Nafta, a similar level to the decade before it, and below that of the boom years of the 1960s.

Holding a magnifying glass to Nafta reveals other nuances. Mr. Trump likes to point out that Mexico sells more than it buys from the United States, by $58 billion last year. But many of the companies exporting from Mexico are American-owned, so much of the profit goes back north. Chrysler opened its factory in Toluca all the way back in 1968, aiming for the Mexican market, then invested $1 billion more in it in 2006 when it had access to American car buyers. And while American corn does flow south, Mexico exported more farm goods to the United States than it imported last year. Small farmers here may be losing out as much to large Mexican ranches as they are to American agribusiness, especially those small farmers harvesting the millions of avocados that Americans scarf up in their game-day guacamole.

These nuances illustrate how interconnected the North American economy has become, and how difficult rewriting Nafta would be. Perhaps politicians will use the opportunity to add provisions on labor and the environment to the agreement, a longstanding demand by critics that could have a positive impact. But a major renegotiation that would satisfy the autoworkers, small farmers and other aggrieved groups in both countries would be a herculean task — assuming the next American president really goes there, whatever he or she promises at election time.