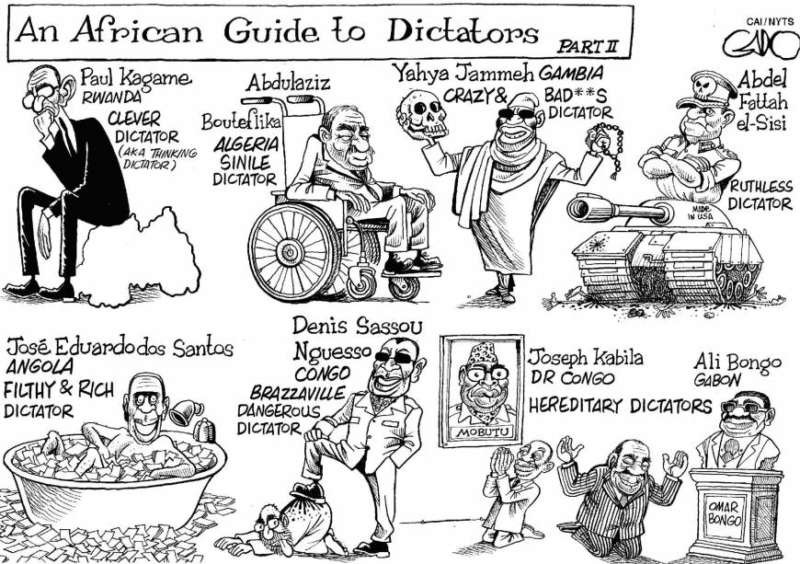 “We will win the biggest landslide this country has ever seen,” said Gambia’s president, Yahya Jammeh, before the small West African country’s recent election, and he had every reason to be confident. Jammeh had been in power for 22 years, and he knew how to run an election.

There was not the slightest indication that Jammeh was ready to surrender power. He said he was “proud to be a dictator,” promised to bury the “evil vermin called opposition 9 feet deep,” and once declared that he would rule “for 1 billion years if Allah wills it.” But when the marbles spoke last Friday morning, he had lost the election.

In Gambia, they vote by dropping marbles into different-colored drums, and when they were all counted an obscure property developer named Adama Barrow had 45 percent of the marbles. Jammeh had only 36 percent.

So he was guilty of over-confidence and poor election management, but nobody imagined that he would actually go quietly. Yet he did.

On Friday, Jammeh went on television and conceded defeat, saying, “I want to make it very clear that I will never rule this country without your mandate and I will never cheat.” The astonished head of the electoral commission, Alieu Momar Njie, said that “it’s really unique that someone who has been ruling this country for so long has accepted defeat” and Gambia exploded with joy.

Jammeh was always erratic, but nobody saw this coming. Africans elsewhere who also have a problem with rulers who overstay their welcome were delighted. “Yahya Jammeh has recognized his defeat! Who would have thought it? There is hope!” said Fred Bauma, the youthful leader of a nonviolent pro-democracy movement in the Democratic Republic of Congo. (He has been in detention for the past year.)

Hope soared even higher when Angola’s president, Eduardo dos Santos, declared hours after Jammeh conceded defeat that after 38 years in power he will step down next year. Even 92-year-old Robert Mugabe, who has ruled Zimbabwe since 1980, was heard to speak last week about retiring “properly” (although with no date mentioned).

Now for the (rather discouraging) small print. Barrow has good intentions, but many of the ambitious people in the coalition of small opposition parties that he put together may approach their time in power in the spirit of that famous Kenyan phrase, “It’s our turn to eat now.” As Lord Acton famously remarked, “Power tends to corrupt.”

Eduardo Dos Santos first said he was going to leave the presidency in Angola in 2001, but then it slipped his mind. He seems more genuinely committed to quitting this time, but Angola is a one-party state and he has already announced his successor, Defense Minister Joao Lourenco. “Absolute power corrupts absolutely,” as Lord Acton added.

And Mugabe, who spent a decade in jail while leading the independence struggle and has run Zimbabwe ever since, resorts to violence when challenged politically and has completely destroyed his country’s once promising economy. He may occasionally talk about retiring, but he will hold onto power until he dies. “Great men are almost always bad men,” as Acton concluded.

Even when elections are not rigged, it is sheer fantasy to believe that the outcomes are determined by voters who carefully considered all the options and chose the one who was best for the community.

Most people are far too busy with their own personal lives to give political matters much thought. When they do vote, they tend to be guided by their emotions or by their class, ethnic or religious identity. As Beppe Grillo, leader of Italy’s populist Five State Movement, cynically urged Italian voters in the recent referendum: “Vote with your gut” (and not with your brains).

Africa is not alone with this problem. Even in older and richer democracies, democratic decision-making is often irrational and sometimes self-destructive. So why bother?

Because governments must be changed from time to time if they are not to become completely self-serving, and elections are a better way to change them than military coups or violent revolts. Because democracy requires and strengthens the rule of law. And because of the “wisdom of crowds”: The voters get it right, or at least partly right, more often than any narrower decision-making group.

Gwynne Dyer is an independent journalist whose articles are published in 45 countries.