I came to the United States in 2019 as a scholar-at-risk fellow at Harvard University. After I was kidnapped and tortured in Nigeria for being gay and daring to speak openly about it America offered me refuge. But this spring after videos of the killings of Ahmaud Arbery and George Floyd surfaced, I’m coming to terms with the fact that the country that promised me safety is one where Black men like me face a different kind of danger.

Each time I tell someone why I’m here, the sad irony of it hurts like a gut punch. I’ve traded one perilous identity — being gay in Nigeria — for yet another one: being a Black man in America. The anguish cuts deep into the bones.

Growing up on the other side of the Atlantic, I was well aware that in America, Black masculinity is pathologized and the Black presence relentlessly policed. The story of Martin Luther King Jr. is often read side by side with the story of Eric Garner. You can’t idolize Barack Obama and not shudder at the tragic murder of Michael Brown by a white police officer in Ferguson, Mo. The glory of America is global, and so is the struggle of its Black citizens.

And yet, somehow, I managed to believe that my queer identity would protect me. Not because it offered any immunity against racism, but because I still have on my body the fresh wounds I suffered on the front lines of L.G.B.T.Q. activism in Nigeria. I thought: If there is any justice in this world, I’d be spared the fraught realities of another marginalized existence. I thought: Surely, my masculinity, considered too tenuous and inadequate in Nigeria because of my sexual orientation, cannot be considered threatening in America.

But here in America, masculinity added to melanin multiplies into something monstrous — in the white imagination, that is.

The cops who threw me against the car and patted me down during my second week in the United States almost certainly weren’t thinking the Black men they saw driving along the interstate could be lovers trying to maximize the warm lights of a waning summer day. Instead, what they saw were just two Black men who were speeding either to or away from crime. 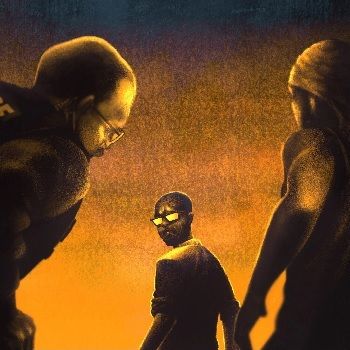 There are serious problems with policing in Nigeria as well — recent activism has brought the extreme abuse that occurs there to the world’s attention. The difference is that at home, police brutality is not set off by racist stereotypes. Also (and most important), America prides itself on being a global defender of human rights; Nigeria’s track record in that regard is merely modest when not abysmal. I expected better here.

And of course, law enforcement officers aren’t the only Americans who believe in racist stereotypes. When the white attendant at the drugstore in Harvard Square trailed behind me after I scanned a shelf of high-end cosmetics, I imagine she saw a Black man obviously up to no good. From that and other similar encounters, I learned that can I help you? when directed to a Black man in an establishment is no more a question than a polite route to surveillance.

To explain to me why white people crossed to the other side of the road during the seven minutes it took me to walk home at night from my office at Barker Center, why they clutched their purses tightly, my white colleague said: “Maybe it’s your boots, your stride: You know, you’re Black. You should work on your appearance a bit, you know.”

But I was already exhausted by the time I arrived here from Nigeria. As an openly gay man there, my boldest priority each time I stepped out of the house was to return home alive. As a Black man in America, that has not changed.

My country was no place for a teenage boy like me, who was gay and camp. Or put more truthfully: I was a social oddity, a threat to a raging brand of toxic masculinity. Fitting in, indeed surviving, forced me to re-engineer my body and learn novel ways of navigating daily life on the streets. My choice of clothes, shoes, my body language — all of those marked one as either a not-to-be-messed-with passer-by or a punk ripe for picking on.

One Saturday afternoon when I was 13, my brother took me to a gym equipment store in Aba, in southeastern Nigeria, to shop for weight lifting gear. After haggling with the hunky middle-aged owner who spent the entire time teasing me for my “girlie” frame, he paid for two five-pound dumbbells, and we rode the bus home. The dumbbells were for me.

I had just moved to the city to begin studying at a rowdy all-boys technical school. At the end of my first week there, I came home with multiple bruises and a new name, Chinelo — an Igbo name given mostly to girls. Aba, Nigeria’s most resilient commercial nerve center was notorious then for its gangs, a bloody vigilante group, and rampant street violence. My brother worried that I might not survive.

Beside buying me weight lifting equipment and ensuring that I trained on it, he also got me Timberland boots and Caterpillar sandals with toothy soles and exaggerated heft. Soon I traded my tight khaki shorts for baggy jeans and wore baseball caps each time I stepped out of the house. Although this artifice, especially the boots, became a signature part of my wardrobe, it didn’t do much to protect me from the rampant and violent homophobia in Nigeria.

The problem with code-switching, with dressing-to-fit, is not that it just does not work (the evening I was abducted in Nigeria I was wearing Caterpillar steel toe boots), it shovels the moral responsibility onto the shoulders of victims of thoughtless bigotry. It asks that Black men, for example, tweak their appearance to lull the neurosis of agitated white people. It asks that queer folks (in the case of Nigeria) go on laboring for a society that will never pause to reckon with its tacit terrorism.

I’ve tuned into this frequency of unsolvable social terror since the age of 13, constantly oscillating between self-defense and self-erasure. At 27, I’m thoroughly fatigued.

Worst of all, cultural context differs from country to country. Most social cues I absorbed to protect myself in Nigeria might implicate me in America. For example, putting my hands in the pockets of my pants was a mechanism I used in the old world to prevent myself from gesturing too much. In America, this is among the top behaviors to avoid when stopped by the police. It would mean you were trying to retrieve a gun. It would mean the cop was only defending his life. Everything after that would be in the past tense, including your life.

The same week the video of the shooting death of Ahmaud Arbery as he jogged near his home in Georgia — which amounted to a lynching — was posted online, a different video detailing yet another horrific killing of a gay man a few miles from my hometown in Nigeria was sent to my inbox. The two videos banged against the trajectory of my journey. While one pointed to the trauma of a destiny I escaped by a hair’s breadth; the other revealed the horrors of the present — both raw and potent with destruction. They’ve hammered cracks in my belief in a world where I’m not bending into the shape of prey.

Chibuihe Obi Achimba is an M.F.A. candidate at Brown University.