In 1947, my 40-year-old grandfather left his comfortable teaching position in Guangzhou, in southern China, to search for a job in Hong Kong.

Two years later, as civil war raged in China, my grandparents and their seven children packed into a crowded train filled with refugees fleeing to Hong Kong, the war-ravaged British colony still struggling to recover from the Japanese occupation. They were among the hundreds of thousands of people escaping to Hong Kong in the months before the Communist Party took control of China in October 1949.

During the past century, mainland Chinese people have gotten used to leaving their homeland. Many left in desperation — some in search of better job opportunities, while many others emigrated to escape the political tumult that has plagued our history. Hong Kong, which the British handed back to the Chinese in 1997, has been a common refuge. Between 1950 and 1980 hundreds of thousands of people came here from the mainland. 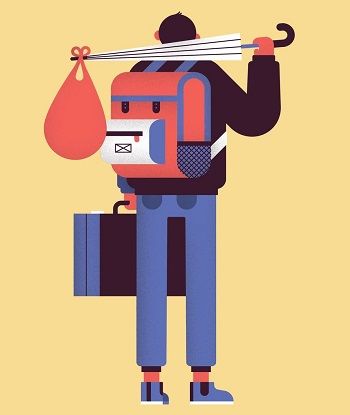 But recent political turmoil in Hong Kong has prompted many people here, including my family and me, to consider moving away. Hong Kongers no longer see their home as a safe haven from mainland politics.

A survey conducted last summer by the Hong Kong Federation of Youth Groups, a nongovernmental organization, just as the political tensions between Hong Kong and Beijing were heating up, found that 62 percent of people ages 15-39 want to leave — by far the highest number since its first poll in 1997.

An immigration consultant told me that in the closing months of last year, during the heat of the pro-democracy protests, he received triple the normal amount of inquiries about moving abroad — the majority of them being middle-aged parents anxious about their children’s future.

A friend of mine, a mother of two in her 40s, said she can no longer stand Hong Kong’s soaring property prices, deepening inequality and increasingly muzzled press, and feels there is little ordinary citizens can do about these problems. After Beijing took no heed of the pro-democracy protesters’ demands in the autumn, she made up her mind to emigrate.

It’s not the first time Hong Kongers have felt compelled to leave. In the 1980s, many of those who had been comfortably distant from the mainland’s problems started to worry about the looming return to Chinese rule in 1997.

Worry turned into panic in Hong Kong in June 1989, when the Chinese government opened fire on student protesters in the Tiananmen Square pro-democracy movement. In 1990, the year after the massacre, some 62,000 Hong Kongers, or about 1 percent of the population, emigrated. The wave continued in the following years.

The Tiananmen crackdown unnerved my family and prompted some to take action. My own parents and most of my aunts and uncles left in the early 1990s.

“A regime that kills its own young people — that’s just too scary,” said one of my aunts, who had two young children at the time. They moved to Australia; other relatives went to Canada, New Zealand and Britain. My parents, already in their 50s, gave up their stable jobs and went to Britain, where I was attending a university.

Much of my family, especially in my generation, returned to Hong Kong years later after having acquired citizenship abroad. Most of us prefer to be closer to our cultural roots, and there were more job opportunities here. The general thinking was that if anything awful happened, with a foreign passport in hand, we could all flee again.

That time has come. Beijing’s refusal to grant genuine democracy to Hong Kong — it insists on screening candidates for Hong Kong’s “election” for the city’s leader in 2017 — and its hostility toward people clamoring for free elections, plus its avowed determination to instill a sense of patriotism among our children, makes many Hong Kongers, especially parents like me with young children, nervous.

I dread the idea of my children growing up in a society where the values of Hong Kong — such as the rule of law, freedom of press, speech and assembly — are being eroded.

More and more, we feel Hong Kong is becoming just another Chinese city. Since the start of the Umbrella Movement in late September, we have seen the police using tactics against activists that resemble those used in China to prosecute critics of the government.

I don’t want to tell my children my worry that if one day they take part in demonstrations or post critical comments online, the police might take them away.

Most Hong Kongers can’t just pack up and leave. Although I have a British passport, moving away isn’t what I want. I chose to return to Hong Kong just months before the handover in 1997. I was genuinely proud that this city would no longer be a colony and believed that as China became more open and integrated with the rest of the world, Hong Kong would continue to flourish under Chinese sovereignty.

The year that “one country two systems” officially ends — 2047 — will be 100 years after my grandfather decided to seek refuge in Hong Kong. By then, my children will be in their 30s, and they may be long gone. It hurts to think that Hong Kong has become a place that his great grandchildren might flee.

Verna Yu is a freelance writer living in Hong Kong.