Horror calls down to us from northern Nigeria. Most of the 276 schoolgirls kidnapped by Boko Haram rebels last spring are still unaccounted for. On Nov. 10, Boko Haram bombed a high school in Potiskum, killing at least 48 children. Last month, the group killed 48 fish vendors near the border with Chad. And just last week, in apparent retaliation, the central mosque in the city of Kano was bombed, with some 100 people killed.

But fear and religious fanaticism are not new to the north. They are a fate we long ago came to accept. They were already woven into the pattern of life when I was a child there in the 1980s. 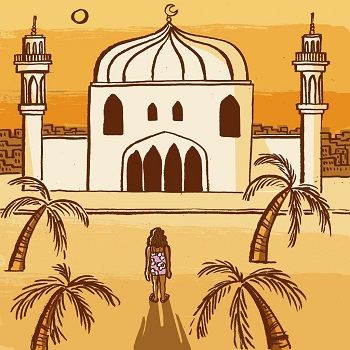 My father arrived in Kano one cold morning in the 1970s, with the dry, dusty harmattan wind blowing south from the desert. He was 23, and like many young Christians from Nigeria’s lush southeast, he had gone to the Muslim-majority north after surviving the bloody civil war of 1967-70. Kano was a new business frontier then. But it was uneasy, too: While Muslims and Christians lived side by side, so did hope and fear.

In December 1980, hope took a terrible blow when Yan Tatsine, a group led by the Islamic preacher Maitatsine, took to the streets in a blaze of violence. Like Boko Haram today, Maitatsine reviled Westernization. He had declared himself a prophet and clashed with the police, but was supported by some Muslim clerics. My father remembers shuddering in fear alongside other Christians in their neighborhood, Sabon Gari, as the bloodshed snuffed out 4,000 lives. Eventually, the Nigerian Army arrived, Maitatsine was killed, and his followers fled to neighboring states to continue their insurgency.

A period of peace in Kano followed. My father married. I was born. My parents were protective — too much so, I thought. They hardly ever let me venture outside Sabon Gari or get near a mosque during Friday Prayer. I could not understand why, and eventually began to rebel.

One day in October 1991, when I was not quite 9, I walked toward a large mosque near our home. It was a Friday, and the street was closed. From afar, I could see worshipers on prayer mats in the road. The mosque’s loudspeakers spewed out anger, and I wondered if this anger was why my parents warned us to stay away. Then, suddenly, worshipers spilled from the building, chanting in Arabic, punching the air with their fists.

I ran home, dazed. Later that evening, we were told that a proselytizing German Christian evangelist, Reinhard Bonnke, planned to visit Kano. The following Monday, tension smothered us like a thick veil. School closed early. Some Muslim classmates and teachers didn’t show up at all. Grown-ups muttered in hushed voices.

We children would later learn that hundreds of Muslim demonstrators had taken to the streets that day, protesting Mr. Bonnke’s visit, and rioting ensued in which Christians were attacked and killed — an estimated 200 in the city and nearby. Then Christians counterattacked, killing Muslims. For hours, I tried to wish away the screams I was hearing. For days, the air stank of burned flesh and decaying bodies on the streets. Mosques lay in ruins, charred.

Two days after the crisis started, the Nigerian Army arrived, and within the week, cleanup crews cleared the streets. But the smell lingered.

At home, we no longer laughed. Father returned to his shop, Mother to her food kiosk and we children to school. We all stayed away from mosques. But in time, our memories of the riot were thrust aside, as if into a dusty closet. We talked about almost anything else: the coming harmattan, how we could taste Christmas on our lips if we threw our mouths open and sucked in the cold air. On Christmas Eve, we played with firecrackers. By morning, we wore new clothes to church. We stuffed ourselves full of rice, goat meat and Fanta. And the decade began flitting by quietly, with little special for a child to remember or mourn.

In 2001, fully grown, I left Kano to live with my husband in Aba, a southeastern city near where my father grew up. The air here, I discovered, bubbles with the people’s unrestrained, stomach-clenching laughter, and for the first weeks it made me jittery. I couldn’t put my finger on why. It was not just the southerners’ boisterous talk, or the shocking Western way the women dressed. Here, girls could wear skirts so short they dared not bend over; their makeup stood out like street signs. And when they talked to boys, they stared them straight in the eyes.

I missed home. On my first visit to the market, I heard a bus conductor call out: “Mosque! Mosque!” I hopped on, and rode to a mosque in front of which men sold suya, a spicy northern meat kebab. I greeted a seller in the north’s Hausa language. Beaming, he returned greetings in Igbo, the language of the southeast. Had I been in the north? he asked. I said I’d just left. I ordered suya, and he served twice as much as I’d paid for. Thanking him, I started to leave. But I kept staring at the mosque.

I realized then what had made me feel unmoored: the absence of fear. I had learned to live with fear in the north. It had become a second skin, and losing it had dazed me. I missed it and the boundaries it set.

I called my parents and told them I wasn’t sure whether I loved this new freedom to laugh loud, to wear red lipstick and miniskirts. Most of the time, I missed Kano itself, and the good memories of peaceful interludes. My mother took to visiting Aba, bearing news of new buildings or improved roads, or simply of peace. My father’s business had expanded. He’d bought a new car. She’d shut her food kiosk to work with him. She wore hope in her eyes, as we used to.

But 2004 brought another riot. Some 300 Christians had died, Mother called to tell me. She said I must never return to Kano. I never have.

Up north, we hear, Boko Haram is the group that spreads fear today. But it has taken cruelty a step further. It focuses its rage on Western education. So its victims are often children.

In the safe southeast, my mind still wanders north. I wonder how the captive girls feel. Do they dare hope for rescue? How does a high-school girl get through the day? Counting the ceiling boards of a cell? Or, worse, dealing with a husband whom Boko Haram has forced on her?

Meanwhile, Christians have relocated southward en masse. Mother and Father live in Onitsha, near me. Father said the Christians of Sabon Gari gave up after a pair of bombings mere blocks from my parents’ home.

They are safe now, but forever marked. Like me and the legions of other Christians who have fled northern Nigeria, Father wears his memories like a badge of loss.

Ukamaka Olisakwe, a Nigerian novelist, is the author of Eyes of a Goddess.